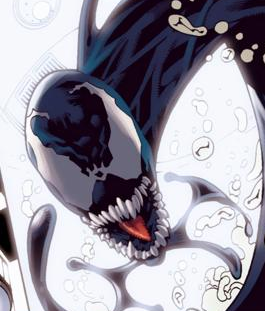 A member of a species of interstellar parasites, the symbiote that later became known as Venom was imprisoned by the other members of its species due to its desire to aid its hosts instead of dominating them. This would be great and all, but for the minor detail that it isn't big on giving its hosts any kind of choice in the matter. An unknown amount of time later, the symbiote's prison was later incorporated into the make up of Battleworld by an entity called the Beyonder. Spider-Man, one of the heroes chosen by the Beyonder to fight in an epic battle of good versus evil, accidentally freed the symbiote while looking for a machine to repair his damaged costume. Taking on the appearance of a jet-black costume with stylized white spider emblems on its chest and back, the "black suit" proved an invaluable asset to Peter, so he brought it with him when he returned to Earth. Desiring to deepen its bond with him, the symbiote began taking over his body as he slept, leaving him more exhausted when he woke up than he had been when he went to bed, causing him to remove it.

Some time afterwards, it bonded to disgraced reporter Eddie Brock. Sensing his hatred of Spider-Man and becoming corrupted by Brock, the two twisted each other's emotions until only their hatred of Spider-Man remained. Rechristening themselves Venom, they would become a threat to both Peter Parker and Spider-Man, using their knowledge of Spider-Man's identity to torment him. Eventually, Eddie, the symbiote and Peter would come to an uneasy truce to leave each other alone, and the symbiote would get up to... a lot afterwards.

The symbiote has been bonded to other hosts over the years, some of whom have taken the Venom identity and fulfilled various roles. Angelo Fortunato bought it at an auction and used it mostly for shits and giggles, Mac Gargan returned it to its supervillain roots, Flash Thompson was the first straight-up heroic version of Venom, and Lee Price used it to better his position in organized crime.

The Venom Symbiote provides examples of the following tropes: