The main antagonists of Season 1. They initially seek to destroy the world's crystals, claiming to be on a quest for revenge against Aldore. Come Season 2, their unarmored versions are Promoted to Playable and Raegen, their leader, becomes a Deuteragonist to Lasswell.

Tropes associated with all of them:

Raegen, Veritas of the Dark 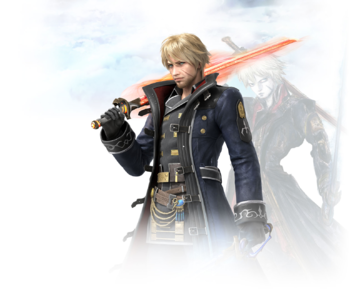 The leader of the Sworn Six and Sworn of the Dark, a valiant man who believes in his friends and deems them as True Companions. After being betrayed by Aldore and having himself and his team banished to Lapis, he starts hatching a plan to get back to Paladia and enact revenge, that is, until Raegen decides that it's just not worth it and deserts the team, leaving it headless, to Citra's extreme chagrin. Citra eventually manages to create a Vision of him from the times of the Independence War, and tries a forceful recruitment of the real Raegen herself, which ends badly when Raegen, now a married man with children, watches his wife take a shot meant for him and die in his arms, causing Raegen to drop even his son to embark on a journey to stop his former companions.

In Season 2, after sorting most of his problems out, he becomes the Deuteragonist, with his own path set apart from Lasswell, and his own party comprised of the other members of the Sworn Six, in his own mission to free Paladia from Aldore's dictatorship.

Citra, Veritas of the Light

Sworn of the Light, and the one truly responsible for the Veritas's plan to destroy the crystals. Originally a loving woman from Moraque with high magic talent, she joined the Veritas out of her desire to be with Raegen. Her joining also caused her sister Sakura, then a preteen, to inadvertently take an operation for her immortal heart in order to join the Veritas, much to Citra's chagrin. Out of the seven surviving Veritas, she became the most obsessed with the plan to destroy the crystals so they could return to Paladia and get their revenge on Aldore. Things start to not go as she expects when both her sister and Raegen decide to abandon the plan, instead taking to a peaceful life in Lapis. Citra doesn't take well to this, which sours her relationship with her sister and puts her at extreme odds with Raegen. To counterbalance Raegen's absence, she manages to create a vision of him from the times of the Hess Independence War, and uses that vision to fool the other Veritas into going along with her plan. Things finally come to a head when Citra tries to get the real Raegen back by force and ends up accidentally killing his wife Sophia, causing Raegen to finally turn against her and take a stance to stop her plan to destroy Lapis.

Cid, Veritas of the Heavens

Sworn of the Wind, a Family Man above all else. He is the first Cid of Dirnado, revered by man and dwarf alike, and his name is granted as a title to the greatest inventor of every generation. He fought the Independence War in Paladia for the sake of his family and his newborn child Mid, but his banishment to Lapis, plus the fact he's the bearer of an immortal heart (meaning he lives without aging while his family dies of old age), caused him to be extremely bitter about life and mankind, and all too willing to participate in the plan to shatter the crystals and return to Paladia.

Folka, Veritas of the Waters 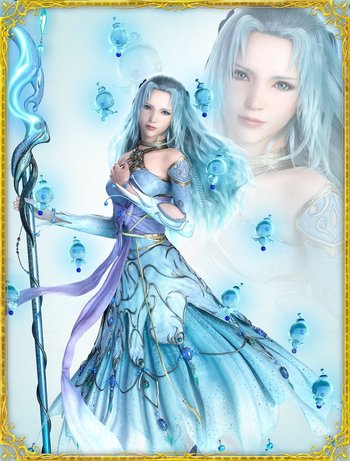 Sworn of Water, a ditzy woman with a chip on her shoulder. While she fought for Vlad's side on the Independence War, her distaste for violence was driving her to madness to the point she decided to use hypnosis magic to brainwash herself in order to stand the horrors of war. Life after banishment in Lapis did her no favors, due to Folka becoming quite the vengeful soul, despite becoming the creator of the bloodline that serves the water goddess Esper, Leviathan, which results as well in the creation of Olderion, meaning she is also ancestor to Nichol, Luka and Elle. When she is recruited to finally put in motion the plan to shatter the crystals so the Veritas can return to Paladia, she brainwashes herself as to not feel any guilt for her acts and hops into action.

Ignacio, Veritas of the Flame

Sworn of the Fire, a blacksmith by trade, and a kindred soul who will make friends with mostly anyone. He joined the Veritas to honor his friend Kagane, who died in service to the Emperor, and it's implied she also was the very reason he became a blacksmith as well. His only reason for participating in the plan to destroy the crystals is being unwilling to take the undeserved banishment to Lapis sitting down, and because after 700 years in Lapis, he feels like he has no other reason to live. Else, he's the most friendly of the Sworn Six.

Sieghard, Veritas of the Earth 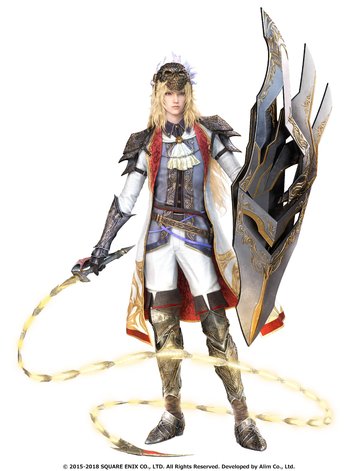 Sworn of the Earth, a noble known for his narcissistic attitude as much as his taste for battle. Despite his attitude, he's one of the most considerate members of the Veritas, to the point he's The Heart of the team. He joined the Veritas only so he could fight alongside or against Fina, while leaving his family behind. His desire for revenge on Aldore isn't as much as a motivation to help the Veritas destroy the crystals in Lapis as much as his desire to fight Fina again is, to the point he goes out of his way to bring the real Fina back from the one that emerged from the Earth Crystal.

Gilgamesh, Veritas of the Frost

A member of the original Sworn Eight of Paladia that fought in the war between Aldore and Hess. He was thought to be dead after the war, but traveled 50 years into the future to the War of the Visions timeline. His armor was taken over by Sir Raegen to counter the current Sworn Six.
Sakura

Sakura, Veritas of the Bolt