Characters featured in Aladdin (2019). For characters of the 1992 animated movie see here. 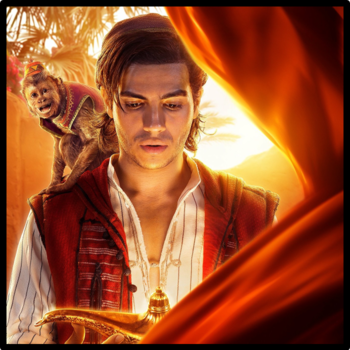 "If you don't have anything, you have to act like you own everything."
Portrayed by: Mena Massoud
♫ "Riffraff," "Street rat"
I don't buy that
If only they'd look closer
Would they see a poor boy?
No, sirree
They'd find out
There's so much more to me... ♫
— "One Jump Ahead (Reprise)"

A street rat who falls in love with the beautiful Princess Jasmine and finds a Genie in a lamp. 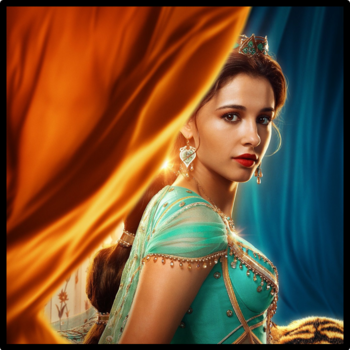 "I was born to do more than marry some useless prince!"
Portrayed by: Naomi Scott
♫ I won't be silenced
You can't keep me quiet
Won't tremble when you try it
All I know is I won't go speechless, speechless! ♫
— "Speechless (Part 2)"

The daughter and only child of the Sultan of Agrabah. She hasn't been seen outside the Palace in years after the death of her mother. 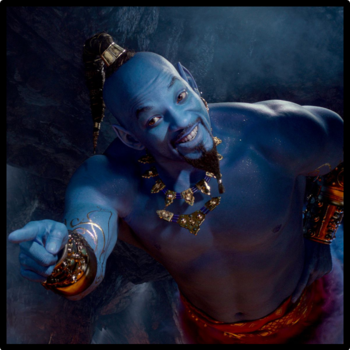 "Excuse me! If I was going to talk to myself, I would have just stayed in the lamp."
Click here to see the Genie as a human. 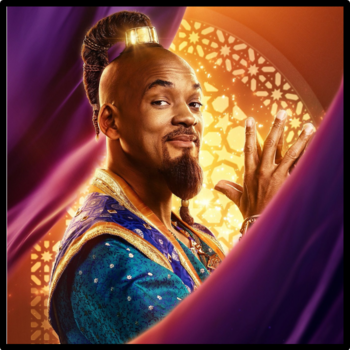 "In 10,000 years... I've never been that embarrassed."
Portrayed by: Will Smith
♫ There's a road that may lead you
To good or to greed through
The power your wishing commands
Let the darkness unfold or find fortunes untold
Well, your destiny lies in your hands! ♫
— "Arabian Nights"

A magical being who has been sealed away within a magical lamp, until he was released by Aladdin. 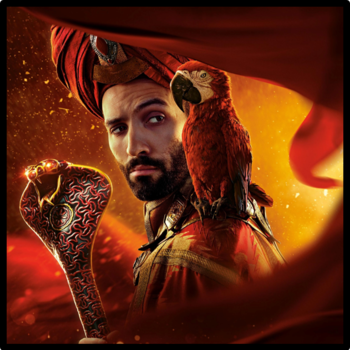 "You're either the most powerful person in the room, or you're nothing."
Portrayed by: Marwan Kenzari
"Another petty insult from that slow-minded fool. He sees a city where I see an empire. Such vision. Once that lamp sits in my hand, then I shall sit on his throne."

The Sultan's Grand Vizier, whose goal is to take over Agrabah by seizing the throne. To do this, he seeks the Lamp of the Genie. 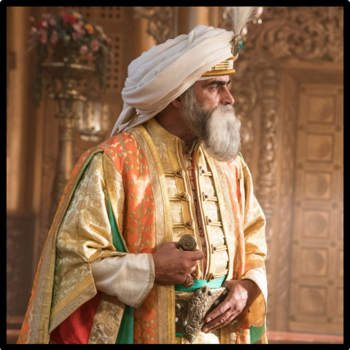 Portrayed by: Navid Negahban
"My dear, I'm not getting any younger. We must find you a husband and ... we are running out of kingdoms."
Dalia 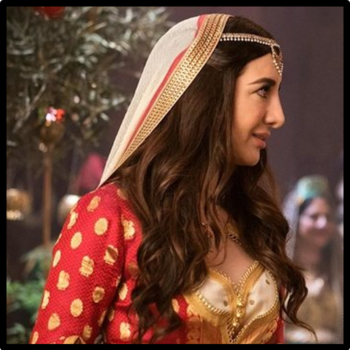 "A handsome prince wants to marry you. Oh, when will life get easier?"
Portrayed by: Nasim Pedrad
"If you had to marry a useless prince, you could certainly do worse than this one. He's tall and handsome, and yes, he's a little dim but, you're just getting married. It's not like you have to talk to him. But you'd prefer that boy from the market."

Hakim
Portrayed by: Numan Acar
"I am loyal to my sultan. As you should have been. The law is the law."

Aladdin's pet monkey who has a natural gift for thievery.

An enchanted carpet that has been trapped under a rock in the Cave of Wonders for an untold time. It is eventually freed by Aladdin and Abu.

The Cave of Wonders
Voiced by: Frank Welker
"Only one may enter here. One whose worth lies far within. A diamond in the rough."

A sentient cave who judges who may enter and claim the Genie's lamp.

Prince Anders
Portrayed by: Billy Magnussen
The Prince of Skånland who is seeking Jasmine's hand in marriage.