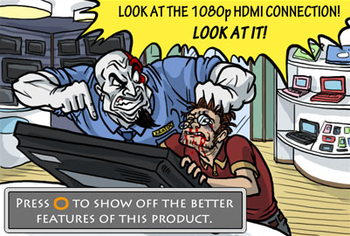 Found in RPGs and Action-Adventure games, this requires players to execute a command, such as a button press or joystick rotation, within a certain window of time. Mostly used during combat situations, proper execution will reward a player, often with a bonus to attack or defense or with recovery items. Implementation usually differs between the two genres.

Not to be confused with Combos. Action Commands have a limited-time period to be activated, and they're usually no more than a few button presses and/or joystick rotations, as opposed to a longer string (though a game can require several Action Commands to be performed in a row). Also can be different from the Context-Sensitive Button, depending on the game: in some cases, the Action Command's essential function never differs, and it's primarily used in combat situations. In other cases, there are many possible actions in many various situations, but only so many buttons on the controller, of course. This is especially noticeable if one particular sequence of actions is not executed with the same sequence of button presses every time.

In RPGs, executing Action Commands while striking the enemy may result in greater damage than usual, or successfully triggering an action command when the enemy strikes may trigger a defensive maneuver that reduces the damage received (or evades the attack altogether). It also serves as a way to keep players more engaged in the game: Rather than just clicking through the menu commands repetitively, players can receive a bonus for paying attention to the actual gameplay that results.

In Action Adventure games, players receive a visual cue in the main window, often connected to the targeted enemy. Action commands allow the player to kill regular enemies more efficiently, and are sometimes necessary to defeat more advanced enemies (especially bosses). Again, it serves to reward players for attentive gameplay, rather than simply Hack and Slashing their way through. Compare the Counter-Attack, which usually does not have an overt visual cue.

Action Commands that occur during otherwise non-interactive Cutscenes, as a means of subverting or averting Cutscene Power to the Max and/or Cutscene Incompetence, are known as Press X to Not Die (also known as Quick Time Events).

The Ur-Example is the arcade game Dragon's Lair, where players controlled Dirk the Daring in his quest solely by performing well-timed Action Commands guided by on-screen cues.

Not to be confused with Squad Controls.