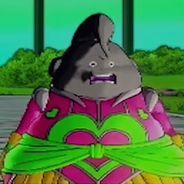 Go here to see their other funny moments.

open/close all folders
Dragonball Xenoverse ("The Adventures of Dumplin")
(conversation trails off)
(everyone goes "Hm" for a while)
Lani: DUMPLIN!
(everyone cracks up)
(screen displays "Final Battle! My Full Power!")
Kaiser: Final Power! - (everyone cracks up again)
Lani: FINAL POWER! MY FULL BATTLE! My fully operational battle!
Dragonball Xenoverse 2 ("The Adventures of Puddin")
Closed Beta version

After the Hero Colosseum update they turn the figure battles into a new Nuzlocke to make it more interesting. The names they give their figures are also amusing. For example, calling first form Freeza "Tyrannosaurus Sex" or calling final form Freeza "Amir", which is short for "A Myriad of Sex Toys".