Leading characters
These are the primary protagonists of The Witcher saga: the unlikely family of witcher Geralt, sorceress Yennefer, their adopted child Ciri and narrator Dandelion.

For other characters in the saga, go here.

open/close all folders
Geralt of Rivia 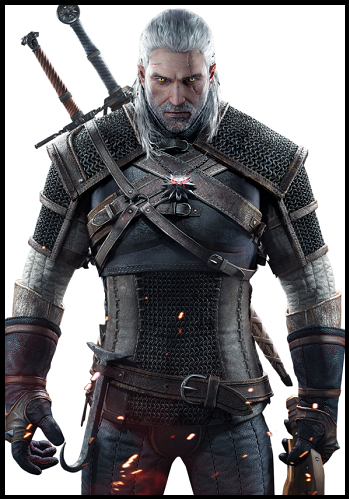 "Either leave on your feet or die on your back."
Appears in: Season of Storms | The Last Wish | Sword of Destiny | Blood of Elves | The Time of Contempt | Baptism of Fire | Tower of the Swallow | Lady of the Lake | The Witcher | Assassins of Kings | Wild Hunt | The Hexer | The Witcher (2019)
Voiced by: Doug Cockle (English), Jacek Rozenek (Polish), Kazuhiro Yamaji (Japanese/games), Hiroki Tochi (Japanese/Netflix series), José Gilberto Vilchis (Latin American Spanish/Netflix series)
Portrayed by: Michal Zebrowski (The Hexer), Henry Cavill (Netflix series)
"You send assassins after me, conjure up beautiful words, threaten to kill me. But you're scared to death and simply postponing the inevitable."

The protagonist (or co-protagonist) of all the media set in the Witcher's world. He is a, if not the witcher — a mutant created through alchemy and black magic to create an ultimate killing machine, he was in fact such a success compared to the other boys who underwent the Changes that he was subjected to additional processes that bled his hair white and took the pigment from his skin, but the benefits in return were many-fold. Geralt is the epitome of a professional monster-hunter, courteous, meticulous and devoid of emotional hangups. At least, he'd love to assure you and to be assured of that last bit. He made his name removing the Striga curse from the Temerian princess, Adda, and over the years, his visage has became legend in the Northern Kingdoms. 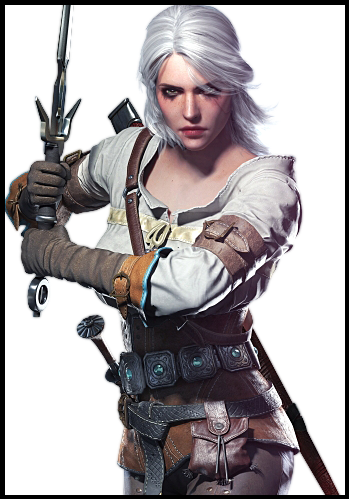 A Cintran princess, the Unexpected Child, Child of Elder Blood, and Geralt's adopted daughter, Ciri is an unassuming girl who has notable royal nerve, yet even more notable political and dynastic claims, and is the last descendant of a unique legacy. She appears first in the short stories, but becomes a co-protagonist in the Saga. She's but a child during her first appearance, but the events of the Saga lead (and force) her to grow up fast. 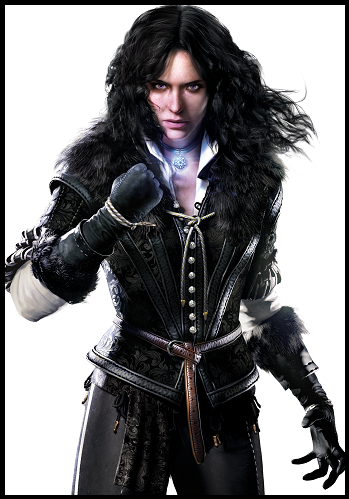 "I would like to ask you not to hurt my daughter. I do not want to die with the notion that she is crying."
Appears in: Season of Storms | The Last Wish | Sword of Destiny | Blood of Elves | The Time of Contempt | Baptism of Fire | Tower of the Swallow | Lady of the Lake | Assassins Of Kings (Flashbacks only) | Wild Hunt | The Witcher (2019)
Voiced by: Denise Gough (English), Beata Jewiarz (Polish)
Portrayed by: Anya Chalotra (Netflix series)
Ciri: What is there between you and Geralt, Lady Yennefer?
Ciri almost fainted, horrified at her own impertinence, chilled by the silence which followed the question.
The enchantress slowly approached her, placed her hands on her shoulders, looked her in the eyes from up close – and deeply.
Yennefer: Desire. Regret. Hope. And fear. Yes, I don't think I have omitted anything. Well, now we can get on with the tests, you little green-eyed viper.

A sorceress who dotes on Ciri as the daughter she can never have and who is also the love of witcher Geralt's life. They met each other long ago, and afterwards had a truly legendary string of breakups and makeups, as befitting a moody killer and a strong-willed sorceress. Though they are in separation at the beginning of the Saga, at Triss' advice Geralt asks her to help with Ciri's training, and so she becomes an adoptive mother to Ciri. 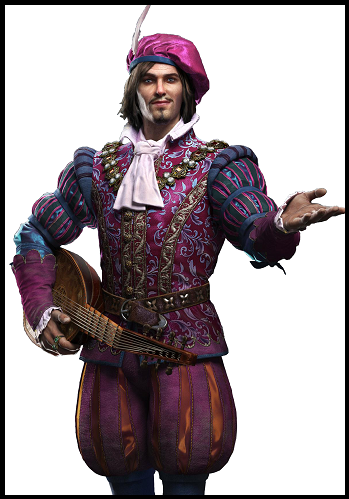 "Geralt, you have no sense of poetry. There's the truth of time and the truth of legend."
Appears in: Season of Storms | The Last Wish | Sword of Destiny | Blood of Elves | The Time of Contempt | Baptism of Fire | Tower of the Swallow | Lady of the Lake | The Witcher | Assassins of Kings | Wild Hunt | The Witcher (2019)
Voiced by: Tim Beckmann (The Witcher, English) , John Schwab (Assassins of Kings and Wild Hunt, English) , Jacek Kopczyński (Polish)
Portrayed by: Joey Batey (Netflix series)
"My love poems! Some bastard stole them recently. Probably wanted to show off to a young lass smelling of sheepskins. I really missed this book. It was like being in a brothel with no balls. I owe you one, Geralt, though I don't know quite how I'll repay you. No... Actually, I do know. Up for a shot on vodka? It's on me."

A famous bard and Geralt's old friend. He was a character introduced back in the short stories, and appears in the Saga as well, following the witcher in his quest despite cowardly tendencies and a lack of combat abilities.