Characters / The Witcher - Lodge of Sorceresses

A secret society of female magic users in The Witcher saga. They attempt to affect the North from behind the scenes after the fall of the Conclave. They have served as both ally and enemy to Geralt of Rivia. For other characters in the saga, go here. 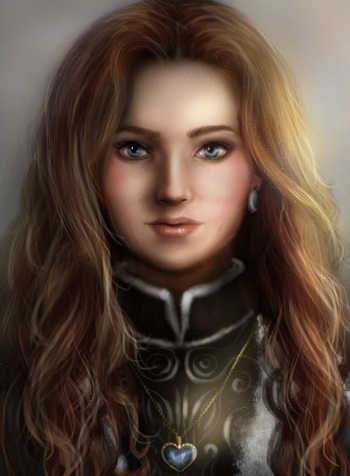 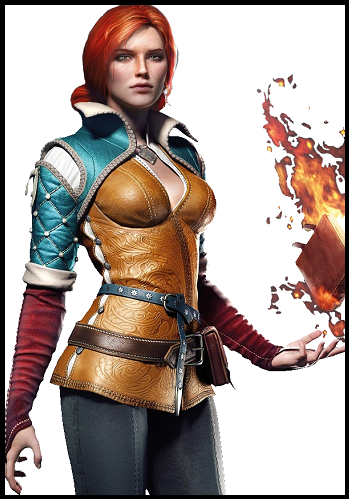 "You wish, witcher!"
Appears in: Blood of Elves | The Time of Contempt | Baptism of Fire | Tower of the Swallow | Lady of the Lake | The Witcher | Assassins of Kings | Wild Hunt
Voiced by: Jules de Jongh (The Witcher) and Jaimi Barbakoff (Assassins of Kings and Wild Hunt)
"Before we stood on that hill the Chapter simply told us: 'That is what you have to do.' Whose war was it? What were we defending there? The land? The borders? The people and their cottages? The interests of kings? The wizards' influence and income? Order against Chaos? I don’t know! But we defended it because that's what had to be done. And if the need arises, I’ll stand on the Hill again. Because if I don’t, it will make the sacrifices we made the first time utterly futile."

The sweet-tempered yet tough-as-nails auburn-haired sorceress from Maribor. A good friend of Yennefer's who just so happens to be utterly smitten with the White Wolf. Geralt, (mostly during his breakups with Yen) was only too happy to reciprocate her affections. As the first of Ciri's tutors, she makes the witchers realize they can no longer just keep Ciri hidden in their mountain castle, and thus has her hand in jump-starting the events of the saga. Later she also becomes a member of the Lodge of Sorceresses, mainly because of her devotion to keeping the Art alive during Times of Disdain but at no cost to the Northern Realms; which she defended alongside Yen at the Battle of Sodden Hill. Triss is a brave and loyal friend to the main three protagonists, yet she has found that trying to secure a place within the trio's family unit has often resulted in unforeseen disaster... 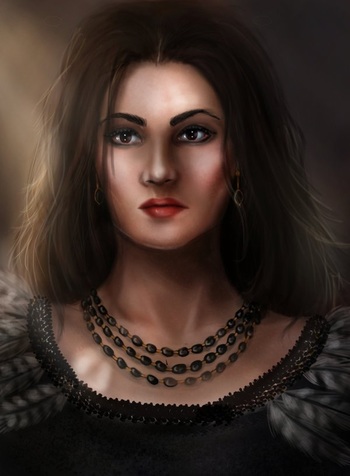 "Triss, stop thinking with your vagina."
Appears in: Blood of Elves | The Time of Contempt | Baptism of Fire | Tower of the Swallow | Lady of the Lake | Assassins of Kings | Wild Hunt
Voiced by: Pandora Colin
"I couldn’t help notice the tension between you and Yennefer and Triss. It's very hard on Ciri, I think. There are times I doubt you three realize how it looks. Triss plays the big sister to Ciri, but eagerly awaits a chance to hop in bed with you. You and Yennefer play the parents — "

Undoubtedly the most cunning sorceress on the Continent. She was King Vizimir's trusted adviser for many years, and remained in Redania's court even after his death (for which she was most likely responsible), to act as regent and tutor his son and heir, Radovid. She is also one of the few magic-users to possess the ability to polymorph. Neither friend nor foe to the main protagonists, she led the Thanedd coup against the Council and Conclave alongside her ally and former lover Dijkstra, aiming to neutralise suspected traitors allied with Nilfgaard. The events of the saga cause her to found and lead the Lodge of Sorceresses, in order to protect the interests of magic and rule the world from behind the scenes.

But despite all of Phil's prowess at politics and intrigue, her hubris has cost her many times, from humiliation to mutilation, and her lack of moral qualms does not make her many friends. 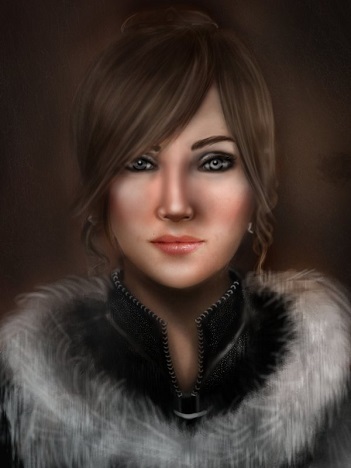 "Yenna, for once, don't argue with him."
Appears in: The Time of Contempt | Baptism of Fire | Tower of the Swallow | Lady of the Lake | Assassins of Kings | Wild Hunt
Voiced by: Nicola Walker
"The power of magic is sometimes hard to believe, Your Majesty. And so, indeed, it should be."

A sorceress from the kingdom of Creyden who is known for her reserved nature and one of the founding members of the Lodge of Sorceresses. Queen Zuleyka of Kovir sought her magical assistance in getting her son away from the evil influences of the "bad crowd" he had fallen in with and it was the Koviri Loner's machinations that lead to Sigi's successful loan application for foreign mercenary companies during the Second Nilfgaard War. In the second game, she was sent to Kaedwen and tasked by King Henselt with finding a cure for his infertility which in turn leads her to Flotsam and a hunt for the kayran. 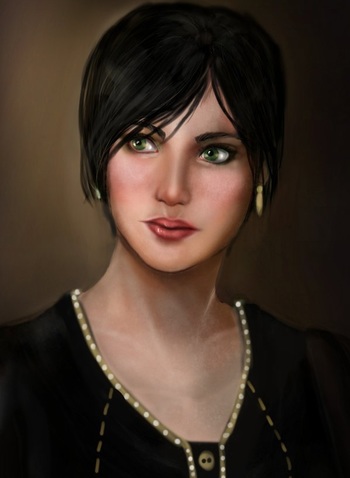 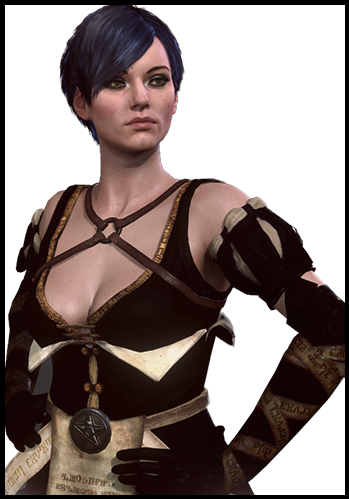 "What do you want to prove by killing another monster from some cave? Your manhood? I know a better way."
Appears in: Baptism of Fire | Tower of the Swallow | Lady of the Lake | Wild Hunt
Voiced by: Laura Rogers
"I knew what I was doing when I began this dangerous game. Luckily, I also know how to deal with the consequences. In this regard, I have more than other women."

A short ebony-haired resident sorceress from Toussaint, who has been recruited by Philippa into her all-inclusive feminine conspiracy while at the same time operating as a double agent within the Imperial Court itself. When the hanse finally reaches the cheery and overlooked principality of Nilfgaard, she assumes an ostensibly advisory role to the group while Dandelion keeps them in the lap of luxury, and even takes Geralt as a lover when told to seduce him by her sisters in magic. This is in order to manipulate Geralt's band into sedentary activity according to the plans of the Lodge... But who is seducing who? 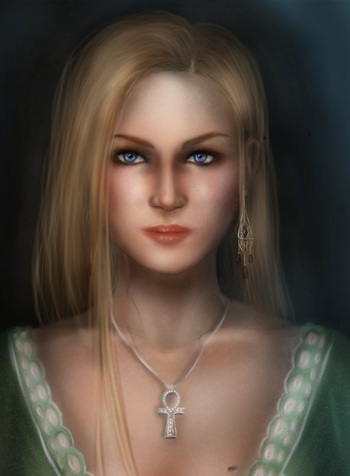 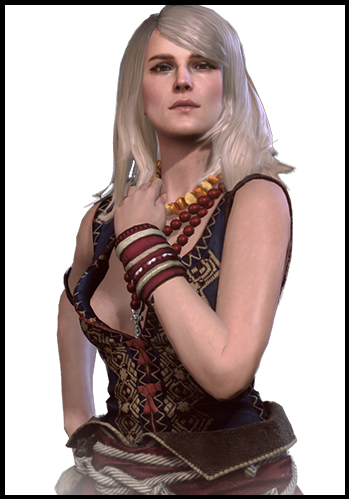 "Neckline too modest?"
Appears in: The Time of Contempt | Baptism of Fire | Lady of the Lake | Wild Hunt
Voiced by: Katie McGuinness
"I'm so pleased the world is still able to astound you, Geralt. I actually envy you that sense of wonder. Common in children, knights-errant and morons."

A member of the Lodge of Sorceresses and an acquaintance of both Triss Merigold as well as Yennefer. She is a good deal friendlier and more approachable than the majority of the Lodge of Sorceresses being the only other junior Nordling on the council alongside Triss and Yen. She is a minor character in the main saga, literally falling on top of Geralt during the Thanned Coup but she receives a great deal more development in The Witcher 3: Wild Hunt. Originally hailing from Carreras. She is a former advisor to King Foltest of Temeria, a role that has also been held by Triss Merigold, and Fercart. She is fond of luxury, despises the dirtiness of the outdoors, and is rather eccentric in nature. She makes aphrodisiacs, and is considered to be a nymphomaniac by Sabrina Glevissig. 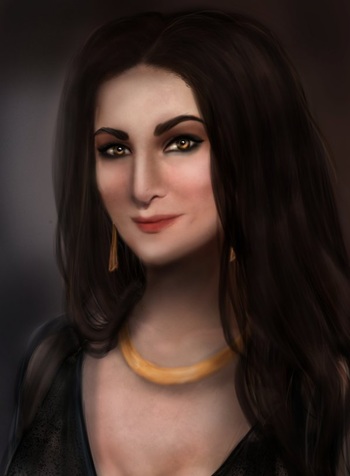 Click here to see her in Assassins of Kings. 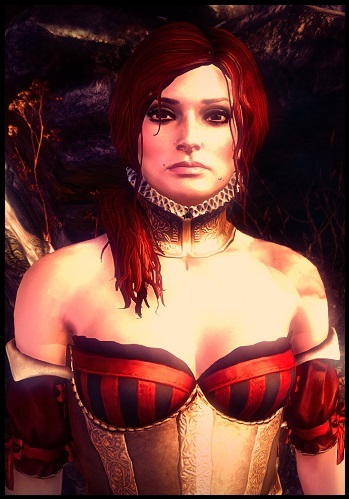 Appears in: The Time of Contempt | Baptism of Fire | Lady of the Lake | The Witcher | Assassins of Kings

Sabrina Glevissig was a short-tempered sorceress serving as an advisor to King Henselt. After the Witcher saga, she participated in Henselt's campaign to conquer the Pontar Valley. When Sabrina cast a spell that killed many Kaedweni soldiers and cost Henselt the war, the king had her executed. 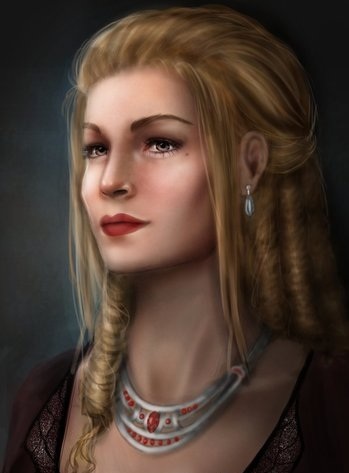 Appears in: The Time of Contempt | Baptism of Fire | Lady of the Lake | Wild Hunt
Voiced by:

The rector of the magical academy of Aretuza. Unlike most of her colleagues in the Lodge, Rita joined not for power but to ensure that her school and students were secure from outside interference and danger. 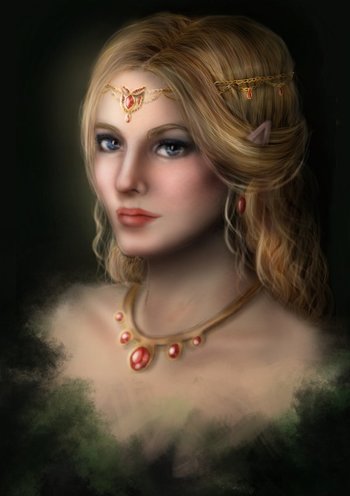 Appears in: The Time of Contempt | Baptism of Fire | Lady of the Lake

Queen of the elven kingdom of Dol Blathanna. Also known as Enid an Gleanna, the Daisy of the Valley. Francesca aided Nilfgaard in return for the empire establishing Dol Blathanna. 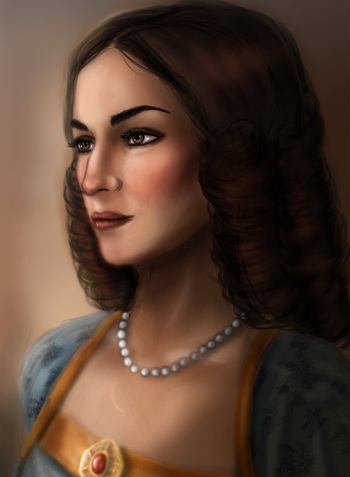 Click here to see her image in the games. 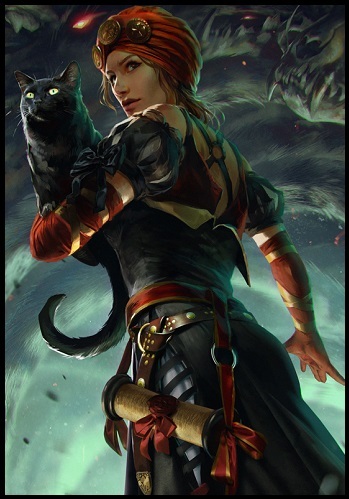 Appears in: Baptism of Fire | Tower of the Swallow | Lady of the Lake | Assassins of Kings

A sorceress from Nilfgaard. Although as apolitical in public as any other Nilfgaardian magician, in secret she admitted to dissident views to her friend and fellow southerner Fringilla Vigo. In turn Fringilla, who as an inhabitant of Toussaint had fewer restrictions thrust upon her, invited her into the Lodge as the second representative of the south. 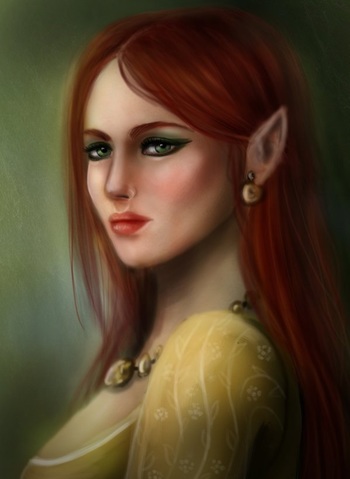 Appears in: Baptism of Fire | Lady of the Lake | Wild Hunt
"The time of the White Frost and White Light is nigh."

An Aen Saevherne, an elven sage, introduced into the Lodge by her friend Francesca as an expert on the finer points of Elven prophecies and the Elder Blood. Ida resides somewhere within the Blue Mountains.