One of the most powerful Northern Kingdoms. Across the Pontar River in the north, the kingdom borders Redania. To the south and east it is hemmed in by mountain ranges, with Mahakam to the east. 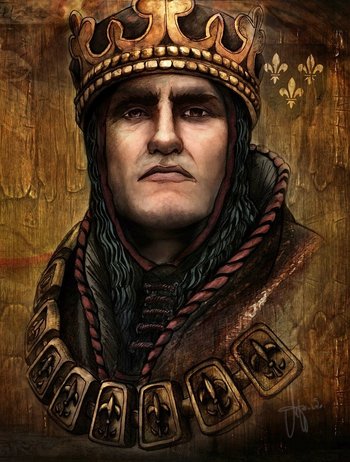 The "arrogant, sister humping, warmongering" king of Temeria, as well as a whole bunch of other places he beat into submission. A major presence in the first game, and his death starts the plot of the second. 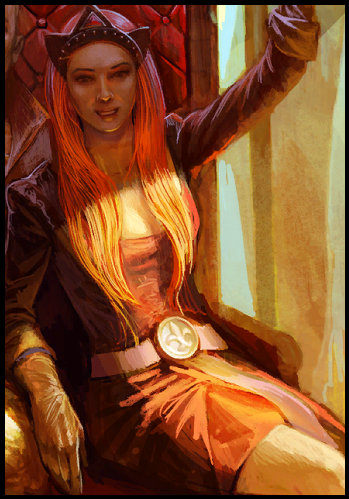 Appears in: The Last Wish | The Witcher

Daughter of King Foltest and his sister, who was also called Adda. Their incestuous union spurned the wrath of numerous people, at least one of whom arranged for a curse to be placed on the child before she was born. Geralt was the one responsible for dispelling the curse, an act that earned him widespread fame. 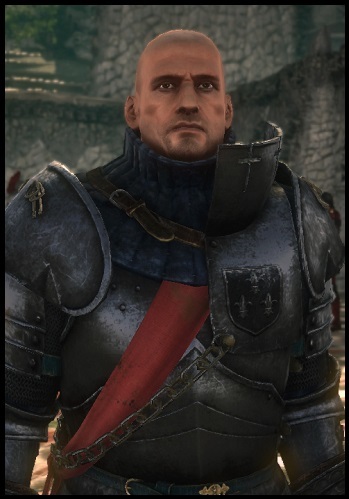 Appears in: Lady of the Lake | Assassins of Kings
Voiced by: ??? (English), Vladimir Antonik (Russian)

One of Temeria's greatest military commanders. After the assassination of King Foltest, Natalis served as Interrex until an heir could be determined.

The commandant of Flotsam’s town watch, Loredo is a corrupt slug who runs over his town like it’s his own personal fiefdom. He soon contacts Geralt for work and eventually butts heads with the Witcher, greatly lowering his own life-expectancy in the process. 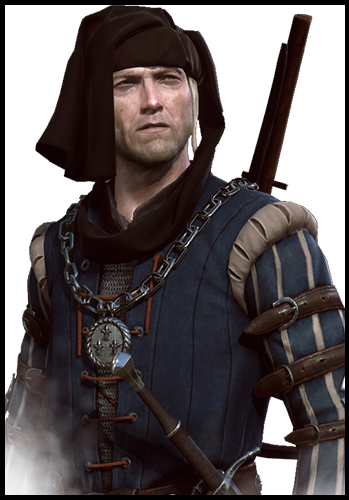 "How did she—? Where? Why? ... How the fuck?"
Appears in: Assassins of Kings | Wild Hunt
Voiced by: Mark Healy (English), Konstantin Karasik (Russian)
"It's a soldier's job to kill, Ves! Not save, not rescue! If that is not to your liking, join the Sisters of Melitele, study to be a healer. Fucking hell..."

Commander of the Blue Stripes, a Temerian special forces unit tasked with handling nonhuman guerrillas and all manner of threats requiring the use of cold-blooded professionals. He helps Geralt break out of the La Valette dungeons in the Prologue under the condition that he help Vernon capture the Kingslayer. 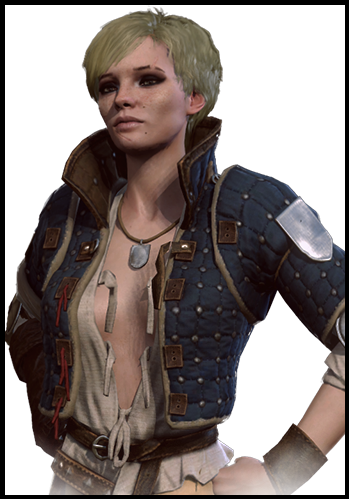 "If you think I don't like to hear comments about my beauty; you're very wrong. I may be a soldier but I'm also a woman."
Appears in: Assassins of Kings | Wild Hunt
Voiced by: Laura Rogers (English), Svetlana Bogatsky (Russian)

The Blue Stripes' second-in-command. She was rescued by Vernon's unit from elvish partisans when she was a teenager and has been fighting in the Temerian special ops outfit ever since. 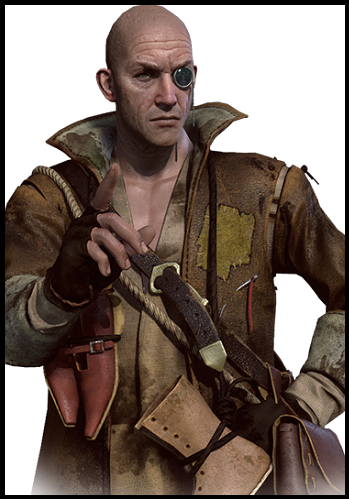 A fence in Vizima. Actually a member of Temerian intelligence. 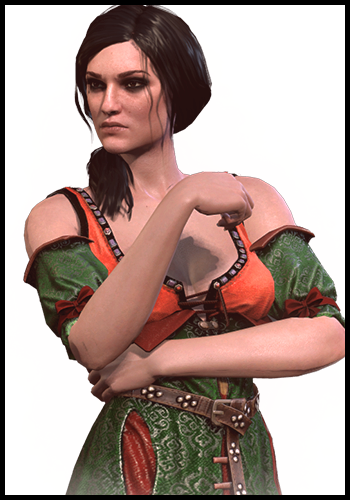 The wife of Old Baron La Valette, Maria was also the not-so-secret mistress of King Foltest, with her two youngest children being widely acknowledged as his bastards. This led to a revolt by the Baroness and several other nobles which Foltest eventually crushed by besieging her castle, although his own life ended when he was assassinated at the end of the siege. After escaping to Novigrad, Maria allied herself with Nilfgaard during the Third Northern War. 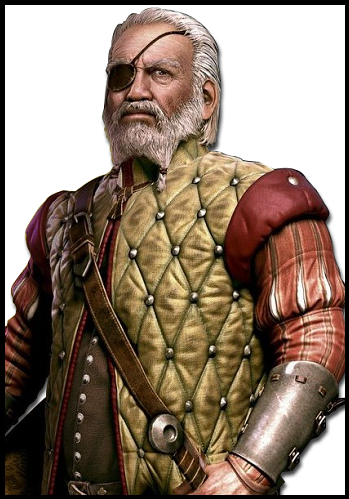 Appears in: Assassins of Kings
Voiced by:

A distant cousin of King Foltest and one of the most powerful nobles in Temeria. He was one of the potential successors of Foltest and sought to eliminate his rival contenders for the crown. 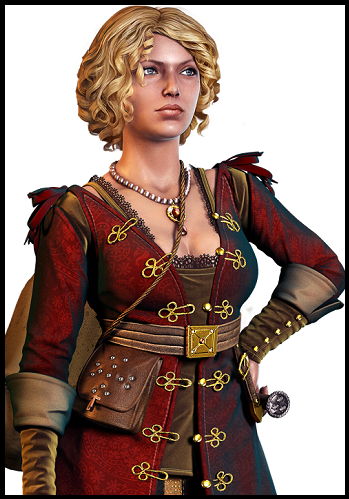 Appears in: Assassins of Kings
Voiced by: ???

A young courtier in the court of Temeria. She is recruited by Vernon Roche to be the Blue Stripes eyes and ears in the court and to watch over Foltest's bastards.

The spiritual leader of Vizima's Outskirts and a chaplain of the Eternal Fire.

A young beautiful cunning-woman and herbalist who lives in the Outskirts of Vizima, far from the townspeople that hug the city's walls. Though many view her with mistrust as a witch, they must also swallow their unjust suspicions and go to her for ointments, poultices, potions and other medicinals.

The commander of the Viziman city watch. A harsh, but ultimately fair man who proves to be extremely loyal to those he trusts. He tends to disappear at night and no one knows where he goes.

A reclusive and driven detective living in the Temple Quarter of Vizima. He help's Geralt uncover information on the Salamandra during Chapter II. 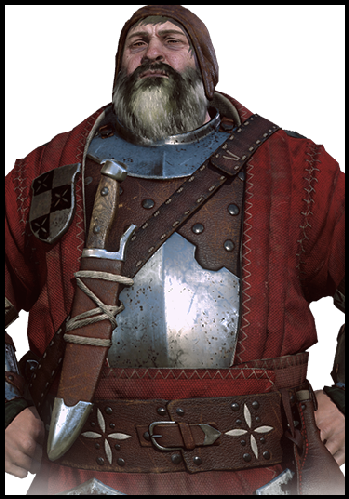 The Bloody Baron is the ruler of the Velen region, a No Man's Land existing between the Nilfgaard and Redanian fronts. A former Temeranian soldier, he deserted from their army and proceeded to take over the region with his army and the backing of Nilfgaard. He is a angry, bitter drunk who is missing his wife and teenage daughter.

The wife of the Bloody Baron, who went missing along with their daughter. It's revealed that she suffered years of physical abuse at his hands. 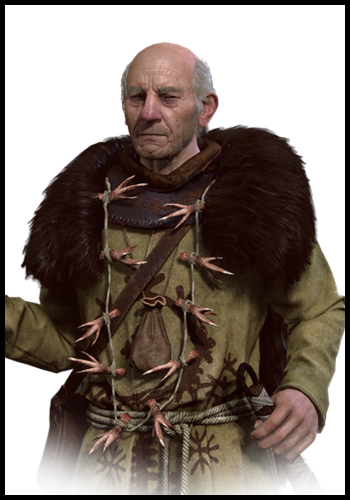 The soothsayer, charmer, diviner, and healer of Velen. He lives in an isolated hut near the village of Blackbough with his goat Princess. 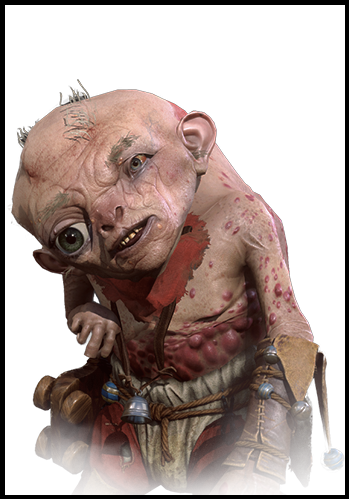 Uma is a tiny malformed creature full of boils, first encountered in Crow's Perch, held captive as a form of entertainment for the Baron's men. He is mentioned again in the main questline in Skellige, where he emerged from a boat Ciri used. His appearance is found to be the result of a curse. Geralt recovers him from Crow's Perch and brings him to Kaer Morhen, where his curse is lifted by Geralt and company by mixing the Trial of the Grasses with Yen's magic, revealing Uma to be Avallac'h. 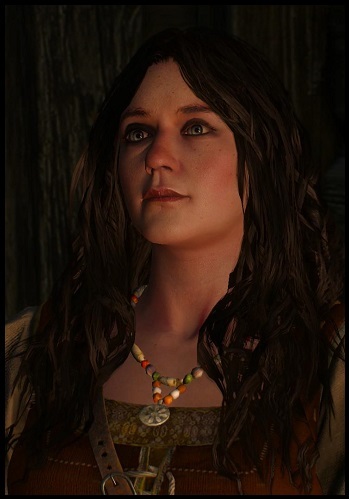 A local herbalist, Tomira assists Geralt in several tasks he undertakes while in White Orchard searching for Yennifer.

A dwarven blacksmith in White Orchard, Geralt assists Willis with tracking down the arsonist who burned his forge down in exchange for his smithying skills.