Characters / The Witcher - Other Characters

Other characters
Geralt and the others met many people, not all of whom were hostile. Some of them were. Others were friendly. Others yet were both or neither, clashing or cooperating with the heroes for their own reasons. For other characters in the saga, go here.
open/close all folders
Church of the Eternal Fire
Caleb Menge 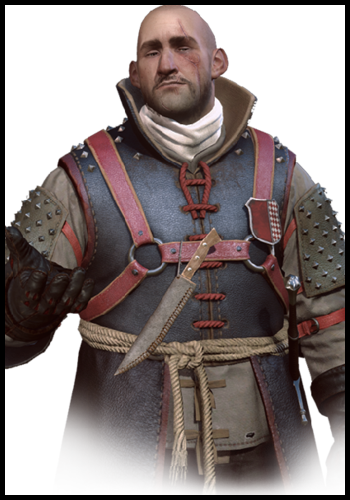 The fanatically ambitious commander of the Church of the Eternal Fire's Temple Guard. He is the individual who is handling the persecution of witches, sorcerers, and alchemists in Novigrad. 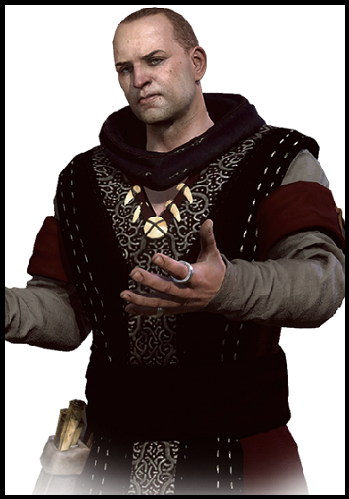 A priest of the Eternal Flame who serves as supervisor of the Novigrad city morgue.

Order of the Flaming Rose

And Order of Knights that defend the Church of Eternal Fire. They are very racist towards anybody who isn't human. 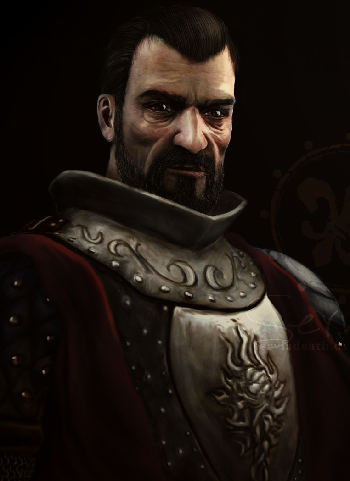 "You return, Sire. I trust you are not too late... Your kingdom, is in need."
Appears in: The Witcher
Voiced by: Andrew Wincott (English), Dmitry Filimonov (Russian)
"Our objective is a new world, a new order that will come after the White Frost. A world in which all will get what they merit, not by birth or through connections. A world where the strong help the weak and crime is duly punished. A world of clear principles and ideals!"

The founder of the Order of the Flaming Rose and its current Grand Master. Fanatically opposed to nonhumans. 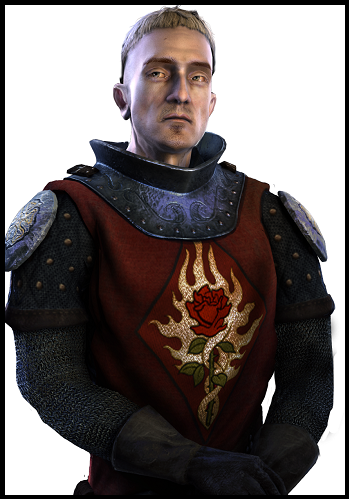 A knight of the Order of the Flaming Rose. He is one of Geralt's contacts in the first game. A well-meaning knight who just so happens to be terribly misguided. 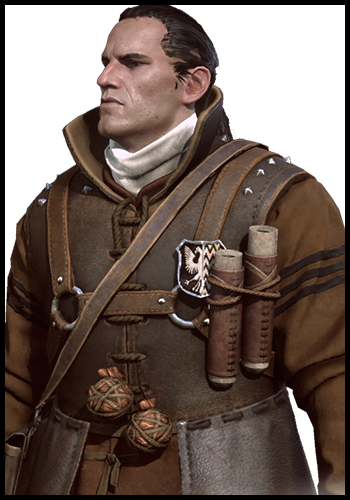 A witch hunter stationed in Oxenfurt who has more morals and decency than many of his compatriots. He recruits Tamara Strenger into the Church of Eternal Fire and trains her as a witch hunter. 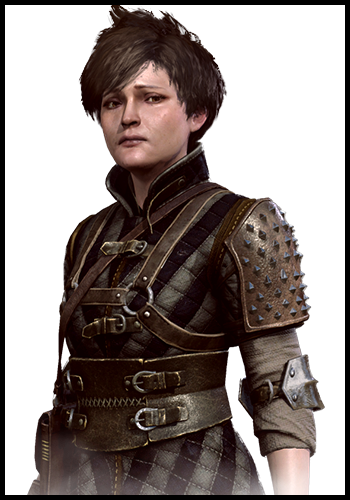 The daughter of the Bloody Baron who ran away with her mother. She ends up joining the Eternal Fire as a Witch Hunter. 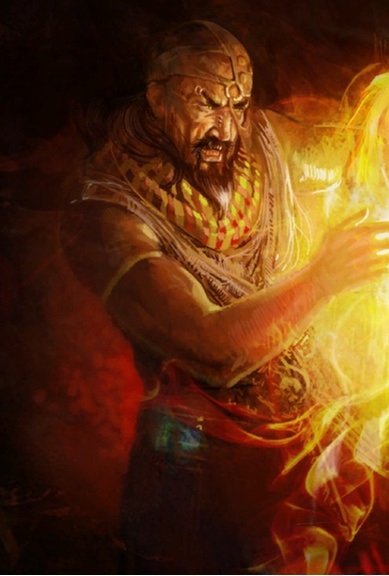 "Allar Zarh Bin Talla!"
Appears in: The Witcher
Voiced by: Stanley Townsend (English), Konstantin Karasik (Russian)
"Before I kill you, you must know... Triss Merigold is being dragged to the laboratories as we speak. Torture will follow. Everyone breaks sooner or later. It's merely a question of time. What say you, witcher? Still the indifferent tough guy?"

A powerful Zerrikanian mage and leader of the criminal organization known as Salamandra. It's his attack on Kaer Morhen and subsequent theft of the witcher's secret stash of mutagens that sets the plot of the first game in motion. 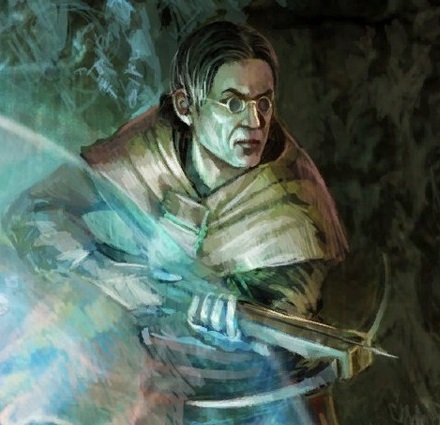 "Your time nears its end, witchers. Enjoy things while you can!"
Appears in: The Witcher
Voiced by: Steve Perring (English), Nikita Prozorovsky (Russian)
"No doubt your life will end soon and how useless it's been! You'll die knowing you were an aberration..."

A sly assassin and Azar's right hand, participated in the raid of Kaer Morhen. 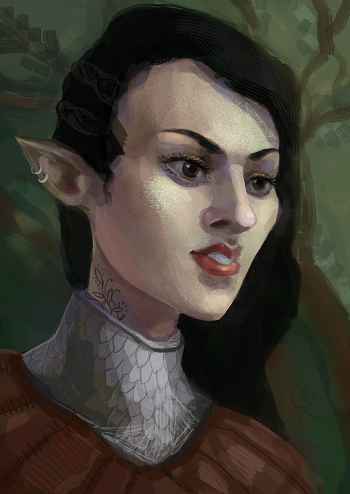 "I'd gladly kill you from up close, stare in your eyes... But you reek, human."
Appears in: The Last Wish | The Time of Contempt | Baptism of Fire | Lady of the Lake | The Witcher
Voiced by: Anastasia Travers (English), Elena Ivasishin (Russian)
"It's at times like this, I almost believe we can end the spiral of hatred between our races."

Toruviel aep Sihiel is a free elf from Dol Blathanna and a subject of Filavandrel. After capturing Geralt and Dandelion during the events of Edge of the World she acted with cruelty towards them, to which the witcher (despite being in bonds) responded with equal cruelty. Later, after the creation of the anti-human Scoia'tael commandos under Emhyr, she joined the fight against the Northern Kingdoms, even taking part in the Battle of Brenna. Abandoned by a shattered Nilfgaard's Centre Army and fleeing the battlefield, she and her unit nearly starved to death but she received food from merciful humans, which had a profound impact on her attitude. 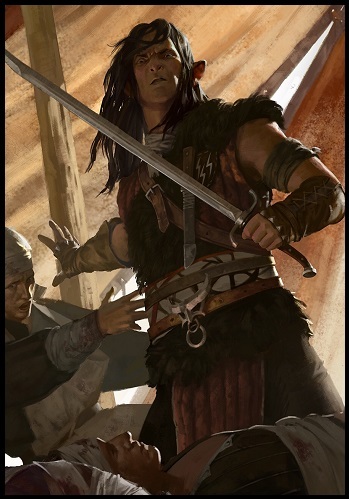 Appears in: The Time of Contempt | Lady of the Lake | The Witcher
Voiced by: Jay Simon (English), Vadim Maksimov (Russian)

A lieutenant in Toruviel's Scoia'tael commando. He eventually came to control his own unit in the swamps west of Vizima. He has more of a penchant for flowery words and metaphors than even most elves, perhaps rivalling Dandelion alone in his prose. Yaevinn participated in the second war with Nilfgaard. During the Battle of Brenna, he was Lieutenant Colonel of the Deithwen division and participated in numerous war crimes. 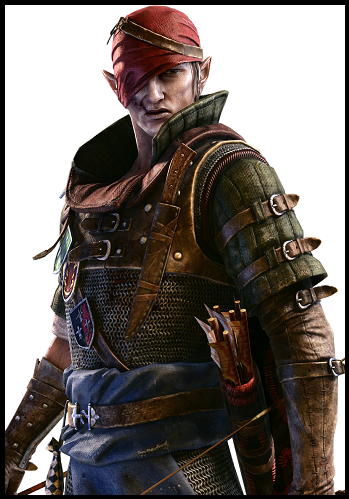 "King or beggar what's the difference? One d'hoine less."
Appears in: Assassins of Kings
Voiced by: Mark Frost (English), Sergey Smirnov (Russian)
"Yet race is the very reason we fight. We have pointed ears, yours are rounded. We are few yet long lived, your kind multiplies like vermin - though thankfully expires quickly."

An infamous elven terrorist, with a burning hatred of humans. Pushed to the fringes of society by the slow death of their race, he and his unit are responsible for the razing of many human villages and countless civilian deaths. He was the commander of the last Scoia'tael commando squad to be broken during the second war with Nilfgaard. One of the elves under his command was Echel Traighlethan who was captured by the Redanian Secret Service and brought to Drakenborg to be hanged. During the armistice, he was one of the only two who survived the massacre of the Vrihedd Brigade at the Ravine of the Hydra, following the peace of Cintra. His survival left him hideously scarred and near death but he resurfaced years later as the leader of an unrivalled Scoia'tael band that won guerilla warfare victories all over the Northern Kingdoms. From the dense forests surrounding the trading post of Flotsam, he aided the Kingslayer with his resources; until he gained the attention of Vernon Roche... 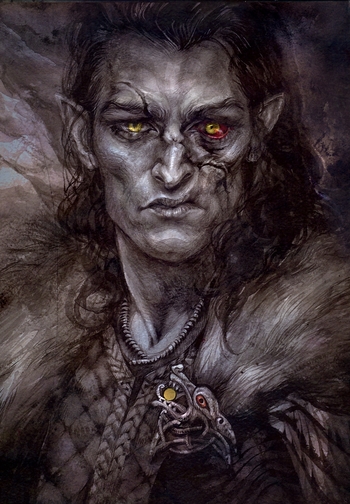 Appears in: Baptism of Fire | Lady of the Lake

A former prominent leader amongst the Scoia'tael and a key player during the Thanedd coup. During the second Nilfgaardian invasion, he fought alongside the Black Ones, only to be turned over by them as a scapegoat after the battle was lost. He escaped his execution and then fled the country alongside Sigismund Dijkstra and Boreas Mun, fugitives for their own reasons.

Spies and Criminals
The Rats 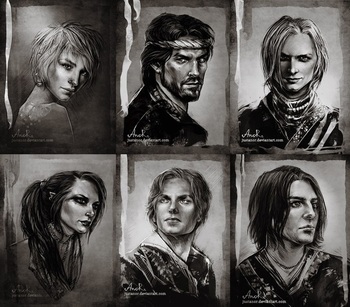 Appears in: The Time of Contempt | Baptism of Fire | Tower of the Swallow

A group of highwaymen that takes Ciri in, who, captured by local authorities after her jump through the portal at Tor Lara, found herself imprisoned together with one of them and helped with the escape. Separated from her friends and stranded in a foreign land, she finds company among them.

Appears in: The Time of Contempt

A legal adviser and detective of renown. At a price, he can find out any secret — or conversely, befuddle any investigation, remove incriminating evidence, or arrange for any person to disappear. Geralt hires him to perform research on Ciri's heritage and find out who is after her.

Appears in: Tower of the Swallow | Lady of the Lake

A tracker out of Fort Rocayne hired by Stefan Skellen to hunt for Ciri. Despite the company he finds himself in, he's not really that bad of a person.

A kingdom to the south of Nilfgaard that, outside of trade, rarely has much contact with the Northern Kingdoms of the continent. It is currently ruled by Maliq Nibras, who is seeking to establish new connections with other nations. 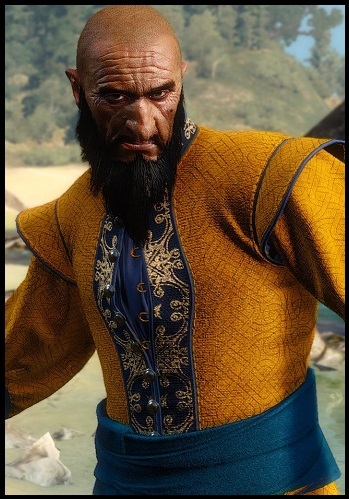 Appears in: Hearts of Stone
Voiced by: ???

The Most Gracious Crown Mage of the court of Malliq Nibras of Ofir. Aamad was sent by Nibras to Oxenfurt to find and cure his son of a terrible curse that turned him into a monstrous man-eating frog. He arrived just in time to see Geralt of Rivia slay the beast, and he captured the Witcher in order to bring him back to the King and face punishment for regicide. 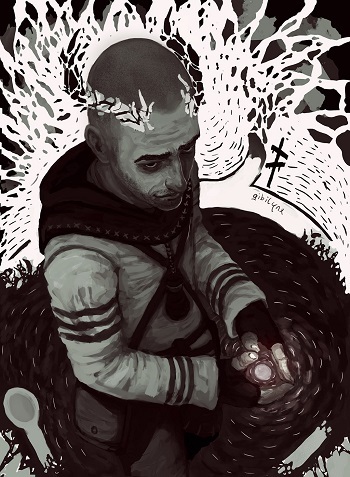 "Shani, darling... would you ask an eagle how it knows how to fly?"
Appears in: Wild Hunt
Voiced by: Alex Norton (English), Stanislav Strelkov (Russian)
"I'm no cheat. I give folk what they want, nothing more. That they oft desire unworthy things - that is entirely the fault of their own rotten natures."

A "traveling merchant", who offers his help to Geralt in exchange for the witcher doing a job for him. In reality, Gaunter is some kind of magical creature who comes to collect when the witcher crosses paths with Olgierd, and is the main ally NPC of the Hearts of Stone questline. 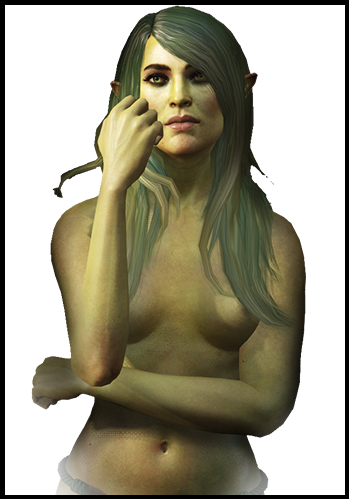 "Must I tell you my desire? Or can you divine it?"
Appears in: The Witcher | Wild Hunt
Voiced by: Anna Apostolakis (English), Elena Kischik (Russian)
"I am a goddess, you are the sword of destiny. Death has followed you for years."

An enchanting mystical Water Nymph or Vila, of such harmonious moral character and attunement to spiritual peace that she is revered as a Goddess of the land, of both water and earth surrounding the southern shore of Lake Vizima. Once, hosts of knights in shining armour defended her honour against other mystical forces in the world but now, only the Hermit and the Fisher King remain as the last of her loyal servants. Through her presence the fruit and fields are always in abundance, the people are content and happy and all around the year, summer reigns eternal.

The Ladies of the Wood

The Ladies of the Wood 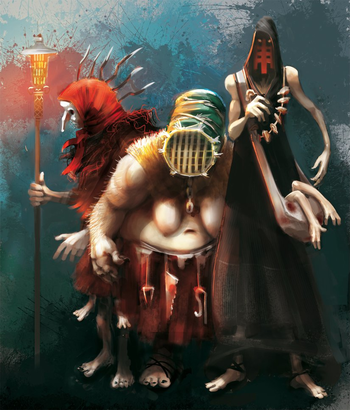 "A word once given we never break..."

Three sisters, Weavess, Brewess and Whispess, also known as the Crones, who reign over the southern marshlands of Velen unchecked and are worshipped as goddesses by the local populace. 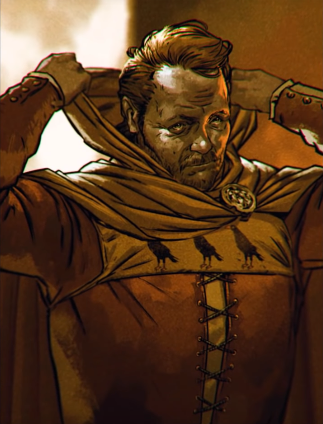 Appears in: Sword of Destiny, Thronebreaker: The Witcher Tales

A wandering, good-natured knight, accompanied by two female Zerrikanian bodyguards, who comes across Geralt while the witcher is on a contract to slay a basilisk. He and Geralt continue on to join the entourage of a king who is hunting a green dragon in the nearby mountains, for his own particular reasons. 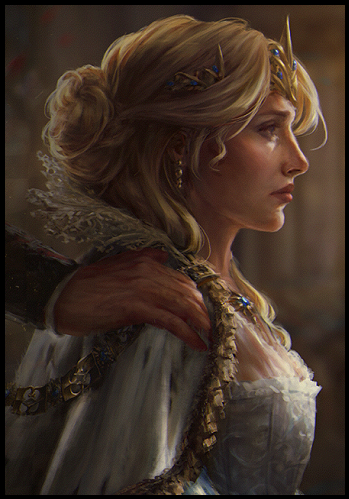 Appears in: The Time of Contempt (mentioned) | Lady of the Lake

False Ciri was a girl of roughly the same age and somewhat similar appearance as Ciri. Because of this, she was abducted and taken back to Nilfgaard. Though the emperor was obviously unhappy with not getting the real one, he nevertheless gradually warmed up to her and eventually took her as his wife.

Appears in: Blood of Elves | Lady of the Lake

Jarre is a sixteen years old monk and is studying to be a scribe at the Temple of Melitele in Ellander. He is one of the very few males at the temple, possibly the only one in residence. He is secretly in love with Ciri and has a crush on Triss Merigold. 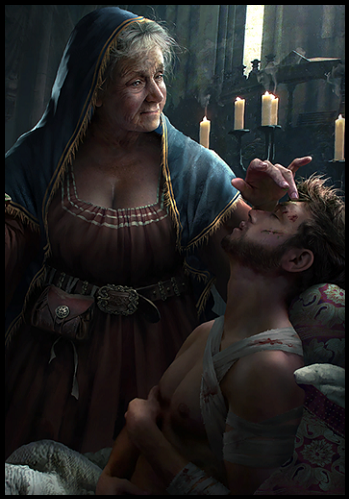 "Thank not me, thank Melitele."
Appears in: The Last Wish | Blood of Elves | Lady of the Lake

Nenneke is a priestess of Melitele, and the indisputable head of the Temple of Melitele in Ellander. She's known Geralt since he was young, treats Dandelion with fond contempt and has met Yennefer on several occasions.

Appears in: Lady of the Lake

A halfling doctor and surgeon who commands a field hospital during the Battle of Brenna.

Appears in: Lady of the Lake

Sir Galahad of Caer Benic met with Ciri, after she left Yennefer and Geralt on Malus Island, in a glen called Cwm Pwcca, at the foot of Y Wyddfa, mistaking her with the Lady of the Lake. He says he is son of Sir Lancelot du Lac and Elaine daughter of King Pelles lord of Caer Benic, a knight of King Arthur's Round Table. At the end of the Lady of the Lake novel he leads Ciri to Camelot at the court of King Arthur.