Characters / The Witcher - Geralt's Other Friends, Lovers, and Allies

Geralt's Other Friends, Lovers, and Allies

In addition to Yennefer, Ciri, Dandelion, and his Hanse, Geralt has met several other people along his path who have become frequent companions and friends, and sometimes lovers, to the witcher. 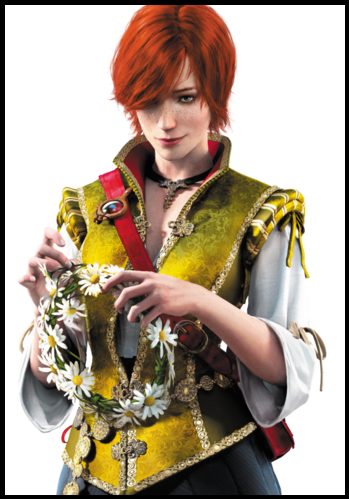 Appears in: Blood of Elves | Lady of the Lake | The Witcher | Wild Hunt
Voiced by: Jennifer Woodward (The Witcher) and Susannah Fielding (Wild Hunt, Hearts of Stone)

Shani is a beautiful red-haired medic, and a student at the Academy of Oxenfurt. While still a student, she, Dandelion and Philippa Eilhart helped Geralt chase down Rience. She participated in the Battle of Brenna as part of the staff of Milo "Rusty" Vanderbeck's field hospital. A friend of Dandelion and Geralt. Many years after the Witcher saga, she became the Dean of the Faculty of Medicine and Herbology of the University of Oxenfurt.

She died in 1340, seventy-two years after the Battle of Brenna. 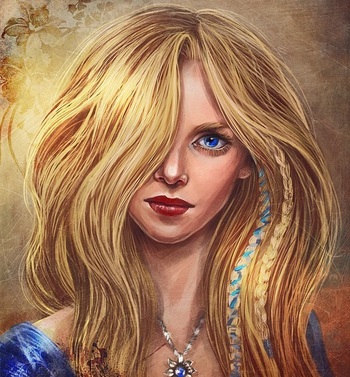 Appears in: A Little Sacrifice

Also known as "Little Eye", for her beautiful and half-hidden eyes. A bard and friend of Dandelion's who becomes romantically involved with Geralt during one of his "breaks" with Yennefer. She eventually dies of disease in Vizima. 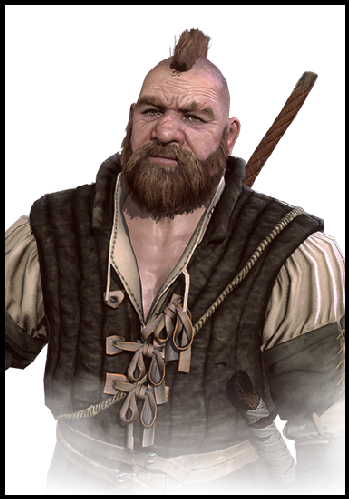 An entrepreneur, a soldier of fortune, a veteran of the Battle of Brenna, an unassailable optimist, a committed altruist, a lover of rough drinks and rougher songs, a master Gwent player and, above all, a dear and loyal friend to both Geralt and Dandelion. They first became fast friends years ago, when the pair ran into Zoltan and the band he was leading at the time across war-stricken Riverdell. It is from Zoltan that Geralt got his iconic Mahakaman sword — Sihil. He was also known mostly in the books for his talking parrot, Field Marshal Duda, which he sold to the gnome Percival Schuttenbach when he started a jeweler's workshop in Novigrad. After the Battle of Brenna, Zoltan got engaged to Eudora Breckenriggs and had to try to appease his rather unpleasant new in-laws. 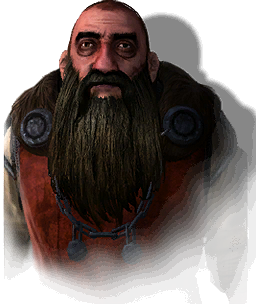 "The world belongs to whoever's best at crackin' skulls and impregnatin' lasses."
Appears in: Sword of Destiny | Blood of Elves | Lady of the Lake | Assassins of Kings
"Ever hear o' the dragon Ocvist? From Quartz Mountain? Well, Yarpen Zigrin and his band o' dwarves did 'im in."

An associate and drinking buddy of Geralt's, a dragon-hunter and a veteran of the Battle of Brenna. In the novels, Geralt first met him and four of his men escorting a convoy for King Henselt on the trail. Geralt, Ciri and a very poorly Triss were travelling towards Ellander from Kaer Morhen when they caught up to the convoy. He was in charge of a band of dwarves, originally six men, but now five, since Lucas Corto settled down and got married. In the short story "Granica możliwości" (The Bounds of Reason) Geralt meets the band outside Barefield just after they'd apparently slain a dragon called Ocvist and engage in a new hunt for a famed Golden Dragon sighted in the area. 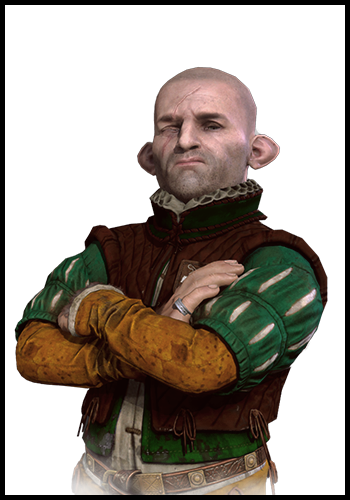 A doppler with an uncanny sense for business who makes his home (and fortune) in Novigrad. He befriends Geralt and Dandelion and assists them whenever they are in the city. He also befriends Priscilla and the Foxen mummers troupe. 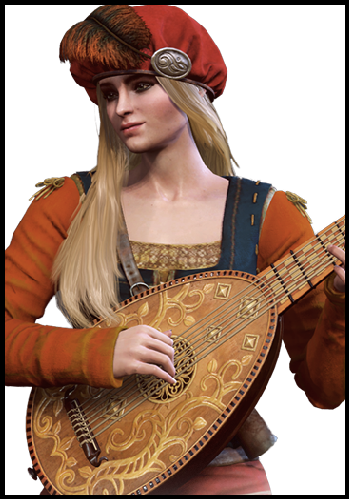 A bard who is working in Novigrad and a lover of Dandelion. 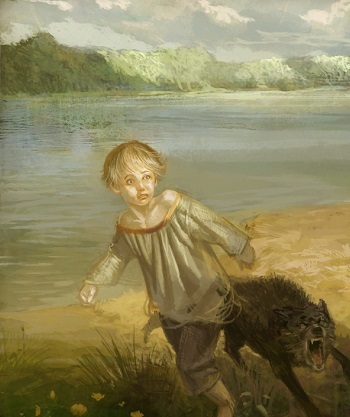 "We play 'Kill the Elf'! I'm always the Grand Master!"
Appears in: The Witcher
Voiced by: Teresa Gallagher
"The villagers sometimes whisper behind my back. One even called me the Devil's child..."

A pre-pubescent boy whom Geralt rescues from Barghests in the outskirts of Vizima. By all appearances, he’s a perfectly normal child, but he is also a Source, and has great potential for magic and especially a thing for seeing into the future. 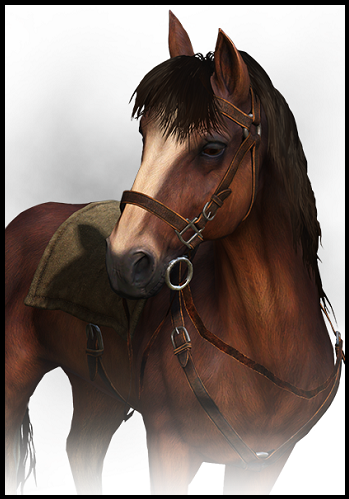 Geralt's horse(s). Geralt has taken a habit of naming all the horses he's ever had Roachnote A closer translation would be Roachy. The original name for the horse in Polish is "Płotka", a diminutive form of the word "Płoć" (meaning "roach"). Diminutives are endearing in Polish., after the European fish

. Geralt notes that he has a preferences for mares over stallions. Roach is Geralt's primary means of transport in The Witcher III, and there she takes the appearance of a chestnut mare. After completing a certain quest, Geralt can obtain a Nilfgaardian black stallion as his mount, replacing the previous Roach.

In Blood and Wine, while under the effect of a certain (mushroom-based) potion, Geralt gains the temporary ability to talk to Roach and understand her. Or maybe he's hallucinating the whole thing.

Except for appearances, the game treats both versions of Roach identically, thus tropes apply to both of them without distinction.