Skellige
While technically a Northern Kingdom, the archipelago of Skellige is culturally distinct from the mainland kingdoms. Seven clans led by Jarls rule the islands and elect a king from their ranks to rule over the isles. Warriors from the clans frequently raid the mainland for treasure and captives, while occasionally raiding other clans territory as well.
open/close all folders 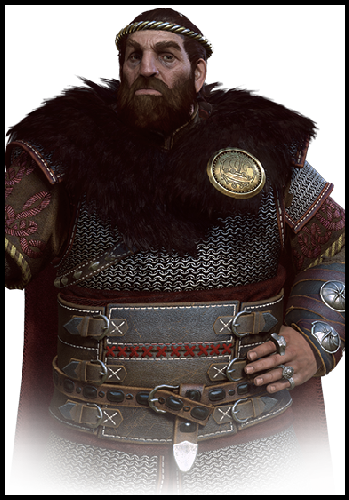 Appears in: The Last Wish | Blood of Elves | Tower of the Swallow | Wild Hunt
Voiced by:

Leader of Clan an Craite and ruler of the northern half of Ard Skellig. He is an old friend of both Geralt and Yennifer and served as a guardian of Ciri during her younger years. 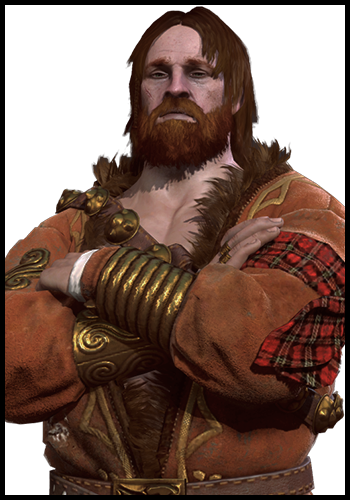 Appears in: Tower of the Swallow | Wild Hunt
Voiced by: Allen Leech

The son of Crach an Craite and one of the candidates for the throne of Skellige. Hot-headed, hot-blooded and always eager for glory, he nonetheless is noble and honorable. His feat to claim the crown is to slay the Ice Giant of Undvik, leading an expedition that was cut down until he and two friends were left. With Geralt's help, he slays the giant. When the Massacre of Kaer Trolde occurs, he doesn't hesitate to find the culprits right away. His actions can eventually make him king, where he continues raids against Nilfgaard. 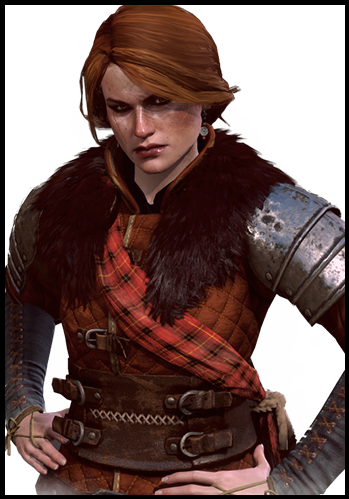 Cerys an Craite is the daughter of Crach an Craite, the Jarl of Kaer Trolde in Skellige. She is a tough but diplomatic individual who, atypically for the islanders, prefers to talk her way out of trouble instead of fighting. 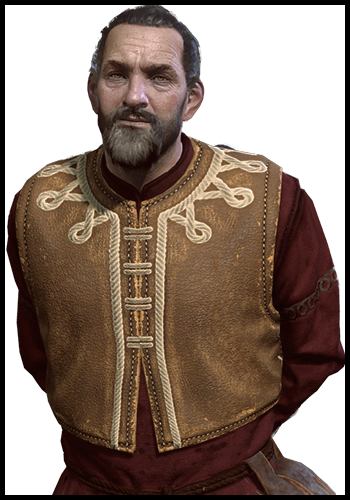 Appears in: Wild Hunt
Voiced by:
"We have adage here in Skellige... at a feast, mead and blood flow in equal measure."

The seneschal of Kaer Trolde. 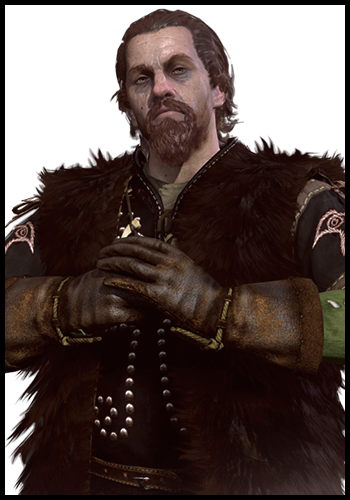 Jarl of Clan Brokvar and ruler of the island of Spikeroog. Though a fearsome warrior and beloved by his people, Udalryk is mistrusted by the other islanders due to a mysterious infliction which he claims is the gods speaking to him. 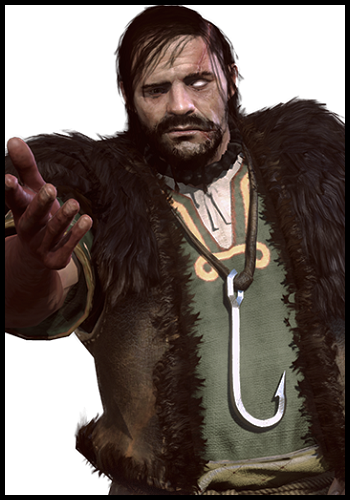 Appears in: Wild Hunt
Voiced by:
"But use it to build a longship, and you'll eat your fill of what others've grown and bred. After you've taken their wenches and their gold, burned their homes to the ground. That's how Clan Dimun lives."

Leader of Clan Dimun and ruler of Faroe, one of the poorest isles. Even by Skellige standards Holger is ruthless and brutal, as he raids other clan's lands as often as the mainland. 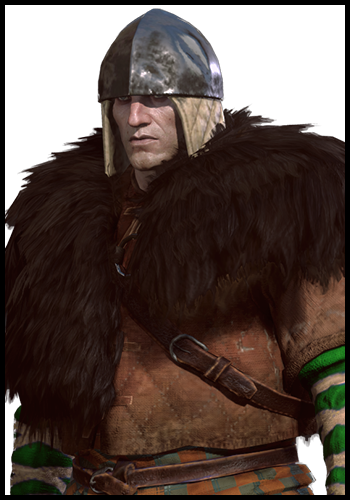 The nephew of Holger Blackhand. Although young, Halbjorn has already begun to make a name for himself as a fearsome raider and warrior. This fame allowed him to become one of the contenders for King of Skellige. 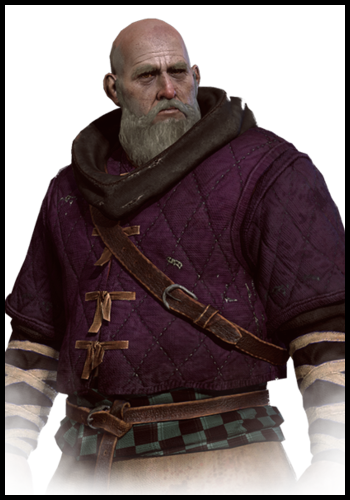 The Jarl of Clan Drummond. He rules the southern portion of And Skellig from his keep of Kaer Muire. 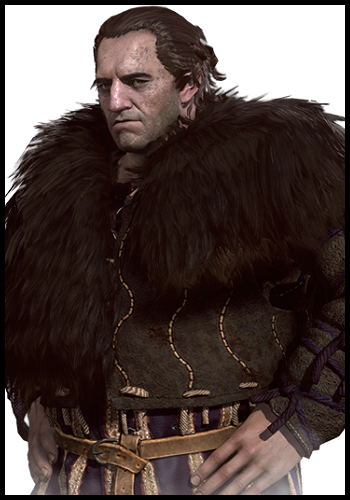 Madman Lugos' sole trueborn child. After the death of King Bran, Blueboy is one of several contenders for king. To prove his worth he sets out to brave the Cave of Dreams and face his deepest fears. 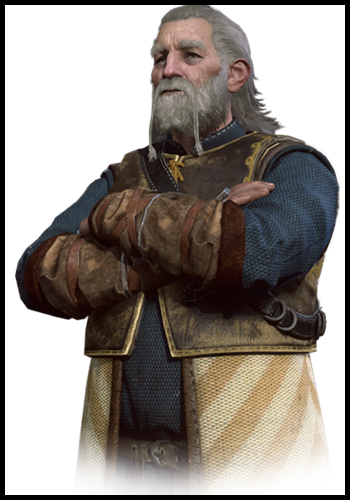 Appears in: Wild Hunt
Voiced by:
"I've lived my fill: steeped my hand in the blood of foes, felt the warmth of the southern sun and bite of the northern winds, the touch of women of the east and west. Now, I wish to die a death worthy of song."

Jarl of Clan Haymaey, Donar an Hindar is the eldest Jarl in the Skellige Isles. 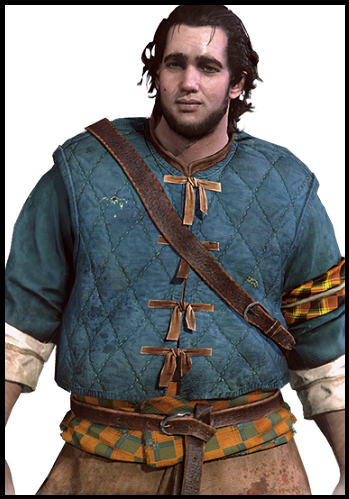 A young warrior who lives in the village of Lofoten on Hindarsfjall with his mother and sister. He rescues Ciri from the sea after she accidently teleports herself just off the shore of Hindarsfjall. 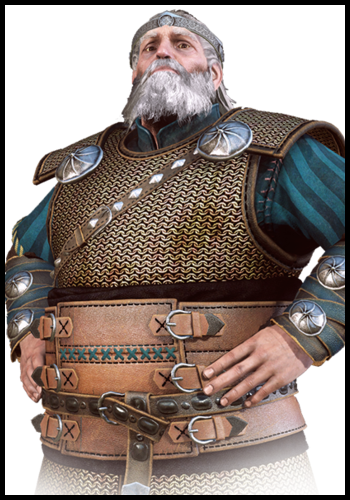 The elderly ruler of Skellige. He is the uncle of Crach an Craite. 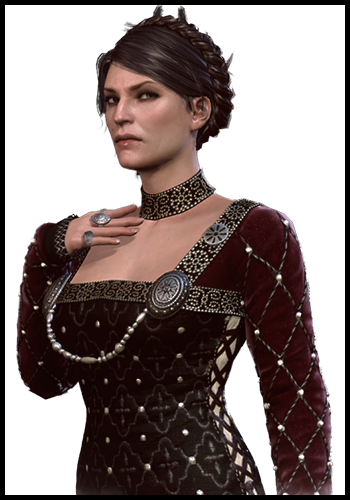 Appears in: Wild Hunt
Voiced by:
"Bran's son will not haggle for a crown that is his by right."

Wife of King Bran and self-styled Queen Mother of Skellige. She supports her son in becoming the next king of Skellige in order to establish a dynastic tradition. 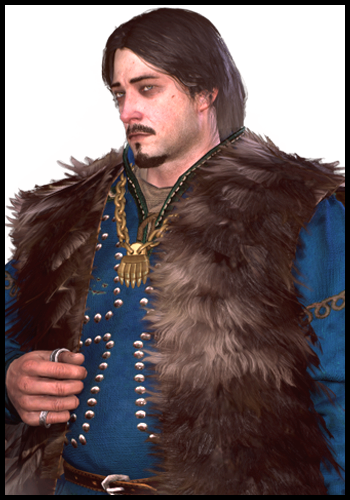 The son of King Bran and Birna, he succeeds his father as Jarl of Clan an Tuirseach and is one of the candidates seeking to replace his father as king. 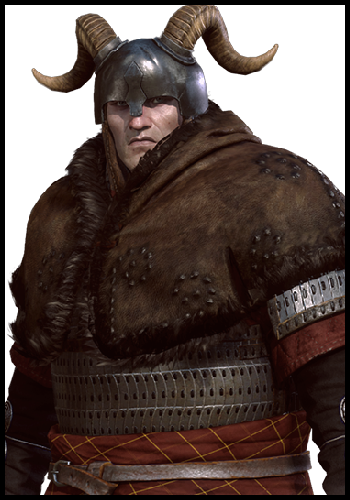 A boatwright and warrior of Clan Tordarroch known for his utter fearlessness, which disturbs even other Skellige warriors. 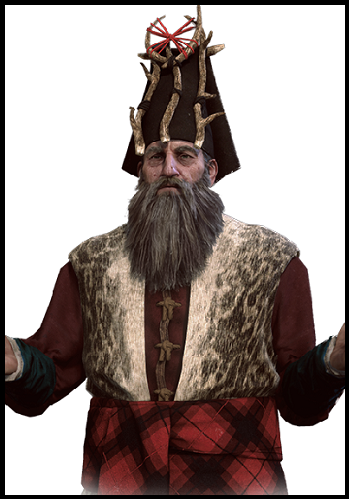 The Hierophant of the druids of Skellige, old friend of Geralt and guardian of Ciri's.

Appears in: Wild Hunt
Voiced By:

A druid in service to Clan Brokvar, and Jarl Udalryk's closest advisor. His wisdom proves most useful to Geralt

"If you think I'll simply betray to you what I learned through years of sacrifice and toil... then you are mistaken. Deeply."

A cranky hermit druid who also happens to be a master alchemist that is sought out by Geralt in the hopes of learning a bit of his alchemy knowledge. Gremist reluctantly agrees to teach him, but only on the condition that Geralt assists him in completing a few tasks first.