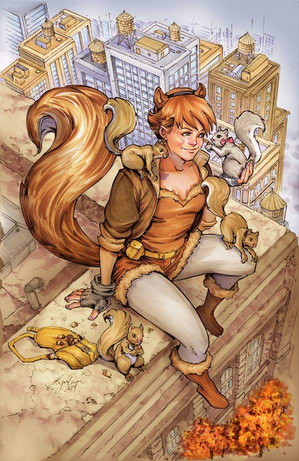 "Maybe it's just me, but I'm not crazy about super hero stories where everything's all dark and moody. Personally, I like the ones where good guys fight giant apes on the moon and stuff. Remember those? I do. That was back when comic book worlds were places you wanted to escape to... not from."

The girl/squirrel herself, who gained tree-rodent-based superpowers (proportional strength of a squirrel, razor-sharp nails, the innate ability to speak squirrelese, and, of course, the bushy tail) after her mother ended up going through squirrel-and-nut-themed versions of just about every Disposable Superhero Maker imaginable while pregnant with her. Doreen would go on to attempt a crime-fighting career in her mid-teens, with some... moderate success, most famously defeating Doctor Doom during her first appearance. She's drifted through many gigs over her career: member of the Great Lakes Avengers, nanny to Danielle Cage, before deciding to enroll in Empire State University's Computer Science program...

Despite the silly name, Squirrel Girl is one of the most canonically powerful superheroes in the entire Marvel Universe. According to her official Marvel powergrid, all of Doreen's stats are through the roof, putting her at the same level as the Living Tribunal. Stats aside, her powers include enhanced strength, speed, reflexes, agility, and leaping ability "proportionate to that of a squirrel". She has also small, sharp claws rather than fingernails and retractable knuckle spikes—both principally used for climbing. She can speak with squirrels, who tend to do her bidding because of how well she treats them. Oh, and she has a semi-prehensile squirrel tail and her lips taste like hazelnuts.

Thanks in part to her surge in popularity as a Memetic Badass, Squirrel Girl has also started to appear in other media: She has a supporting role in the cartoon Ultimate Spider-Man (2012), and she has made several appearances in Marvel-licensed games, often as a playable character. She came extremely close to joining the Marvel Cinematic Universe as the leader of the New Warriors, (which would be loosely based on "The Great Lake Avengers") note despite her never having been part of that team in the comics played by Milana Vayntrub, though the series was indefinitely postponed and ultimately cancelled.

Squirrel Girl has appeared in the following works: 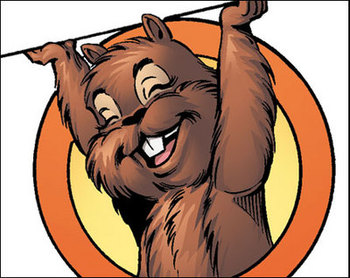 Monkey Joe was the constant companion, sidekick, and best friend of Squirrel Girl, who made the GLA accept him as member. 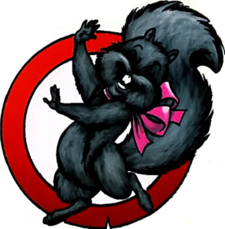 Squirrel Girl's pet sidekick who took the mantle from the deceased Monkey Joe. Doreen’s best squirrel friend, who usually spreads the word to other squirrels about Doreen’s requests. Wears a distinctive pink bow around her neck. 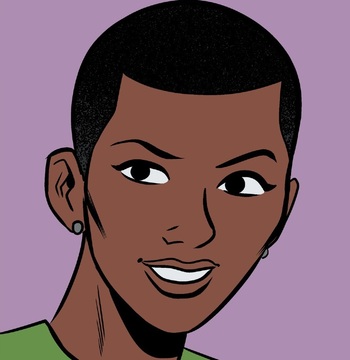 Doreen’s roommate and best human friend, who is in the same Computer Science program as she is. Her cat, Mew, is very important to her. Due to a lie told by Squirrel Girl, Tony Stark’s database has her recorded as “Nautical Nancy” with the ability to talk to boats. 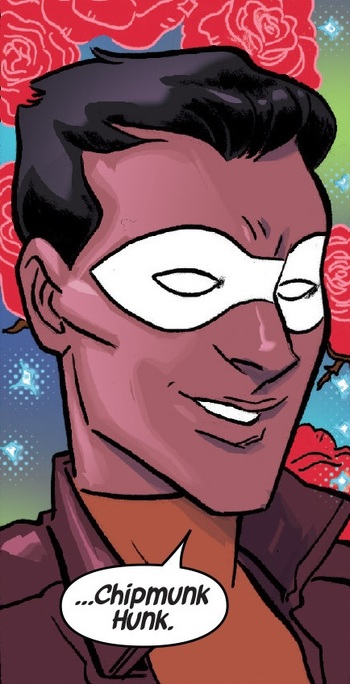 Tomas Lara-Perez is another student in Empire State University’s Computer Science program. Has the same abilities as Doreen, except with chipmunks. 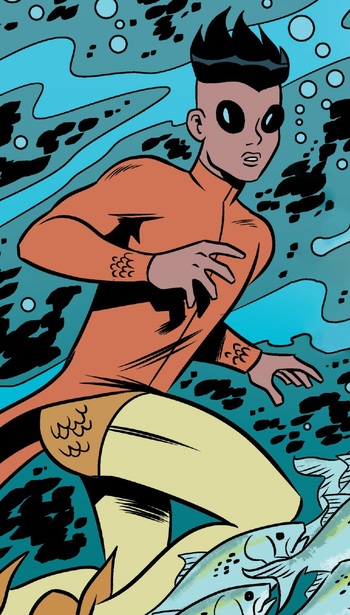 Ken Shiga is another student in Empire State University’s Computer Science program. Can actually communicate with any marine life, but “marine life” doesn’t rhyme with “boi”. Also has a variety of other Koi related powers, most of which are largely useless. 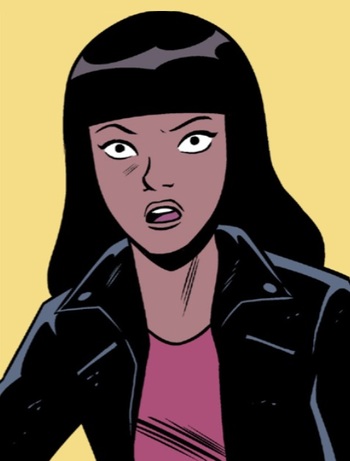 An incredibly intelligent student at ESU, also a computer science student. Fascinated with various super-villain-like devices. Dating Tomas Lara-Perez as of the end of the series. Typing her name into google auto-completes to “Mary Mahayan Doomsday Scorpion Tank”. 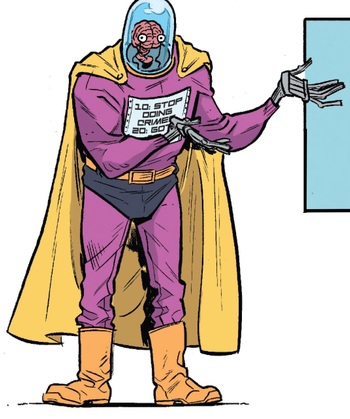 A nihilist robot man and computer sciences student who was once a member of Hydra and is now a hero. 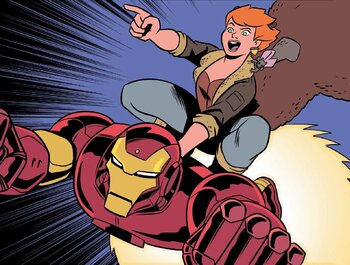 Became an ally of Squirrel Girl after their first meeting, in which Doreen defeated Dr Doom single-handedly. 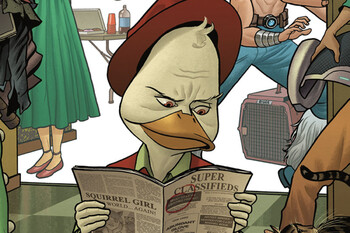 Villains (who often end up as more friends and allies) 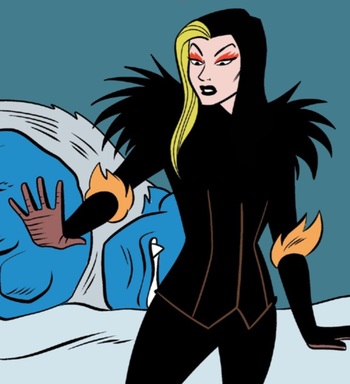 A giant squirrel from Norse myth who used to travel across Yggdrasil the World Tree as a messenger. However, she found her job boring and decided to leave her job and have some fun messing around on Earth. 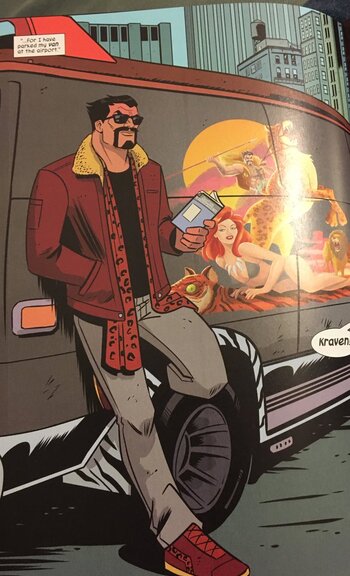 Doreen helped Kraven find new purpose in his life after his disillusionment as a result of his unending battle with Spider-Man. 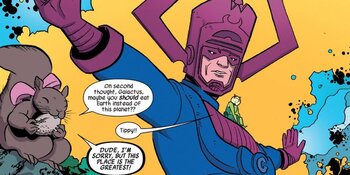 The Devourer of Worlds, and Doreen’s close personal friend. Has a standing invitation to Doreen to become his new herald. 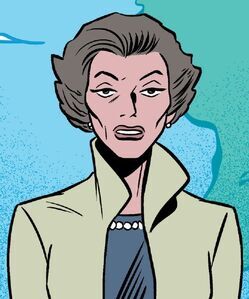