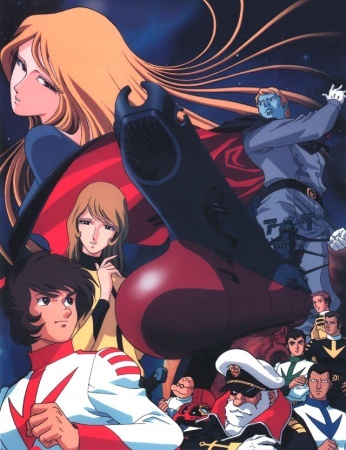 No, the Yamato is NOT about to shoot you. That's what the big muzzle in the bow is for.
Farewell, Earth,
the ship that is departing is
The Space Battleship... YAAA-MAAA-TOOO!
— Uchuu Senkan Yamato theme, translated
We’re off to outer space
We’re leaving Mother Earth
To save the human race...our STAR BLAZERS!
— Star Blazers theme
Advertisement:

The original series was followed by two more seasons and several movies with new villains and malleable continuity.

After decades of dispute, the Yamato franchise has been resurrected in a big way. A new film titled pace Battleship Yamato: Resurrection, was finally made and released to Japanese theaters on December 12, 2009. It takes place in 2220, 17 years after the events of Final Yamato.

This was followed a few years later with Space Battleship Yamato 2202, which re-adapts the Comet Empire arc. Like 2199, it first aired in theaters before being broadcasted on TV as a 26-episode series from October 2018 to March 2019.