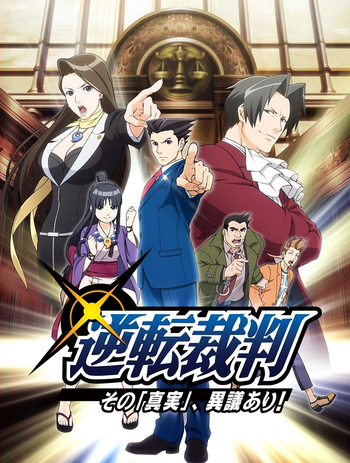 The loud cry for justice.
Advertisement:

Fifteen years after the first game's debut, an animated adaption of Ace Attorney—known as Gyakuten Saiban: Sono Shinjitsu, Igiari! (lit. "Turnabout Trial: I Object to Your Truth!") in Japan—was finally made.

The first season of the anime is based on the first two games of the series and first aired in Japan on April 2, 2016 as part of the Spring 2016 Anime season. The anime was produced by A-1 Pictures, directed by Ayumu Watanabe, and with music by Kaoru Wada. For those outside Japan, Crunchyroll officially streams and subs near-simulcasts episodes of the series, with two alternative subtitle options for the characters' original Japanese names and the Americanized names from the original games. Funimation also provides the show's English voice track, with Dub Name Change in full effect.

A second season, based on the third game in the series, debuted on October 6th, 2018, with Crunchyroll returning to simulcast, and Funimation providing a simuldub a few weeks later.

Warning: This Anime contains unmarked spoilers ahead for the first three games of the series: You have been warned.