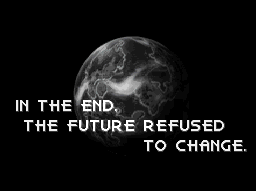 And you're still hungry.
"It is written."
— Tamil Proverb
Advertisement:

A character gains knowledge of an event that is about to happen whether by prophecy or time travel and they attempt to change it, but it comes true anyway. (Often it happens because of those attempts). It's as old as Oedipus Rex, used by Shakespeare and Tolkien, and still fresh at least as recently as the mid-80s sitcom!

This trope will usually turn out one of three ways:

Note that this is the exact inverse of the common Western portrayal of fate as an outside force of some sort, acting to "guide" outcomes in real time as they progress — both of these opposite notions fall under the concept of "You Can't Fight Fate".

If the prophecy comes true because of being made (in the most common scenario, because of everyone's attempts to prevent it), it's a case of a Self-Fulfilling Prophecy. If the universe appears to self-correct any attempt at change, then Ontological Inertia is in play. In any case, on the Sliding Scale of Free Will vs. Fate, stories where You Can't Fight Fate register as Type 1 on the scale.

Since it's Older Than Dirt, most examples rely on a Prophecy Twist. If time travel is involved, You Already Changed the Past. See also Stable Time Loop and Prescience Is Predictable.

The Fatalist is characterized by their strong belief in fate.

Compare with Because Destiny Says So, But Thou Must!, Prophecies Are Always Right and In Spite of a Nail. Contrast with Screw Destiny and Immune to Fate (who treats this trope like a funny joke). A way to get around it can be Tricked Out Time.

Alternative Title(s): You Can Not Fight Fate