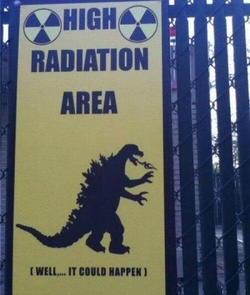 A sub-trope of I Love Nuclear Power, Nuclear Nasty is a monster (usually the Monster of the Week) created when a creature is exposed to radiation. Very common in 1950s monster movies, as well as works trying to be throwbacks to that era for obvious reasons. Tends to be an Attack of the 50-Foot Whatever. These creatures are often common sights in a Standard Post-Apocalyptic Setting.

When played straight, this is a case of Artistic License – Biology. This becomes slightly more plausible if an organism is irradiated and its offspring are born as mutants, rather than some weird transformation happening to the irradiated organism itself. See also Toxic Waste Can Do Anything, Radiation-Immune Mutants, a Required Secondary Power for some of these nasties. However, in most cases, high exposure to nuclear radiation usually results in death of most animals and humans (which makes post-apocalyptic nuclear war scenarios of fighting mutated creatures highly unrealistic). That being said, there have been several species that are able to adapt to nuclear radiation, as evident with Chernobyl where, although radiation levels are still lethal for most humans without adequate protection, several animals manage to survive with minimum or no mutations. In fact, the only major mutations they suffered were adaptations to protect them against the ill effects of radiation, such as higher levels of antioxidants and better DNA repair mechanisms. They even live longer because of it.