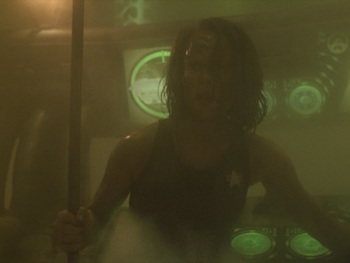 Lotta smoke, dirt and grime in this one!
After destroying the Doctor's camera in a fit of (undoubtedly justified) annoyance, B'Elanna is assigned to work on her emotional control with Tuvok. Her lessons are interrupted when she's called upon to help repair a Malon toxic-waste freighter that is in danger of exploding, destroying everything within three light years. But a hostile creature on the freighter is stalking the Away Team.