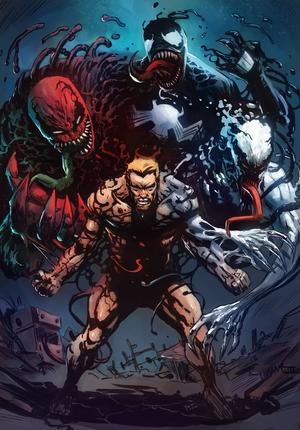 "It's not about control, or following orders like a soldier. It's about us. We. We are Venom!"

Eddie Brock was raised a devout Catholic by his cold and distant father, who blamed Eddie for his wife's death during childbirth, resulting in a distance between the two that instilled in Eddie a need to impress his father. As an adult, Eddie marries Anne Weying, a lawyer, and becomes a successful journalist for the Daily Globe in New York. Eddie's luck changes for the worst when he is contacted by a a man claiming to be the serial killer called the Sin-Eater. Eddie's interviews with the Sin-Eater initially bring him great success until the police force him to out his source, Emil Gregg. Unbeknownst to Eddie, the very next day Spider-Man seemingly debunks Brock's article by capturing a copy cat going by the name Stan Carter. Brock is subsequently fired from the Daily Globe, divorced by his wife, and disowned by his father. Reputation destroyed, he is only able to find employment as a two-bit writer for a disreputable tabloid. Blaming Spider-Man for his troubles, he begins to work out obsessively in an attempt to assuage his rage, but eventually Eddie cannot take it anymore and goes to the Our Lady of Saints church to pray for forgiveness for the suicide he is contemplating — unaware that Spider-Man had used the bells in the selfsame church to drive away his symbiotic Black Suit. The symbiote, lying in wait for an appropriate host, is drawn to Brock's mutual obsession with Spider-Man and bonds with him. In the process, Brock learns Spider-Man's true identity, and Brock's overwhelming hatred for Spider-Man turns the already bitter symbiote's love into a twisted obsession.

Calling himself Venom, Eddie becomes one of Spider-Man's most formidable foes: stronger, faster, and immune to his Spider-Sense. Eddie wages a campaign of torment against Peter Parker, invading his private life and threatening his loved ones, yet still exhibiting moments of compassion. After Eddie's defeat by Spider-Man, the symbiote would break him out of prison, and the two, thinking they had killed Spider-Man on a secluded island, would retire. They were brought back into Spider-Man's life when it was revealed that the symbiote had spawned another symbiote during Eddie's breakout, which bonded to his then-cellmate, Cletus Kasady, who became the supervillain Carnage. Working with Spider-Man, the two defeated Carnage and after helping Venom save his ex-wife in a later confrontation they would come to an uneasy alliance — they would stay out of each other's way. Eddie would go on to act as a protector of innocents and even a government agent.

Eventually becoming disillusioned with the symbiote after it absorbed its evil clone and became abusive, Eddie sold it to the highest bidder. However, this would do little but feed his guilt and he would attempt suicide on numerous occasions. After being found by Martin Li praying in a church, Martin hired Matt Murdock to acquit Eddie for his crimes and gave Eddie a job at his soup kitchen, where Eddie would find some peace. This is where Martin Li's mystical powers cured him of his cancer and created the Anti-Venom symbiote by fusing Eddie's white blood cells with the remnants of the Venom symbiote and the Light Force. Unlike his original stint as a anti-hero, Anti-Venom would make a attempt at full heroism and came into conflict with Norman's Thunderbolts, including the then-current Venom Scorpion, and Mr. Negative before sacrificing his Anti-Venom powers to save civilians from the machinations of the Jackal.

He would then set out to slay the remaining symbiotes. After killing some of the Venom symbiote's spawn, he would be forcibly bonded to Carnage's spawn, the Toxin symbiote, in order to combat the fourth Venom, Flash Thompson. Now going by Toxin, Eddie would go on to menace Flash in the same way he menaced Peter Parker, even coming to a similar truce, allowing Flash to use the symbiote for good... threatening him with death if he did anything else. This got the attention of the FBI, who recruited him onto an anti-symbiote task force to fight a now Darkhold empowered Carnage, Eddie sacrificing the Toxin symbiote in the process.

After the Venom symbiote was bonded to Lee Price, Eddie would leave the anti-symbiote task force to rescue and rebond to it. He would return to the Venom name and continue his "Lethal Protector" role.