Code Vein Main Character Index
Revenants | The Lost | Successors
This page details the various types of Lost, formerly Revenants who succumbed to their bloodthirst and transformed into monsters. Beware of spoilers.
open/close all folders
In General 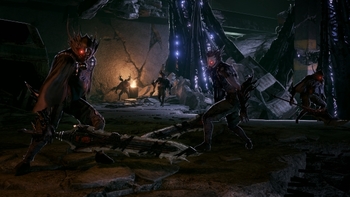 If a Revenant's blood supply runs low, they are unable to maintain their humanity and transform into a monster called a "Lost." In order to escape from the suffering of their never-ending thirst for blood, they forever wander the world in search of new blood. They are the main enemies in the game.

Lowly creatures who didn't amount to much as Revenants, and continue to reflect that as mindless zombies. The common areas of Vein are flooded with these things, and though they have all but degraded into simple beasts, they remain a hazard for anyone trying to walk the streets.
Grime Mass

Lost that whose bodies have dissolved into acidic sludge. They come in two flavors: purple sludge and sand.
Dark Vampire Wolf

Dogs that have mutated and joined the ranks of the lost. Unsurprisingly, they like to hunt in packs.

Bizarre creatures occasionally found roaming the more extreme conditions within Vein's topography. Their presence can be foretold by the crackling of their spines and their heavy, labored breathing.

Paramilitary revenants who have fallen to the Queen's corruption. Though they've become puppets like any other Lost, they retain enough discipline to show off a wider variety of combat skills.

Giant Lost that are found starting from the Dried Trenches. They look like giant oni, with the main difference between them being the demons are red and the devils are blue. The red ones can use heavy melee weapons while the blue ones use one handed swords and bayonet rifles to snipe at you.

Former men who have have all but atrophied into mere stumps with deformed skulls. They are essentially glorified turrets for the Lost, firing away at anyone who enters their line of sight.
Bog Predator / Thirst Plunderer / Thirst Slaughterer

Large, insect-like lost that can wield weapons and sometimes use lightning attacks. Bog Predators are found in the Howling Pit, and the Thirst Plunderer/Slaughterer are found in the Crown of Sand.

The Ridge of Frozen Souls is populated by Lost that have grown fur underneath carapace armor. They're quite numerous where they're found, and sooner or later you will be forced to bypass attack after attack as you make your way to the Ridge's core.

The City of the Falling Flame has been burning for so long, many Lost become scorched, perpetually red-hot monsters that have nevertheless adapted to their extreme environment.

The term "Greater Lost" is a catch-all designation for any frenzied monster dangerous enough to strike fear into even the undying. The average Revenant runs at the mere sight of one lurking about, and even veterans hesitate at the prospect of engaging them in battle; if a Greater Lost doesn't have a collection of powerful Gifts up its sleeve, it is boasting raw strength that can cleave careless challengers with a single swipe.

Pale creatures that only barely resemble the humans they once were. This particular type of Lost have forgone almost all their clothing as they increased in stature, and can be found slurping off corpses in the vain hope that sustenance can be found.
Stonecrusher

Portly giants that can be considered the male counterpart to the Raging Noblewomen that also fill the Lost's elite ranks. The first one you meet was once Oliver Collins, now just another hulking monster like many before him.
Raging Noblewoman

Formerly female revenants, bloodthirst transformed these Lost into hulking, bloated caricatures of their past selves ready to crush anything foolish enough to stand in their way.

Weird, tentacled lost found in the Howling Pit and Crown of Sand that wouldn't look out of place in the Cthulhu Mythos.

Colossal yeti-like lost in Ridge of Frozen Souls. They're incredibly tough to the point that when you first meet them, it's best to just run away or past them.

Experienced warriors of the Security Enforcement Unit Cerberus, working as soldiers under the provisional government. Many of them were veterans of Operation Queenslayer and are thus deeply loyal to Silva, but even they aren't immune from being corrupted into Lost.

More widespread version of the Gilded Hunter. They don't have his super buff, but are otherwise just as elegant and deadly as their gilded counterpart. 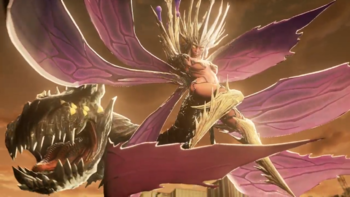 A powerful Lost that has made its nest in the Ruined City Centre. During a dispute between the protagonists and a revenant over the fate of a human woman, this creature wakes up and attacks. 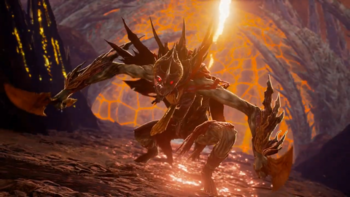 A monstrous Lost lurking at the bottom of the Dried-Up Trenches. It blocks the path to a bloodspring. 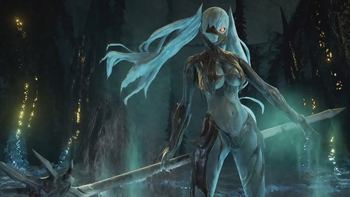 A powerful humanoid Lost that resides in Howling Pit. It suddenly shows up without warning and attack the party when they ran into Mia again.

A transformed Provisional Government Knight residing in the Cathedral of Sacred Blood. As his name suggests, he will crush any ill-prepared foe who provokes him with all his might. 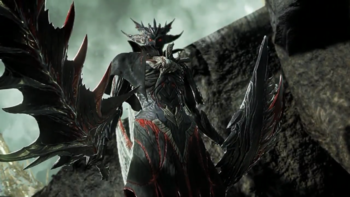 A powerful humanoid Lost that wields a giant, spear-like sword in its right hand, a shield in its left hand, and two wing-like huge blades on its back.

A humanoid Lost in a gilded suit of armor that wields an elegant halberd with exceptional grace. 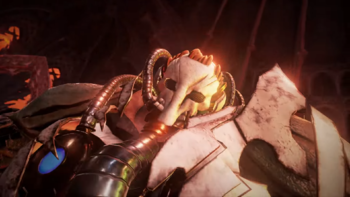 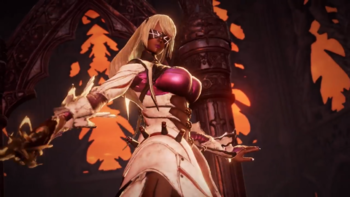 A pair of powerful Lost created by Juzo Mido. They are activated and pitted against the the party when they confront Mido at the Crypt Spire.

Having revived sometime following its first defeat at the hands of the protagonist and Jack, the Queen's Knight managed to revive and now stands guard before the Government Building, as if defending it from any intruders. Defeating it grants players the Ishtar Vestige, originally owned by Cruz Silva. 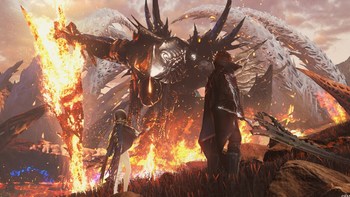