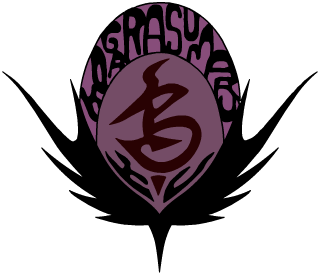 Kogarasumaru is a small Storm Rider team whose members are the main protagonists of this story. They begin with a single motivation: a desire to rise to the top, crush whoever is already there, and take their place. However, as they become more and more involved in the world of A-Ts, they realize things will not be as cut-and-dried as they had thought.

They're all first-class badasses. Yes, even Onigiri. The team possesses three kings: Kazu, the Flame King, Agito, the Fang King, and Ikki, the Storm King.

Itsuki Minami is the male protagonist of the series. Prior to the beginning of the series, he was established as the leader of his school's gang, the East Side Gunz. There, he earned the nickname "Babyface", which has followed him into the A-T world. He has shown an extreme amount of talent with the Air Trek, to the point of being a genius at it. He is the founder of the team Kogarasumaru as well as its leader. He is the current Storm King of the Hurricane Road, a road of his own creation that is a fusion of the Wing and Over Roads.

Ikki is a boisterous, Hot-Blooded young man who acts like a prick but has a heart of solid gold. Despite coming across as a moron, he consistently shows himself to be a charismatic leader and a brutal fighter who, though he never takes things too far, fights with exceptional cunning and underhanded tactics. Ikki strongly believes in striving to achieve one's goals instead of taking shortcuts or letting somebody else give it to you, which brings him into direct conflict with the series' Big Bad, who wants to forcefully change the world for the (in his eyes) betterment of everybody.

"What makes some asshole born just a few years ago on a 'different level'? Don't give me that lip. I've been through shit you can't even imagine, kid."

The youngest and dominant persona, Agito was created by Akito to cope with the mental stress created by his pacifist nature and responsibilities as Fang King. As such, his strength is derived from his desire to protect Akito. He is aloof, foul-mouthed, and violent, but despite this, his great skill and surprising intelligence make him a valuable asset to Kogarasumaru. Eventually, he warms up to the rest of the team, and even gets involved in their antics from time to time.

Akito was the dominant personality prior to Agito's creation and his polar opposite in almost every aspect. He's timid, gentle and feminine both in behavior and appearance. Nonetheless he is even more frightening than Agito when angered.

Lind is the third personality that comes out when the other two are having trouble, and is far more powerful and violently proactive than Agito. He's ruthless, sadistic, disdainful, and has a playboy attitude towards women. He is in actual fact the first Brain Charger, and a copy of Gazelle, a Gravity Child and Kaito's lover who was killed by the Takeuchi brothers.

All of the personae are King-Level Bloody Road riders. 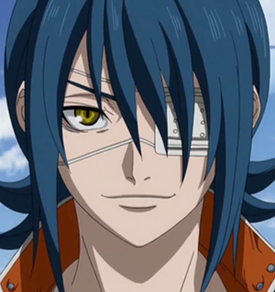 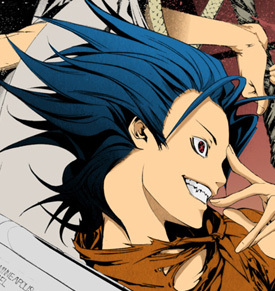 Kazu is the second in command of team Kogarasumaru and Ikki's best friend. By nature, he is insecure and timid, a trait that is only exasperated by the brash and overbearing personalities of some of his teammates. This introverted nature often leads others to underestimate him, especially when they compare him to the likes of Ikki and Agito. In reality, he is hard-working and dedicated, and a competent fighter and Storm Rider.

Kazu is a Speed-type rider who rides the Apollon Road, a refined form of the Flame Road incorporating Time Tricks, which calls on his speed and agility. 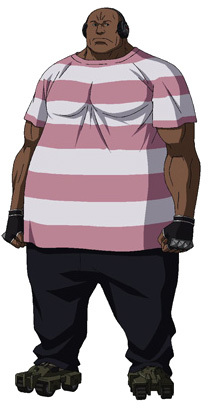 Mihotoke Issa, a.k.a. Fats Buccha, is a heavily-built, tanned fighter who specializes in close combat. His elements of character design, especially the three lines on his forehead, are based off the wrestler Abdullah the Butcher. Before joining Kogarasumaru, he was the leader of the team Night Kings (Yaou) and savagely beat down Kazu and Onigiri. After losing to Ikki in a Hurdles match, he becomes good friends with Ikki, Kazu, and Onigiri and becomes a founding member of Kogarasumaru. Big, intimidating, and surprisingly intelligent, Buccha has deep technical knowledge and analytical skills when it comes to A-Ts, but he suffers from a crippling lack of confidence.

Buccha rides his own unique road called the The Rock Road (not to be confused with the Gaia Road, which it is something of a derivative of) which emphasizes physical hand-to-hand attacks enhanced by his A-T's momentum. 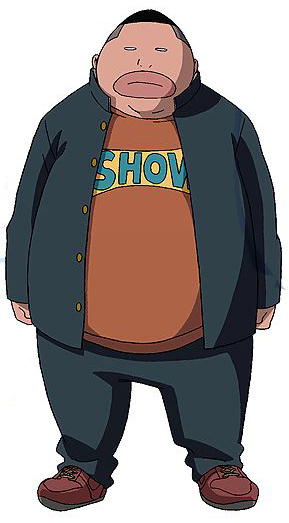 Onigiri is one of Ikki's childhood friends. He is 15 years old and a part of Kogarasumaru. His head looks like a riceball (Onigiri in Japanese, hence the name). Onigiri is a pervert whose imagination is so potent that he can as good as see through anything if there's an attractive girl behind it. He frequently uses his powers to peer through walls into women's bathing area and through their clothes and characterized as a pig.

Onigiri rides his very own road, the Smell Road. It utilizes Onigiri's body odor to distort an opponent's senses and create illusions. It is very disgusting.

Emily is part of the track team together with Yayoi Nakayama. She has short dark brown hair, sometimes depicted as black itself, along with dark brown eyes. Has a big crush on Kazu.

She eventually joins the team Kogarasumaru and acts as their back-up. Even though her Air Trek skills aren't that great, she seems to be able to summon up super strength and endurance, from taking hits from powerful Storm Riders and brushing them off easily to delivering extremely powerful kicks and wrestling moves, through her pure strength of will and "The Power of Love". Two thirds of the way through the series she gets mind swapped into John Omaha's body.

Yayoi was part of the track team with Emily and later becomes something like the team's manager. As such, she is Kogarasumaru's Team Mom and she looks after the rest of the team, especially when they get so focussed on training that they forget to eat or rest. She has a crush on Agito, who surprisingly has no problems with this. Oddly enough, she has the ability to communicate with Ikki's crow. She also has the ability to tell the exact time, down to a second — a trait that is shared by the more affluent tuners of Tool Toul To. Ine Makigami stated that she saw potential in Yayoi as a link-tuner, even mistaking Yayoi for the team's tuner.