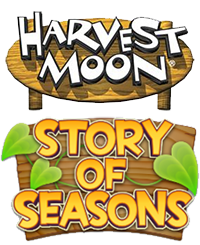 Story of Seasons, formerly Harvest Moon (known as 牧場物語, Bokujō Monogatari in Japan, lit. "Ranch Story") is a series of Simulation Games based on farming developed by Marvelous (formerly Pack-in-Video, then Victor Interactive Software, then Marvelous Entertainment, then Marvelous AQL, due to a long line of buyouts and mergers on the Japanese side) and translated by Natsume in North America and Rising Star Games in Europe. The original game was released for the Super Nintendo in 1996, and since then there have been over twenty Harvest Moon titles released for a variety of different consoles. The plot line, such as it is, is much the same for almost every game: the protagonist, a young hero, just starting life on his or her own, inherits or buys a farm. Sadly, its previous owner was unable to keep up with chores on the farm, leaving it in a significantly dilapidated state... and now it's up to you to fix it!

Gameplay is generally fairly simple. The player must clear his/her fields, plant crops, raise livestock like cows, sheep, and chickens, care for pets like horses and dogs, and gather materials from the countryside to help improve his/her house or sell for extra cash. However, the "business" aspects of play are not nearly the full scope of the game; the social aspect of the series is one of its biggest draws.

In addition to making money through a variety of means, the player is generally expected to integrate himself or herself into the community. Players can make friends with various townsfolk, attend festivals (which range from paralleling real-life holidays like Thanksgiving or Christmas, to pseudo-religious ceremonies, purely social occasions in the community, and competitions where the player can compete himself or herself or enter his/her livestock or pets to compete), woo the local girls (or guys in later versions where you can play as a female farmer), and eventually get married and have children.

There is a distinct flavor of the spiritual in the Story of Seasons games; the player can typically meet a variety of imps, sprites, spirits, fairies, and even the Harvest Goddess, most of which are friendly and will help you out if you give offerings or make an effort to befriend them. Though a game that revolves around doing farm chores might sound ridiculously boring, somehow they managed to make an entertaining, stylish, successful game franchise around the concept. Not to mention ridiculously addictive. Although the series has never achieved massive sales numbers, it enjoys an extremely loyal cult fanbase.

Some games have an Unexpected Gameplay Change or two; Rune Factory: A Fantasy Harvest Moon for the DS has a fantasy setting and some RPG-style elements, such as the ability to fight monsters (and with the releases of RF 2 (DS) and Frontier (Wii), has become a full-fledged Spin-Off Series), while in Innocent Life: A Futuristic Harvest Moon for the PSP, the player character is actually a Ridiculously Human Robot.

In the majority of the games, there is a certain time limit (usually between two and three years of game time) built in, at which point some event (such as the character's father visiting the farm) occurs and the player is "graded"- but it's almost always possible to continue playing indefinitely even after you've received your "grade".

As with most popular series, it has a wiki

In early 2014, Marvelous AQL dropped Natsume as publishing and localization company for Bokujou Monogatari in the West, switching instead to XSEED Games, their Western division who were already localizing Rune Factory. However, while Natsume still owns the rights to the Harvest Moon brand, many fans favour XSEED's localisation and translation style. Natsume has chosen to continue making games under the "Harvest Moon" label that contain a similar style of gameplay but are in themselves not Bokujou Monogatari games. How everything went down is explained in this interview

. The official continuation of the series is now being released under the title Story of Seasons, causing no small amount of confusion for fans and retailers alike.

Compare and contrast with Hometown Story, Little Dragons Café, and River King, the former two being by the creator of the franchise and the latter being Story of Seasons's sister series.

The games in the series (North American releases) include:

The Story of Seasons series provides examples of: