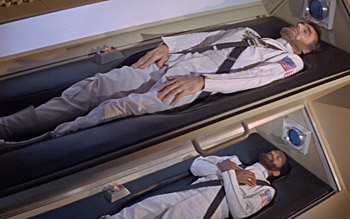 Space is big. Really big. You just won't believe how vastly, hugely, mind-bogglingly big it is. So big, in fact, that if Faster-Than-Light Travel (or close-to-lightspeed travel) is impossible it would take multiple human lifetimes to reach another star, and one way around this is you hibernate for most of the trip there. This is the Sleeper Starship.

A modern variation that is becoming popular is one where the passengers just upload their brains into the ship's computers and are downloaded into cloned bodies when they reach their destination. An older variant — a cross between a sleeper ship and a generation ship — is the "seed ship", which carries frozen embryos instead of frozen adults to save weight. The problems involved in rearing a generation of newborns without live parents are left as an exercise for the author.

Often overlaps with Colony Ship. Sleeper starships seem even more prone to Cryonics Failure than normal cryonics. Contrast Generation Ships, in which people spend their lives out of stasis and are replaced at the helm by their children. If they do arrive safely, they may find that they've fallen victim to the problem of Lightspeed Leapfrog.

In some works such a ship could be seen as Mental Space Travel.