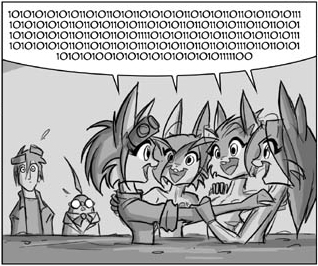 Don't bother translating. It's Squirrel Squeak.
Helios: We are Daedalus. We are Icarus. The barriers between us have fallen and we have become... our own shadows. We can be more if we join... with you.
JC Denton: And if I do? What becomes of me?
Helios: You will be who you will be. We are our choices. And we can choose to lead Humanity away from this... darkness.
JC Denton: This is what I was made for, isn't it? This is why I exist? (beat) All right, let's do this.
— Helios ending, Deus Ex
Advertisement:

Two or more characters willingly create a Psychic Link in order to do amazing things.

This trope can be pulled off many different ways. A common one has mystics and magicians use Super Empowering to give one among them their combined power. Telepaths may subsume themselves into a group entity for greater psychic power and reach. Technopaths can "plug in" directly to a greater AI or a group of other technopaths.

This comes in a few flavors: Usually, a single person is "elevated" and made first among equals. The other magicians, telepaths or what not give the first the full benefit of their individual powers and telepathic advice, etc. while they meditate and stay immobile. While in this weakened state, enemies can attack these powerful Mental Fusions by going after the supporters. An equally common variant has the "mob", where the group has no one mouthpiece, but moves with perfect synchronicity and jointly use their powers and combat skills in perfect teamwork to devastating effect. The downside to these is that they usually severely drain everyone once the spell is over.

Compare Assimilation Plot, where the goal of The Plan is to create this on a universal scale. Compare Hive Mind, which is when a usually involuntary and permanent version of this happens and all sense of self or individuality is lost. If one dies while in the link is in effect it's a Psychic Glimpse of Death. May coincide with Fusion Dance. See also Mind Link Mates and Twin Telepathy. Side effects may include creation of a Living Memory inside participants' minds, speaking in unison, Glowing Eyes, Battle Aura, Power Floats, and drowsiness.