The list of Tekken characters who were introduced in Tekken 2.

Origin: Japan
Fighting Style: Kazama-style Traditional Martial Arts
Appears in: 2, Tag, Tag 2, Revolution
Voiced by: Shiho Kikuchi (T2, Tag), Mamiko Noto (Tag 2), Yumi Touma (Tekken: The Motion Picture)
An Animal Protection Officer for a group known as W.C.C.C., as well as The Chosen One. Raised among nature on a family line with powerful spiritual powers, she's the only one who notices Kazuya being controlled by mystical forces. While officially entering the tournament to arrest him for smuggling endangered animals, she's secretly wishing to release him. At the end, however, they end up getting together and she leaves pregnant with Kazuya's son. After fending off Devil from possessing her unborn child, she refuges herself and raises Jin alone 15 years, after which she's attacked by Ogre, and presumably killed by him.
Word of God, however, clarifies her status as "missing"/"in hiding".
Tropes associated with Jun:
Lei Wulong 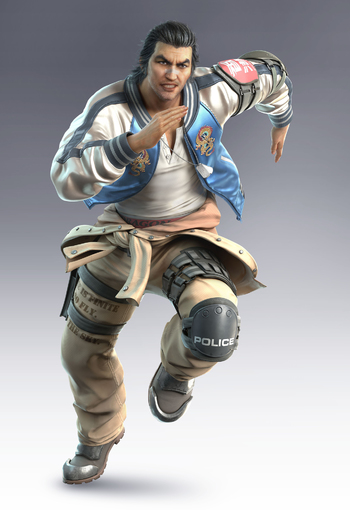 You have the right to remain silent!

Origin: Hong Kong
Fighting Style: Five-Form Animal Kung Fu and Drunken Boxing
Appears in: 2, 3, Tag, 4, 5/Dark Resurrection, 6/Bloodline Rebellion, Tag 2, 7: Fated Retribution (Season 2 DLC)
Voiced by: Wataru Takagi (2), Hiroya Ishimaru (3-5), David Jeremiah (6-current), Tomokazu Seki (Tekken: The Motion Picture)
Based on actor Jackie Chan, Lei Wulong is the man called "supercop" from Hong Kong, famous for taking down many criminals. Lei at first investigates the Zaibatsu to check the crimes of Kazuya. He continues to do so on the Zaibatsu years later in the 3rd tournament. In the 4th tournament, however, Lei got hammered with misfortunes where his girlfriend dumped him for being too Workaholic and his career plummeted. He got back on track by foiling the plan of a syndicate that planned to kill Steve Fox. Later, he investigates the issue about Feng Wei alongside Asuka Kazama, but doesn't produce good results. But before he can rest, he then starts another job: arresting Jin Kazama.
After the events of 6, Lei's investigation of Jin is halted when he suddenly disappears off the face of the Earth. He goes on holiday, and becomes a fan of Lucky Chloe in the meantime. When Kazuya is revealed as a literal Devil on live television, Lei is assigned to investigate Kazuya and G Corporation. Secretly, however, he wants to meet Lucky Chloe, as she's a G Corporation employee.
Tropes associated with Lei:
Baek Doo San

Origin: South Korea
Fighting Style: Taekwondo
Appears in: 2, Tag, 5/Dark Resurrection, 6/Bloodline Rebellion, Tag 2
Voiced by: Kaneto Shiozawa (2, Tag), Sang Hyun Uhm (5), Byeong Hwa Yun (6-current), Lowell B. Bartholomee (ENG, Tekken: The Motion Picture)
Poor Baek went through the unenviable experience of killing his alcoholic father in a training accident. He was only able to lift his despondency by challenging various dojos. Just before Tekken 2, the situation got worse. A rival of Marshall Law had somehow found out about Baek's tragedy, and threatened to go public with it unless he ransacked Law's dojo, hence setting up their rivalry. After the fight was over, Baek, having come to terms with himself and regained some semblance of sanity, returned home to Seoul, where he spent most of the next two decades training youngsters (of which Hwoarang is the only named so far). He was assumed to be killed by Ogre, but was only put into a coma, which he later woke up from.
Tropes associated with Baek:
Bruce Irvin 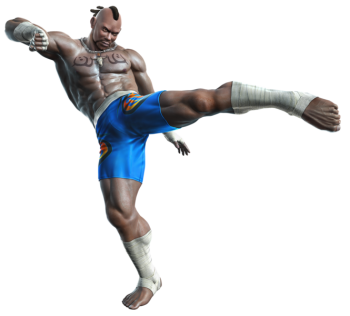 Origin: USA
Fighting Style: Muay Thai Kickboxing
Appears in: 2, Tag, 5/Dark Resurrection, 6/Bloodline Rebellion, Tag 2
Voiced by: Crispin Freeman (5, Cutscenes), ??? (5-current, Battle Voice), ??? (6-current, Cutscenes)
Kickboxer with a bad childhood. Early on, he decided to make a name for himself after growing up alone, so he got better at doing the only thing he was good at — fighting — and scrounged up enough to go to a fighting tournament in Thailand a bit before Tekken 2. His skill proved to be enough to win, but he beat the favorite for the tournament so badly that a mafia group put a contract out on his head. The hitman who was sent to kill him, as well as a Hong Kong policeman (who ends up having been Lei Wulong's partner) end up bringing the plane home down, and Bruce ends up surviving. Kazuya's men, who had presumably been following the tournament Bruce was in, found him where the plane had crashed and employed him in the Zaibatsu's private army.
After Kazuya's defeat he leaves Japan and travels the world as a mercenary, and once he learns Kazuya's alive he goes back to Japan for Tekken 5. When Kazuya drops out of the tournament he offers Bruce the position of his captain, this time with G-Corp, and Bruce agrees.
Tropes associated with Bruce: 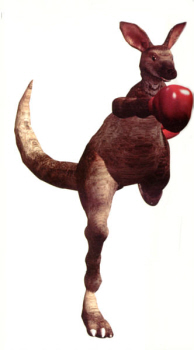 Fighting Style: Commando-style Wrestling and animal techniques
Appears in: 2, Tag,
Kazuya makes off with Dr. Boskonovitch after taking over the Mishima Zaibatsu. The goal: good old-fashioned genetic engineering to make vicious killer animals. He partially succeeds: the animals are intelligent enough to be trained. They just don't get really vicious.
The first one was Roger, a kangaroo. With boxing gloves, of course.
He enters the 2nd tournament, but anything he does there is largely unknown. Roger had a wife back then, and he became a father during his participation. Afterward, he left with his family to live in peace.
Years after, someone knew about where they lived, because Roger gets kidnapped shortly before the fifth tournament. Worried about him, his wife and son (Roger Jr.) enter the fifth tournament and find him. Things don't go well afterward.
Roger is very focused on pokes. He is so good at pokes that combos aren't really necessary with them. Unfortunately, his combo game leaves much to be desired.
Tropes associated with Roger:
Alex 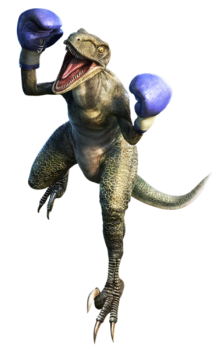 Fighting Style: Commando-style Wrestling and animal techniques
Appears in: 2, Tag, Tag 2
A deinonychus trained for military purposes, Alex is a vicious animal that was created by extracting dinosaur DNA from an insect trapped in amber, with gaps in the DNA filled in with genetic data from Roger. Alex does not seem fully mature yet, but currently has about the same fighting strength as Roger. Alex will become an extremely powerful animal once he fully matures. If it will ever happen, however, is rather unlikely.
He enters the 2nd tournament, but anything he does there is largely unknown.
Alex are very focused on pokes. He is so good at pokes that combos aren't really necessary with him. Unfortunately, his combo game leaves much to be desired.
Tropes associated with Alex:
Angel 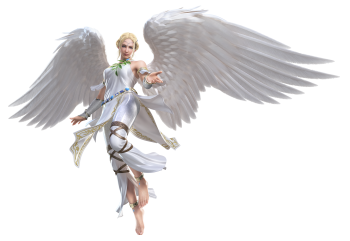 Angel in Tag 2
Fighting Style: Mishima-style Fighting Karate and supernatural powers
Appears in: 2, Tag, Tag 2
Angel is voiced by: Yumi Touma (Tag), Yuka Koyama (Tag 2)
Angel is not explained much, but it seems that she embodies what is left of Kazuya's good side during his tyrannical rule over Mishima Zaibatsu. However, Word of God stated that unlike Devil, Angel is not a part of Kazuya's soul. Also, Angel hasn't been seen since the second game (except for the Tag Tournament games).