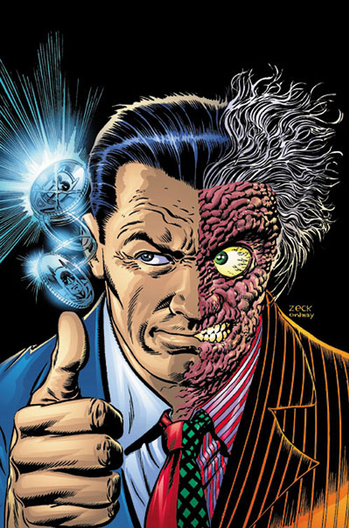 "Suppose we flip for it!"
"I am a lawyer. Yes. We the people of the United States, in order to form a more perfect Union, establish justice. Insure domestic tranquility, provide for the common defense, promote the general welfare, and secure of the blessings of liberty to ourselves and our posterity.

"I am a liar. No. We the acid scarred bitches of history of evil and hypocrisy exalt criminals to office. Vietnam, El Salvador, Chile with lovely missiles, roaring bombs of the rich and the white and the pious and burn children and torture women. Forever and ever, amen.

Much like Jim Gordon, Harvey Dent was one of the few honest law enforcers in Gotham. Young and handsome, he was nicknamed "Apollo" by the press, but beneath his good looks lay an unstable second personality rooted in his abusive childhood. The details vary from origin to origin, but Dent eventually got doused with acid, burning away the left half of his face until it resembled the monster within.

Dent's mind snapped after that, and he declared himself a mere puppet of fate. Shedding his old belief in justice, and fixated on proving the arbitrariness of free will, he is one of Gotham's most volatile crime bosses. He has the unusual habit of making all of his decisions with a two-headed coin - scratched on one side and clean on the other. All of his important decisions are decided by a flip of this coin - the scarred side representing evil, the clean side representing good. Thus his crimes and choice of victims are all determined by random chance. That being said, Two-Face has a particular animus for lawgivers, and will frequently target police stations or courts. (Yet even this is dependent on what mood he's in; the "Harvey" personality once carried a torch for a comely police officer, Renee Montoya. As Renee was a closeted lesbian, this proved a disappointment.)

The character first appeared in Detective Comics #66 (August 1942), and was created by Bob Kane.

In spite of his stature, Two-Face never made an appearance on the sixties show. (FALSE Face did, but that's a different character altogether.) Rumor has it that they considered his scarring origin too horrific for the series' Denser and Wackier tone. Another legend claims that they did briefly consider Clint Eastwood for the role, though.

Alongside The Joker and Ra's al Ghul, Two-Face is one of Batman's greatest enemies, but not because of the threat he poses to the rest of the world. Instead, he reminds Batman of how far the greatest can fall, and how he cannot save all of his allies - Batman's feelings of guilt that he failed to save his old friends and constant attempts to 'redeem' Dent remain one of the biggest themes of the character.

The character has appeared in multiple Batman media forms, including video games, animation, and the Batman film series.