Characters / A Song of Ice and Fire - Essos - The Free Cities

This is a listing of the people of the Free Cities that appear in A Song of Ice and Fire.

The Free Cities of Essos 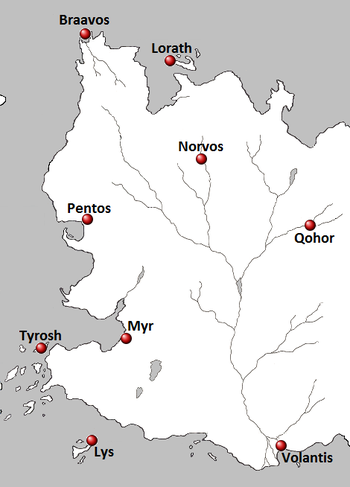 The nine Free Cities of Essos occupy the western region of Essos and have the most contact and trade with the Seven Kingdoms of Westeros. Each city is independent of the other and have their own unique culture, but they do share some cultural similarities due to their shared Valyrian origins. The nine cities are Braavos, Lorath, Lys, Myr, Norvos, Qohor, Pentos, Tyrosh, and Volantis.

open/close all folders
The Free Cities

Situated on the largest island in a group of islands in Lorath Bay, Lorath is the most isolated, smallest, poorest, and least populated of the Free Cities. The main sources of trade on the island come from fishing and whaling. The main city is built on a maze crafted by the previous inhabitants of the islands. After several civilizations on the islands were wiped out in various conflicts, modern Lorath was founded by worshippers of Boash the Blind God, who took control of the settlements that grew around their temples, but were eventually overthrown and massacred. Now Lorath is ruled over by a council of magisters. 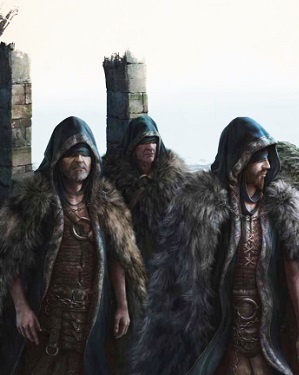 Priests of Boash the Blind God

King of All Andals

An Andal King from Lorath who desired to unite all Andals in Essos under his rule. His seat was a large wooden keep at Lorassyon. After warring for twenty years, his domain extended from the Shivering Sea all the way to the Axe and the northern river Rhoyne, unfortunately this put him in conflict with the Valyrian city of Norvos. The dragon lords defended their colony and burned him and his host outside of Norvos. Apparently nobody survived the Scouring of Lorath.

Located on an island off the southern coast of Essos, Lys is well known for two things: its famous pleasure houses which cater to all tastes, and the deadly and exotic poisons mixed by its alchemists. 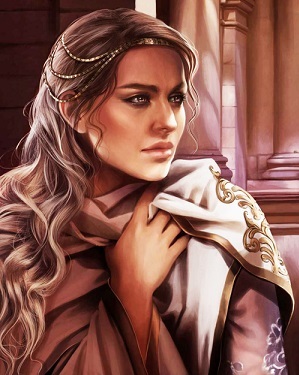 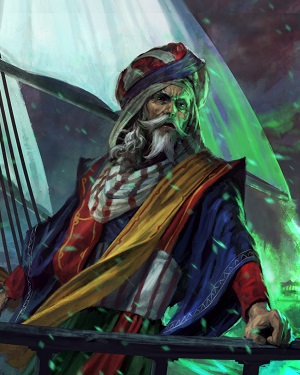 A pirate and sellsail, leader of a mercenary fleet, styling himself Prince of the Narrow Sea. Also a smuggler, trader, and banker, and a close friend of Davos Seaworth. He's one of the sellsail admirals hired by Stannis for his campaign to take the Iron Throne.
Tregar Ormollen

A powerful Lyseni merchant prince who takes Lynesse Hightower as a concubine from her husband Ser Jorah Mormont.
Lord Varys

The Master of Whisperers who served on the Small Council of the kings Aerys II, Robert I and Joffrey I. A (purportedly) Lyseni eunuch with enigmatic origins and motives.

A pirate-lord from the Stepstones that operated during the reign of Aegon I Targaryen.
Sharako Lohar

The Triarchy's admiral, who led their fleet during the Battle of the Gullet.
Serenei of Lys 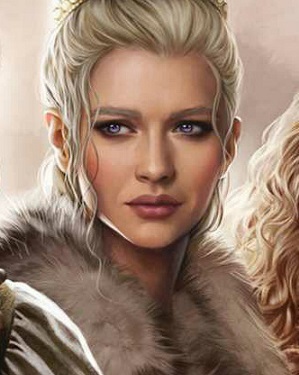 The daughter of an ancient but impoverished line, Serenei was brought to court by Lord Jon Hightower, Hand of the King. She was the ninth recorded mistress of Aegon IV, and the mother of Shiera Seastar.

See the Band of Nine page.

The head of House Rogare and the Rogare Bank, who at its peak competed in power and influence with Braavos' Iron Bank. He was the father of Lysaro, Larra and Moredo Rogare.
Lysaro Rogare

The eldest child and heir of Lysandro Rogare. Although Lysaro was eventually killed by scourging at the Temple of Trade, his siblings escaped execution.
Larra Rogare 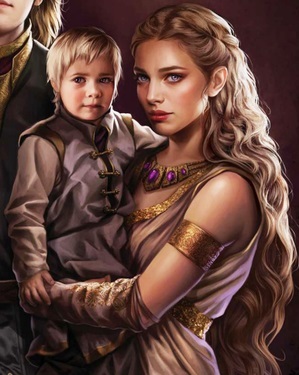 The wife of King Viserys II, though she was long dead by the time he ascended to the throne, and the mother of his three children, Aegon IV, Naerys, and Aemon. Born the daughter of the wealthy and powerful Lyseni banker Lysandro Rogare, she married Viserys when he turned up in Lys after the Dance of the Dragons. When Alyn Velaryon brought Viserys back to Westeros, Larra and her brothers went with them. But after several years in Westeros, she left Viserys to return to her native Lys.

The third son of Lysandro Rogare, younger brother of Lysaro and Larra. A soldier that carried the Valyrian steel sword Truth.
Sandoq the Shadow

A former pit fighter at the service of Larra Rogare. When a coup against the Rogare family was launched by supporters of Unwin Peake, he held off the attackers until they were called off.

Situated on the shore of the Sea of Myrth, the Free City of Myr is renowned for its expert craftsmen. The city produces some of the finest lace, glass, and crossbows in the known world, among many other fine items. Ruled by a group of magisters, the people of Myr are often dark-haired and dark-eyed.
In General
Thoros
See the Brotherhood Without Banners character page.

A Myrish mummer turned sellsword who fought for the Blacks during the Dance of Dragons.

Located in the the Hills of Norvos along the banks of Noyne, Norvos was founded by religious dissidents from Valyria who wished to have a city made up only of true believers. Although nominally ruled by a High Magister and a council, the Bearded Priests have true control over the city.
In General
Mellario

"What sort of father uses his own flesh and blood to pay his debts?"
—Mellario

The estranged wife of Prince Doran Martell and mother of Arianne, Quentyn, and Trystane.

A large port city on the western coast of Essos, Pentos is ruled over by a council of wealthy Magisters who elect one of their own as Prince of Pentos. Originally built as a trading outpost of the Valyrians, the initial settlers of Pentos interbreed with the Andal natives of the region freely, making the blood of Old Valyria run weak in its inhabitants.
In General
Illyrio Mopatis 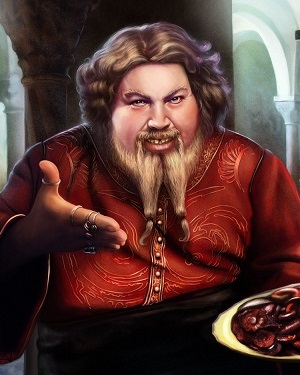 "Illyrio believes in no cause but Illyrio. Gluttons are greedy men as a rule, and magisters are devious. Illyrio Mopatis is both."
—Ser Jorah

A morbidly obese merchant and Magister of Pentos who arranged for Daenerys' marriage to Khal Drogo in the first book and gave her three dragon eggs as a wedding gift. He supports the Targaryens' campaign to regain the Seven Kingdoms and, following Viserys' death, ends up shifting his attention towards helping Daenerys. Though greed may play a part in his actions, his schemings with Varys hint at deeper motives.
Illyrio's favorite servant

A beautiful and seemingly cheerful young servant woman who works in Illyrio's manse.

The Lord of Air

A Pentoshi merchant, trader and money-changer who rose from nothing to become the richest man in Pentos. He was Jaehaerys I Targaryen’s Master of Coin.

The City of Sorcerers

The easternmost of the Free Cities, Qohor sits on the banks of the Qhoyne and is near the great forest of Qohor. Founded by religious dissidents, Qohor worships the Black Goat. The city has a dark reputation, with many claiming that its inhabitants practice human sacrifice, necromancy, and blood magic.
In General

A large harbor city situated on an island off the west coast of Essos, Tyrosh is ruled over by an Archon chosen from amongst the most powerful families of the city. Initially founded as a military outpost of Valyria, Tyrosh has a history of attempted conquest and expansion. One of their more colorful cultural traditions is the use of unique sea snails only found in the vicinity of the city to dye their hair numerous unnatural colors. These dyes remain one of their most important exports.
In General

A smuggler and pirate Davos Seaworth once operated with.
Alequo Adarys

A devious Tyroshi captain-general who declared himself King of the Narrow Sea during the Regency of Aegon III Targaryen.

The eldest daughter of the Valyrian Freehold, Volantis boasts a large harbour, said to be able to house Braavos comfortably within it. As the oldest Valyrian colony, it saw itself as the inheritor of its hegemony and waged war against the other Free Cities in the "Century of Blood" after the Doom of Valyria. As such, they have several smaller cities across Essos under their control after several periods of aggressive expansion under Tiger rulers.
In General
Nyessos Vhassar

Nyessos Vhassar is one of the Triarchs of Volantis. He's a member of the Elephant party, the faction of merchants and moneylenders, advocating trade over war. Not only he's on Illyrio Mopatis' payroll, it is also said in Volantis that he has been bought by Yunkai in order to get Volantis to wage war against Daenerys.
Widow of the Waterfront

Widow of the Waterfront

A pleasure slave purchased by a Triarch of Volantis named Vogarro, who fell in love with her, freed her, and married her. After his death, she became a wealthy and influential businesswoman by taking over his businesses.
Penny

A dwarf entertainer from the Free Cities who teams up with her brother Oppo in a fake jousting show riding on a pig and dog. After her brother is mistaken for being Tyrion Lannister and murdered, she has a chance encounter with Tyrion in Volantis and gets dragged along with him on his journey to Meereen.
The Tiger Cloaks

The city guard of Volantis, named after the Tiger Party—the more military minded of two factions of Volantene politics. They are slaves.
Sunset girl

A prostitute from the Volantene town of Selhorys.

A member of the Tigers whose unbroken succession of conquests and triumphs ended rather abruptly when he was eaten by giants.
Horonno

A Triarch during the Century of Blood. He was much beloved, and reelected time and time again, causing him to rule as one of the three Volantene triarchs for forty years. Eventually, Horonno tired of elections, and named himself triarch for life. The Volantenes, angered by Horonno's attempt to usurp the ancient customs and laws of Volantis, overthrew him. Horonno was tied between two elephants and ripped in half.
Trianna

A Triarch who lived 300 years prior. She was one of the elephant party that brought down tiger rule, ending the old wars of the Century of Blood.
Tessario the Tiger

The Tiger, the Thumb

A sellsword from Volantis at the service of Lord Unwin Peake, serving as captain of his personal guard the Fingers. When his involvement in the coup against House Rogare and Thaddeus Rowan was exposed, he was captured and tortured to death.