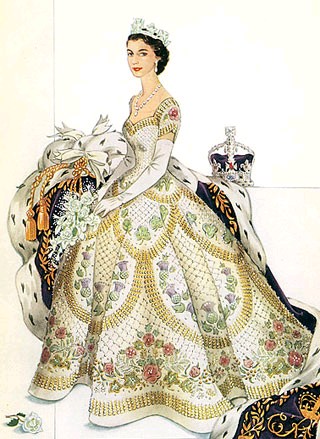 "When life seems hard, the courageous do not lie down and accept defeat; instead, they are all the more determined to struggle for a better future."
—Her Gracious Britannic Majesty Queen Elizabeth II, 2008
Advertisement:

Her Majesty Queen Elizabeth Alexandra Mary (Elizabeth II to you, Brenda to readers of Private Eye, Mrs. Windsor in Stroke Country, Lilibet as a child, Gertie to her friends, Cabbage to her late husband, Betty to Alucard, Kyuubi Emiko to readers of Pocketville Twilight and Nihonverse as a whole, "Mummy" to Prince Charlesnote at her Golden and Diamond Jubilee celebrations, he's also used the slightly more formal "Mama", accent on the second syllable, "Granny" to her eight grandchildren, and "Gangan" to the next generation) of the United Kingdom of Great Britain and Northern Ireland. Near universally known as the Queen.

Also Queen of fourteen other countries besides the United Kingdom, including Canada, Australia, New Zealand, and Jamaica. Used to be at various times Queen of an additional seventeen countries which have since become republics, including South Africa and Pakistan. She was born on 21 April 1926 and acceded to the throne on 6 February 1952, on the death of her father, George VI. Of her five most recent British Prime Ministers, four weren't even born when she became Queen, and the fifth wasn’t even a year old. On 9 September 2015, she became the longest-reigning monarch in the history of the United Kingdom and its predecessor states, surpassing the record held by Queen Victoria. In October 2016, following the death of King Rama IX of Thailand, she became the longest currently-reigning monarch. On 6 February 2022, she became both the first female and the first British monarch to celebrate a Platinum Jubilee, and if she is still on the throne on 27 May 2024note (When she'll be 98; which is certainly possible considering her mother nearly made it to 102!), she will surpass the Sun King as the longest-reigning sovereign in world history (for whom we have verifiable dates anyway).note In theory, Pepi II Neferkare of the Egyptian Sixth Dynasty has the longest claimed reign of any ruler of a great power—supposedly reigning for 94 years (after inheriting the throne at the age of six) in the 23rd and 22nd centuries BCE—but most historians agree this is based on a misinterpretation and he "only" reigned for 64 years.

Although she appears to be quite diminutivenote she stands only 5 foot 2 inches (roughly 158 cm) in height, contrasted to her lanky husband and her 6'3" grandson William. and soft-spoken, those who've met her will near-universally say that she is actually a force of nature with a steel-trap mind, a Sugar-and-Ice Personality, and an understated, but devastating, sense of humour, which probably explains why she and Prince Philip worked so well together - she can and will give it just as good as anyone else. Even the most ardent republicans, after meeting her, can't help but end up respecting her and what the crown represents even if they disagree with the institution on principle, and a number have said that they'd like the monarchy ended - but only once the Queen dies. She, amongst other leaders, is very close to getting a 100% Adoration Rating (she is, after all, the most popular British royal and royal in general) even though it's impossible to actually achieve that.

Although the monarchy is now mostly ceremonial, the Queen continues to play an advisory role in the running of her realms and keeps up to date by going through stacks of government documents every day. She has regular weekly meetings with her British Prime Ministers and will also provide counsel to the Prime Ministers of her other realms during visits or as requested. These meetings originally started as elder Prime Ministers providing brief updates to a young queen, but eventually morphed into an elder stateswoman giving much-needed advice to her less-experienced officials. While the content of these meetings is strictly confidential (one of the few instances where both parties simply get to be alone), Prime Ministers of all stripesnote Tory, Labour, Monarchist, Republican, and otherwise have stressed just how vital these meetings arenote her most recent PMs describe them as visiting a grandmother, a priest, and a therapist all rolled into one and that there is very little that slips by her. In a way, she has become a critical part of the institutional memory of the British government.

Since the Queen is the best-known monarch in the world, she's turned up quite a lot in fiction, usually as an Anonymous Ringer or Invisible President, in part due to her function as a constitutional monarch. She's also usually the exception to the well-known trope where queens must be malevolent. Despite a wobble in the early nineties, Elizabeth remains highly popular in the UK.

Apparently a big fan of Doctor Who and got revenge on Michael Grade for cancelling the show in 1989 - he's the only BBC controller to not receive a Knighthoodnote  Knighthoods are issued by the Queen and only the Queen.; make of that what you will. A huge technophile, quite tech-savvy; she was the one who insisted on televising her 1953 coronation once her husband Philip brought up the idea. Former President Barack Obama's gift of an iPod to her was not a gaffe, as commonly believed: she did, in fact, already have one, but had mentioned it was a generation or two out of date and she would really like a new one. Plus, the royal family now has a YouTube account

. This was also Her Majesty's idea. She is also an avid Animal Lover, having owned several horses and Pembroke Welsh Corgis over the course of her reign.

In a highly surprising, hilarious, and touching display of sportsmanship, she made her acting debut in a scene opposite Daniel Craig as James Bond for the opening ceremony

of the London 2012 Olympic Games. Bond arrives at Buckingham Palace to escort the Queen to the Olympic opening ceremonies, only have to awkwardly wait while she finishes up some work. They travel to the stadium via helicopter and (with the help of a stunt double, naturally) parachute into the arena. Cool Old Lady indeed.How cool? Danny Boyle thought that the pitch would be rejected outright only to be floored when the Queen agreed to appear and threw in her own ideas. She was the one who came up with the bit that she'd be busy and force Bond to wait awkwardly while she finished up. And when she learned that they planned to fly a helicopter through Tower Bridge, she pointed out that the model they selected wouldn't be able to perform the stunt and personally recommended the model used in the final film. Also, the whole project was kept an Over-the-Top Secret (Prince Philip was the only one outside the production team who knew what was happening) because she wanted to surprise her family.

Has had quite a few things named after her, including (but not limited to) a famous ocean liner (commonly abbreviated QE2), a famous clock tower

, a road bridge (part of the Dartford River Crossing), and a random uninhabited chunk of Antarctica. The US Army even got in on it in 1944, when a crew in the 306th Bombardment Group (Heavy) based at Thurleigh named their B-17 ''Rose of York'' in honor of her. Then-Princess Elizabeth not only appreciated it, she showed up at Thurleigh with her parents in tow and personally christened the bomber

, which went on to fly 62 successful combat missions before being shot down over Berlin.

She's also the only person in the UK allowed to declare war.note We're literally not kidding; yes, the Prime Minister announces that we're declaring war... but only after the Queen has signed off on it and basically pressed the great big threatening button.

At one point she had about fifty bazillion corgis. Sadly, after the death of her last corgi, she had previously decided to stop breeding them, so as not to leave any behind when she dies. However, as of 2021, Her Majesty has adopted a pair of corgi puppies (one half-dachshund), named Muick and Fergus.note Unfortunately, Fergus passed away at only five months from a defect, leaving Her Majesty with only Muick and Candy, the latter being her only dorgi (Dachshund-Corgi mix). Then, in June of the same year, Her Majesty received another new corgi puppy, whose name is currently unknown. Then in 2022 she becomes the owner of Lissy, a cocker spaniel.

She also was a Wrench Wench back during World War II. She was trained as an army mechanic - while she served as an ambulance driver, she had to be trained as a mechanic as well due to British vehicles being what they are.

Sadly lost her husband in 2021 after seventy three years of marriage.

See also: The British Royal Family (for the current members), The House of Windsor (for the more historical members)

Appearances of the Queen in fiction: