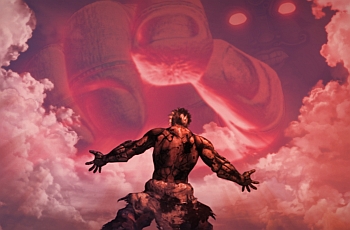 COME ON!
"Fine! The gloves are off, pal! C'mon, lemme see a little wrath! Smite me, O mighty smiter! You're the one who should be fired! The only one around here not doing his job is you! ANSWER ME!"
— Bruce Nolan, Bruce Almighty
Advertisement:

Our character has had a bad — really bad — day/episode/life. Things keep going wrong, ranging from a bad day of training to failing to stop The End of the World as We Know It. It seems like nothing can help them short of a great Deus ex Machina, but it's failed to come. They've already kicked in a few doors, punched a few walls, had their fit of Unstoppable Rage, and told everyone to Leave Me Alone!

They've been patient and persevering long enough. Now they break down, turn their face to the sky, and unleash all their frustration and anguish at the highest up of the Powers That Be, most easily interpreted as God, demanding an answer. "Is that all you've got? Come on, I can take more! Smite Me, O Mighty Smiter!" Twice as likely to occur along with pouring rain, thunder, and lightning.

A notable subtrope is when the character involved is implied or explicitly an atheist and they refer to this fact pretty much in the same sentence. A Sister Trope is Religious Russian Roulette, where the character instead threatens to become an atheist unless God/whoever gives them an answer.

Indiscriminate by time, culture, religion, and even age demographic.

We've all had one of those days.

See also Clifftop Caterwauling, Crisis of Faith, Rage Against the Heavens. Compare and contrast Prayer of Malice, when the character asks God to smite someone else.