This is a list of characters that appear in Genji Tsuushin Agedama anime series. The tropes got too long for just “Main” and “Supporting” characters, so they are now grouped. The order of the folders is based on the most important character’s order in the Ending Credit. The in-folder order is as per the Japanese Wiki note because the Ending Credits' order for the minor characters don't make sense, to include leaving Kensaku-sensei completely off their "top-15" and thus not shown at all.

For an hero anime targeted at primary school kids, Genji Tsuushin Agedama has complex and grey human relationships. The Heikes are allies, and Rei is almost always an antagonist. But Tsuripan (Harada Katsuo) isn't always on Rei's side, and except for his world-conquering plan Raizō is just as likely to talk civilly with Agedama & Ibuki or treat them to something as be hostile, and he could occasionally be more aligned with them than with Rei.

Photos of the group’s residences are used as the “group photo”. Socioeconomic conditions are integral to the characters and influence actions and choices to a greater extent than many other anime. note As an example, if Tomoyo in Cardcaptor Sakura was brought down to upper-middle class like Sakura, or if Sakura was as rich and lived in as big a house as Tomoyo, they would have almost the exact same relationship. In Agedama, if for example Ibuki was raised to Rei's bracket, their relationship will be hugely different. And the residence is the most visible symbol of their socioeconomic status.

Name Order Confusion warning: We are in 2019, and the Japanese government is implementing surname first for Japanese names in English

. This character sheet will do the same.
SPOILER Warning: This character page has substantial spoilers. Since Agedama is a show that relies heavily on execution rather than the newness of its premises and the push for providing context, this page errs on the side of providing detail. Hopefully they are more teasers than spoilers. 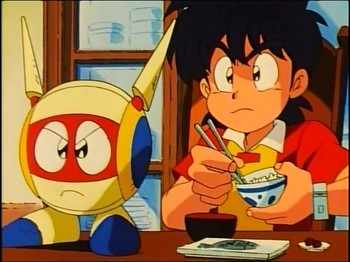 Eating ordinary food in a Big Fancy House
Planet Hero is the origin of the superheroes we know. Not much is known about them, but their summer vacation is the equivalent of one full Earth year note implying their orbital period is at least six years, making for an interesting solar system.

Retirees sometimes migrate back to Earth to live secluded lives and are perceived as gods or ghosts, while residents with “evil hearts” are stripped naked, rendered amnesiac and exiled to distant planets.

Since Agedama's house does not represent their socioeconomic profile, here is a picture of what they eat instead.
Genji Agedama 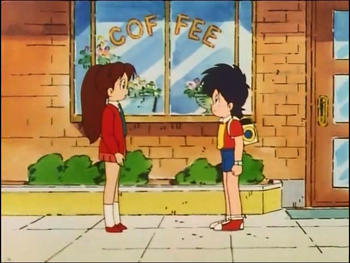 Agedama (right) & Ibuki (left): Yes, the girl is taller
The protagonist of the story, he is a superhero-in-training ("Agedaman") who comes to Earth from Planet Hero during a one-year long summer break to train himself.

A picture is worth a thousand words: never mind Rei, notice how he is a bit note such that they can still get away with an occasional smaller Ibuki shot for effect shorter than Ibuki. He is not, and not meant to be, all powerful, really cool looking or dominate either the scenes or the relationship. 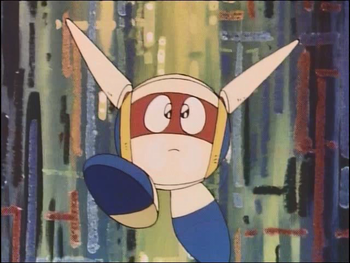 Waprō in the transformation scene
Agedama's robot companion, who fuses with him to form Agedaman.

In addition to the form on the right, he can retract his legs into a floating volleyball, become a pocket bike or a jet, a backpack, a mechanical version of a dog and a submersible. 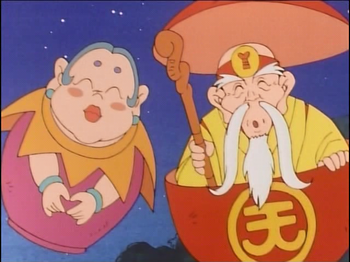 Ebiten (right) and Okame (left)
Two former heroes that reside on Earth post-retirement. They act as guardians for Agedama during his stay. 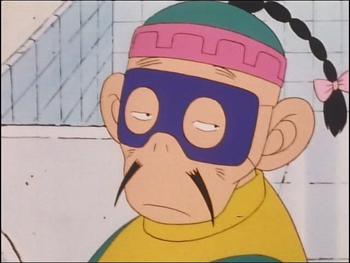 Uroncha on his first appearance
Claiming to be a student, he is actually another traveler from Planet Hero and a member of the Space Patrol. 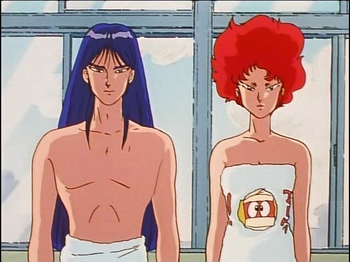 Modam and E-hub still in their amnesiac state
Two humanoids who arrived on Earth in episode 46 stark naked and in an amnesiac state. Recovered their memories after eating an apple from the Monster of the Week. 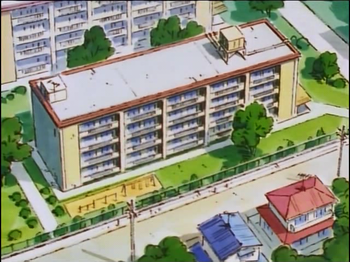 At least the apartment windows face open space rather than another apartment within the danchi
The Heikes are a typical middle-class family (except for the rather extensive family tree on the mother's side). They aren’t poor – living much better than Kuki’s Men in Black and with enough spare money for Ibuki to have dance lessons. But they are still tenants in a danchi

(low cost housing estate, often public) and the detached house seems as far away as ever.

To be sure, it is quite well-appointed inside and the rooms are reasonably spacious. But as it turns out, living in an apartment means being subject to the arbitrariness

of the landlord and her representative (管理人). A family is not completely autonomous, even within the confines of its home...
Heike Ibuki 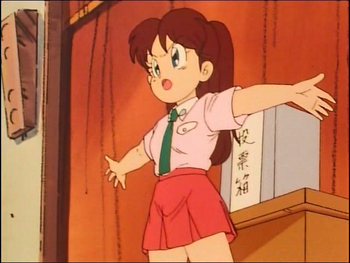 Heike Ibuki, protecting a ballot box
The heroine of the story and Agedama's Love Interest. While she might initially look plain compared to the flashier Rei, she is a Nice Girl and the story does not lack in endowing her with interesting traits, and of the trio she is the only one with a completed Growth Arc.

While she was always willing to stand up for what is right and for others, as the series goes on, she will gain more self-confidence, be less deferential and stand up for herself. Her grades even get a bit better, much to Rei’s annoyance.

In previous years, it seems that she avoided problems by Deliberate Underperformance and being passive (which still left her 2nd in grades), but this year the trope floated above water. Cue attention and conflict from Rei.The result? Let's just say Omyomiko has sent monsters after her for less before.
Heike Kodama

Voiced by: Ootani Ikue (excepting his cameo in episode 6) 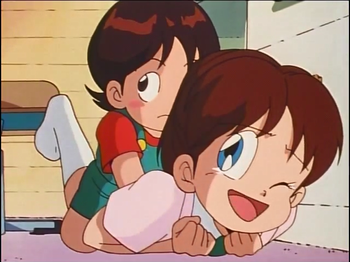 TV Tropes seems to have all Sibling Tropes, but not one to describe the perfectly normal and healthy, no games played, relationship between Kodama and Ibuki. So, here's a picture instead. 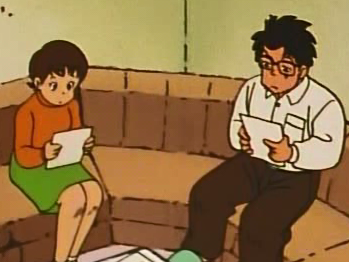 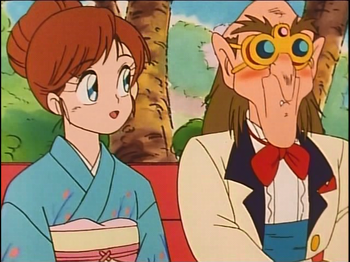 Heike Yamabuki (left) and Kuki Raizō (right) on their omiai.
A distant relative of Ibuki’s on her mother’s side. Despite their distance by genealogy, Ibuki seems quite familiar with her and looks out for her.

Comparison of living conditions
Starting from a background of destitution in WWII, the Kuki family rose in two generations to become the richest in the world. Unfortunately for those working for and with them, they became Nouveau Riche too fast to internalize concepts like Noblesse Oblige, or even "middle-class" skills like proper manners and people-management skills. Then there is their ambition…
To the right, starting from the top left corner is the Kuki residence, then Satou, Tanaka and Suzuki's residences. Not depicted is the train roaring by Suzuki's apartment. Taking care of their staff is clearly not one of the Kuki family's skills.
Kuki Rei 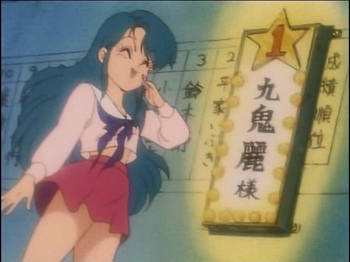 I'm first and if you aren't first, you're insignificant. note And don't you dare even parallel me.
The granddaughter of Kuki Raizō, the head of the Kuki Consortium.

To the right is Rei's worldview as of the start of the series. It reasonably corresponds to the then classroom situation, but she will soon have to learn to adapt to a different one. 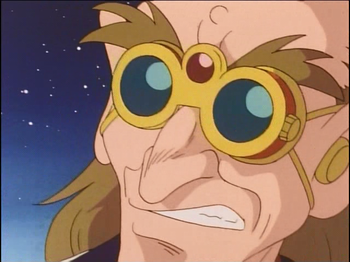 Raizō the world conqueror and hassled granddad
Also known as Nostradamus XI, he is the head of the Kuki Consortium. In his youth, he was poor, but by using the prophecy book left by his ancestors he was able to pick the correct investments and turn himself into a man richer than Rockefeller.

In his old age, he now lives with his granddaughter, even as his son and daughter in law are constantly on the move worldwide to manage his enterprises. Having too much free time on his hands, he seeks to Conquer the World with monsters created from a goseimashin (synthesis machine - essentially an alchemy cauldron). 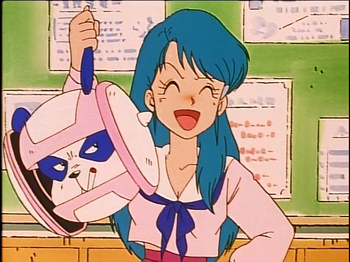 PC-rō not being treated very well by Rei
After Rei tried and failed to get Waprō, she asks her Granddaddy to make her something similar. He duly complies and synthesizes Rei's panda doll (which she just tore) and presumably some PC parts note the exact composition was not shown to form PC-rō.

Unfortunately for Rei, PC-rō did not turn out to be nearly as cute, as obedient or as multi-functional as she had hoped. He can, however, combine with Rei to form Hyperomyomiko. 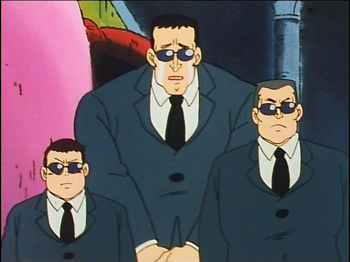 Suzuki (left), Tanaka (center) and Satou (right), in the weekly ritual of "Who becomes the Monster"
The butlers for the Kuki Consortium, serving Raizō and Rei. 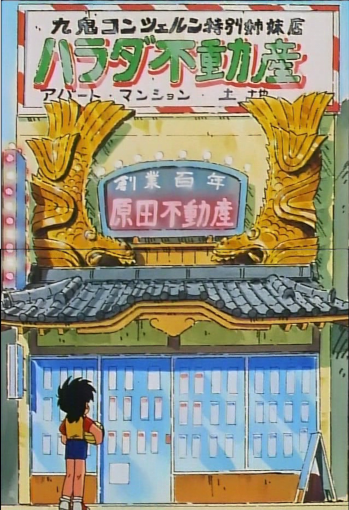 How much dignity is opulence worth?
The Haradas are a family business running the Harada Fudousan kabushiki-kaisya (Harada Real Estate Company Ltd), a subsidiary company to Kuki Consortium.

To the right is their combination office/residence – for a de facto sole proprietorship with no visible staff outside its family members it’s quite opulent. But a price has to be paid for living above your means.

The family and company essentially represent the lot of the "junior companies" maintaining and trying to benefit from a semi-autonomous existence within a larger keiretsu. Except in their case, "semi-" autonomy seems more like none.
Harada Katsuo/ “Tsuripan” 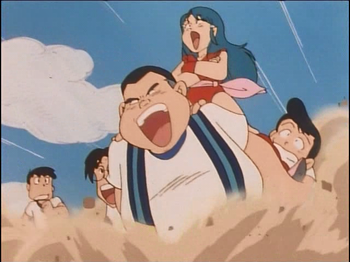 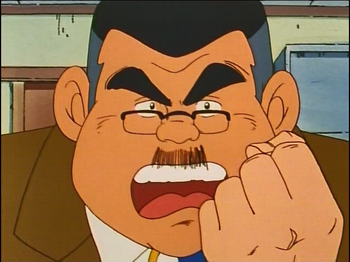 "Why do you think I kowtow to the Kukis?"
The father of Tsuripan and the owner of Harada Fudousan. 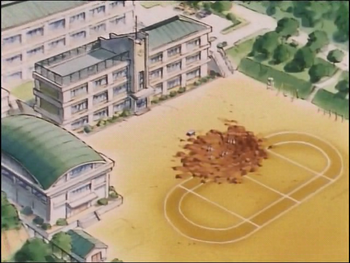 Is it b/c the poor are susceptible to economic pressure?
To the right is Morisoba-East primary school, the one all the characters go to (except for Hikari who goes to Aoyama Gakuin).

For a school owned by the flashy Kukis, and serving their Ojou, it looks more like a no-frills Japanese public primary school, lacking luxuries like uniforms and swimming pools.
Morikawa Kensaku 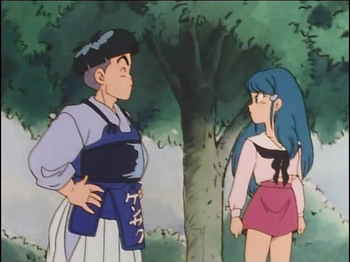 Kensaku-sensei (left) reasoning with Kuki Rei (right) to let Agedama off this once.
Almost always just Kensaku-sensei, he’s the class teacher for Year 4 Class 3, and one of the few school officials who is not complete putty in the face of Rei's Screw the Rules, I Have Connections!
However, even he has to live with Rei's power (in the right example, Rei's right to call for Agedama's punishment is never questioned), and he has to balance when to stand firm and when to accede to Rei’s tantrums.

Has a crush for Hitomi-sensei. 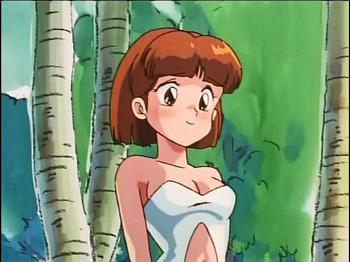 "I thought one-pieces are conservative, but it seems I was wrong."
The music teacher for Morisoba East Primary School. Like her compatriot, everyone uses her first name (Hitomi-sensei) exclusively. 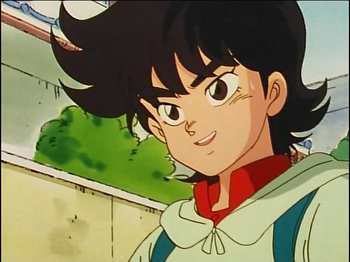 Yumenokouji Hikari, making the decision that cost him all chance of winning Ibuki's hand note though he never realizes it
The young heir to the rich Yumenokouji family, and essentially a Mr. Perfect. 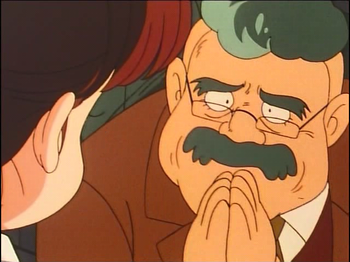 Read the air. I have a lord to please.
The principal of Morisoba East primary school.

It's hard to choose his photo - the other candidates were him on his knees to Rei and him openly telling his students at the marathon they should just let Rei be first. But this one of him having to beg a common student in trying to fulfill the Kuki's wishes best demonstrates the pathos of his position.

It's hard serving a feudal lord when the commoners don't believe in feudalism or play by its rules anymore. 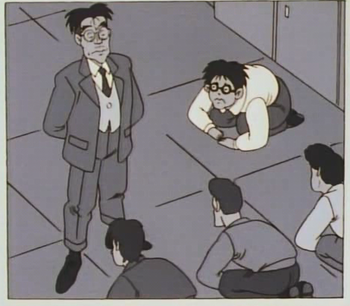 At least he can lord it over the other teachers.
Exactly What It Says on the Tin, he barely has any presence in the show. 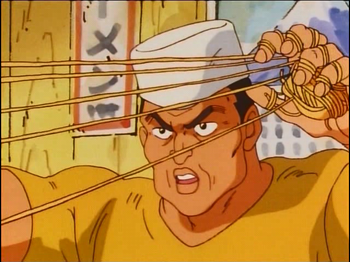 The Master executing his Noodle Attack.
Ganko-tei is the name of the only known ramen shop in town. It usually doesn't have that many customers, but serves as Kensaku-sensei's favorite place for lunch, and is the only food shop the cast (other than Rei) visit. 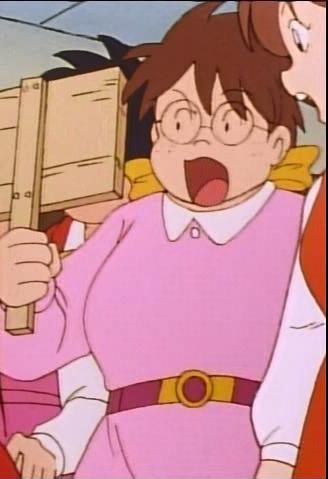 Also available in blue (see episode 1), Furusawa's not very nice to boys.
The only named (no first name though) classmate outside of the main characters, she is a fan of Agedaman. Only has lines in episode 28, but she does send fanmail later and she is present in earlier episodes.