While Gotham was under siege, former Titan Victor Stone (aka: Cyborg) saw a need for a team of heroes that would handle any crisis that occurred in cities without a dedicated protector or who could investigate other matters of concern without violating the U.S. government ban on the JLA acting in international affairs. So he set up shop inside an old secret training and meeting facility that the ‘super friends’ used to use, in the quiet East Coast town of Happy Harbor. This secret team was never given a name, but Cyborg liked to call it ‘Young Justice’ on account of most of its members being teenagers and young adults.

The Team was formed by the founding seven of Justice League during their meeting in 2014. Officially, the Founders' Meeting didn't take place, but in reality, the established a branch of the Justice League dedicated to Covert Operations. "The Team" would go on secret missions for the League that ARGUS and the United Nations do not know about. Operating out of Mount Justice, Red Robin led his fellow former Titans on covert missions. 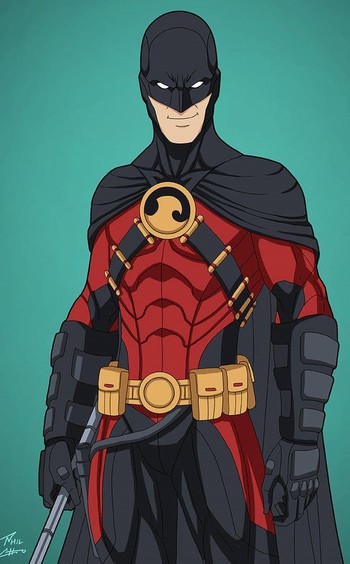 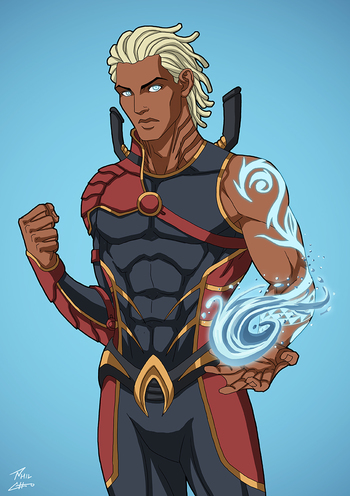 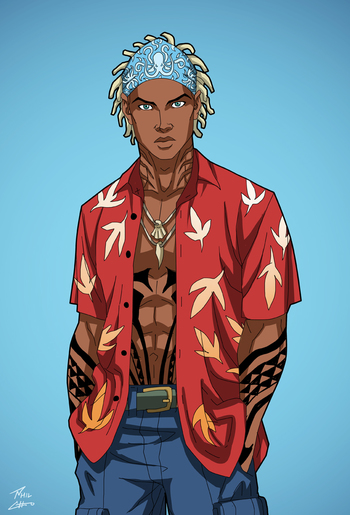 Garth's successor, Jackson Hyde (Kaldur'ahm) is the son of Black Manta and a exiled atlantean mother. Despite his father's lifestyle he's chosen the path of the hero as Aqualad. Somewhat stoic, he soon becomes the team's voice of reason when it comes to dealing with obstacles, whether they be friend or foe. 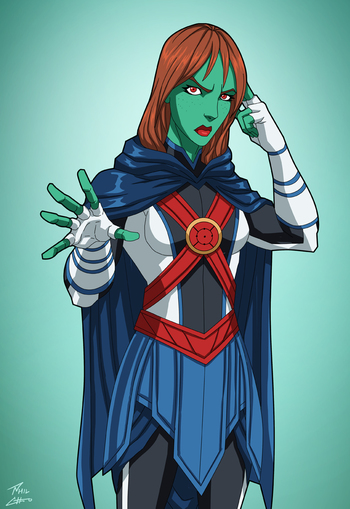 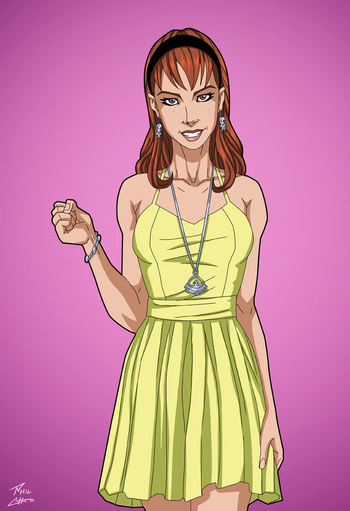 The good-natured niece of J'onn J'onzz, the Martian Manhunter. M'gann is enthusiastic and eager to please. 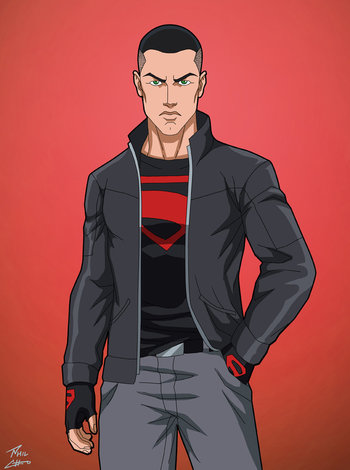 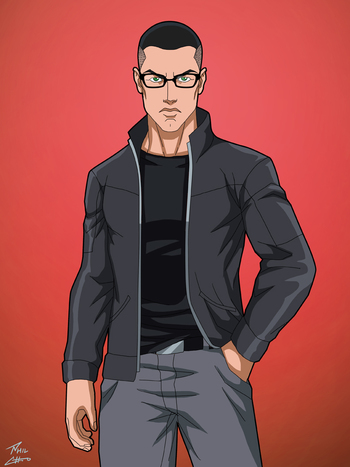 Project Kr Match A1 was designed by Project Cadmus as a clone of Superman, meant to replace him if anything should ever happen to the Man of Steel, or to take him down should Superman ever turn from Truth, Justice and the American Way. Or, in exact words, from the Light. He was freed from the influence of Mind Control by Kid Flash, Aqualad and Wonder Girl, and after shaking off the brainwashing, made his own choice to join the others. Once removed from his stasis, the clone was given a name by M'gann, who had chose to refer to him as Conner and given the moniker "Superboy" by Kid Flash. 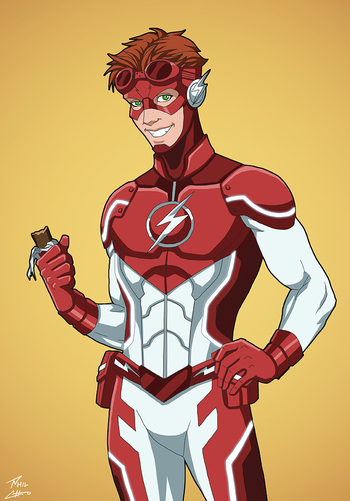 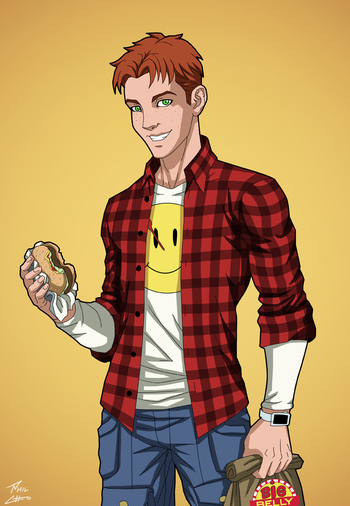 Wally West is the junior partner and nephew-by-marriage of Barry Allen a.k.a The Flash. When Cisco Ramon mentioned he had set up equipment to test that theory inside the particle accelerator, in a huge Contrived Coincidence, lightning suddenly struck the particle accelerator and Wally was bathed in them, giving him the same powers as the Flash. The Flash then taught Wally everything he knew about Super Speed and gave him the identity of Kid Flash. He is hotheaded and impatient, but quick witted and clever. Wally would later become Impulse after he passed his Kid Flash mantle to his cousin Bart Allen. 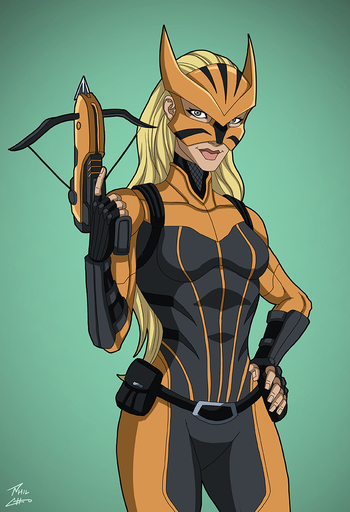 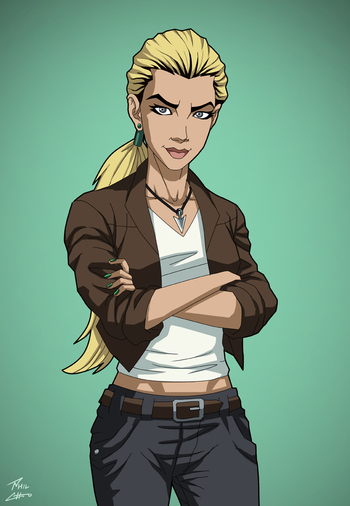 Artemis Crock is the daughter of two members of the League of Assassins: Lawrence "Crusher" Crock (aka: "Alrriadi" or "the athlete") and Paula Nguyen (aka: "Namira" or "Tigress") and the half-sister of another assassin, Paula’s older daughter, Jade Nguyen (aka: "Yabtasim Alqat" or "Smiling Cat"). Artemis herself spent the first six years of her life in League training camps, safehouses, and the like. When Artemis was still a child, her mother was injured while protecting Nyssa al Ghul and her infant son from an attack by the HIVE. Since Paula’s injuries left her paralyzed, the League allowed Paula and her daughter to travel to the United States where they would maintain deep cover and see to the upkeep of League safehouses.

After she begged Bruce to take her in and being shot down as Bruce was in a dark place and had no interest in another "screwed up kid", Oliver Queen decided to show Artemis some mercy, after all her mother had saved the life of the son he had never had the chance to meet. The way Ollie saw it, he was paying off a debt by protecting Paula Nguyen’s child. 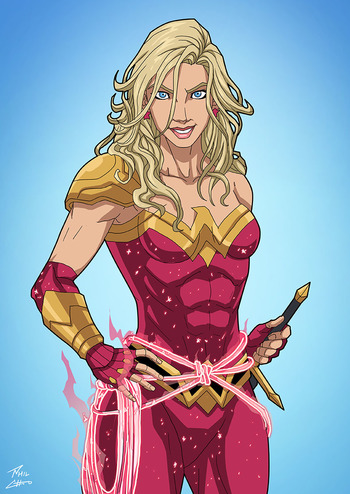 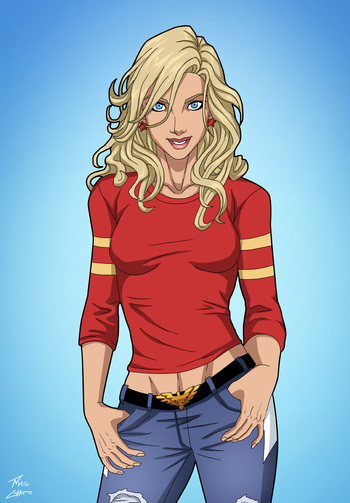 Cassie Sandsmark is the daughter of archeologist single mother Helena Sandsmark in Gateway City. When Wonder Woman was spending more time in Gateway City and Cassie began to feel a strange bond to her. This bond became so familiar to Cassie that when she was Diana Prince at the Greek Exhibit, Cassie knew she was the Amazon princess. Before Cassie introduced herself, Circe arrived to steal a medallion from the exhibit, forcing Diana to run off for a quick costume change. To prevent Circe’s escape, Cassie grabbed some old weaponry from a display to stall Circe: but was chocked to find her touch woke the dormant magic in the archaic weaponry. After seeing this display, Wonder Woman took Cassie to Olympus to meet their shared deadbeat dad: Zeus. 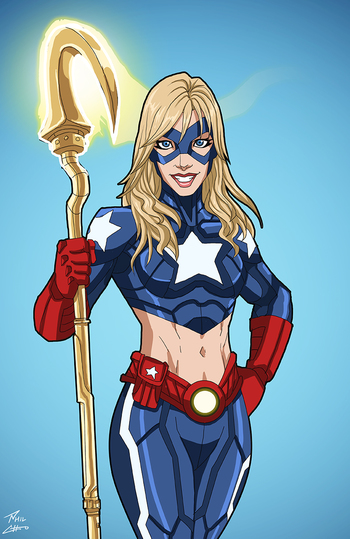 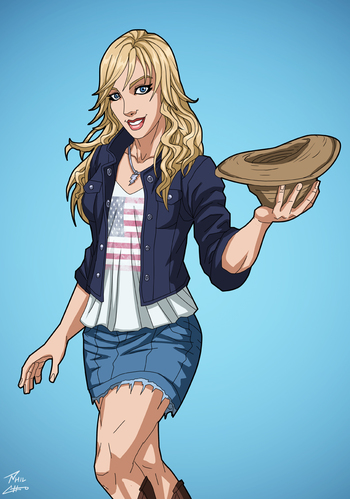 Courtney Whitmore is the daughter of Barbara Whitmore, a single mother from Gotham City that had fled across the country to escape her abusive boyfriend and raise her then unborn daughter in peace. When she found the costume of the original Star-Spangled kid in her home, assuming the mantle for herself — much to the annoyance of her stepfather, engineer Pat Dugan. As a result, he built a robotic exoskeleton called S.T.R.I.P.E., and they began fighting crime together.

After Ted Knight aka Starman gave her his Cosmic Staff, Courtney rebranded herself as Stargirl, and she joined the Young Justice, Seven Soldiers of Victory and later the Justice League alongside S.T.R.I.P.E. She'd later serve as a member of the Team on her own, without the aid of her stepfather. 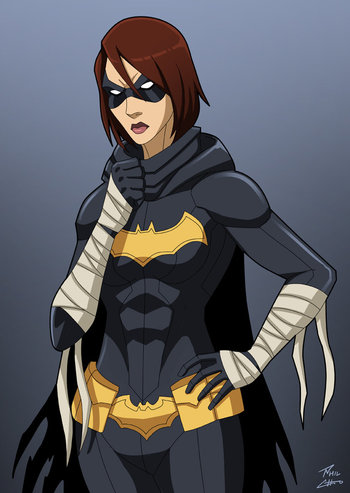 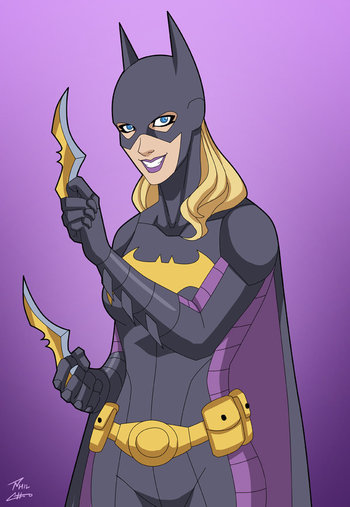 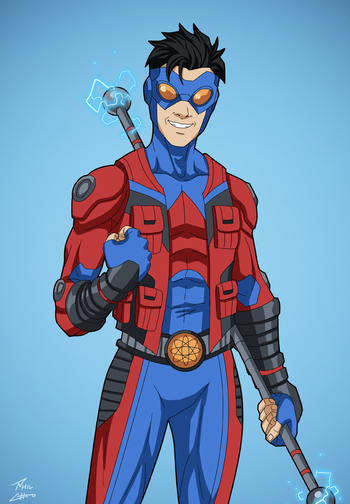 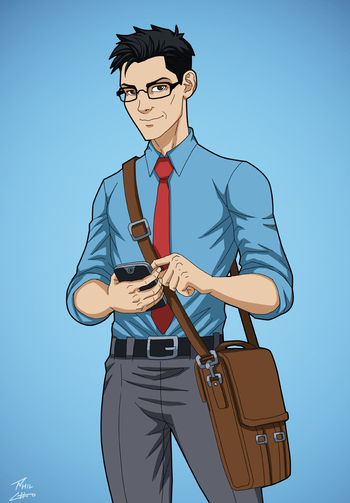 Asian American child prodigy, Ryan Choi is the son of a wealthy Hong Kong businessman and a world-class neurological surgeon. As Micro he's the protege and later partner of The Atom and also partners in crime with his girlfriend Giganta and later began teaching as an assistant professor at Ivy University. Older half-brother of Grace and Eugene Choi. 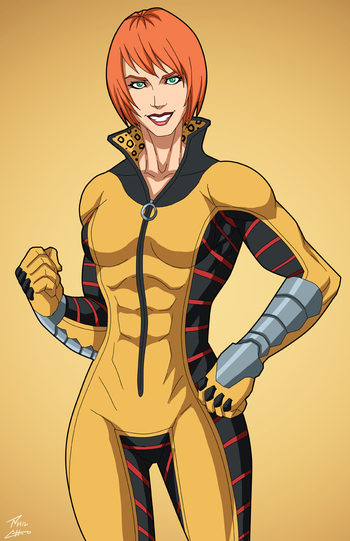 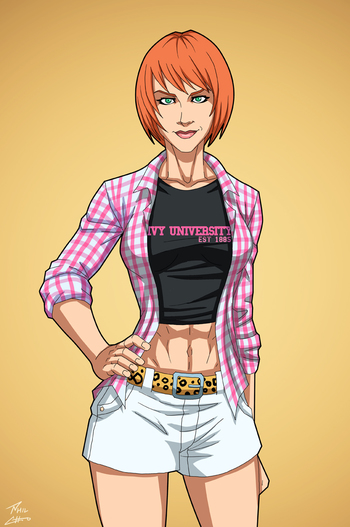 Giganta is Doctor Doris Zeul, a mousy scientist who was diagnosed with a rare blood disease. By the time Doris was a teenager, she was afforded a special scholarship to attend the special adolescent genius program at Ivy University. When Ray Palmer’s Bio-Belt malfunctioned, young geniuses Doris Zeul and Ryan Choi attempted to repair the belt. During their attempt, the Bio-Belt sent out a shockwave which soaked the genes of Doris, Ryan, and Ray.

Doris would then later discover she had the ability to reduce her size back to her original form, but also found that her original form had been altered. No longer was Doris a sickly, frail girl of unimpressive stature, she was a 6’6” tall girl with abs of steel and superstrength. Also, the childhood illness that had affected her for most of her youth was gone. Giganta as alumna of the Titans is also both resident medic and all around powerhouse addition to any team she’s on… as long as said team doesn’t have Wonder Woman in it. 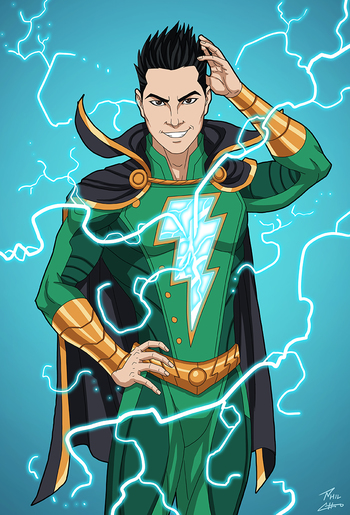 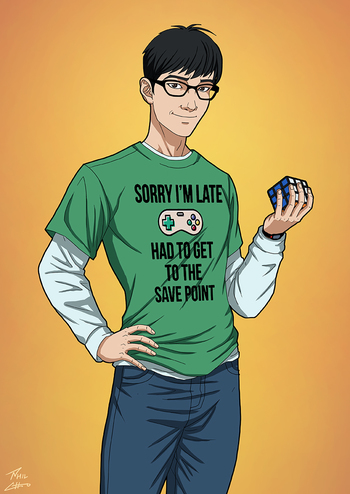 Eugene Choi is the maternal half-brother of Ryan Choi and adopted brother of Grace Choi and also one of Billy's foster siblings. By uttering the name of the wizard Shazam, Eugene is granted the Wisdom of Solomon. As a result, he is Doctor Marvel, with doctor being an academic rank. 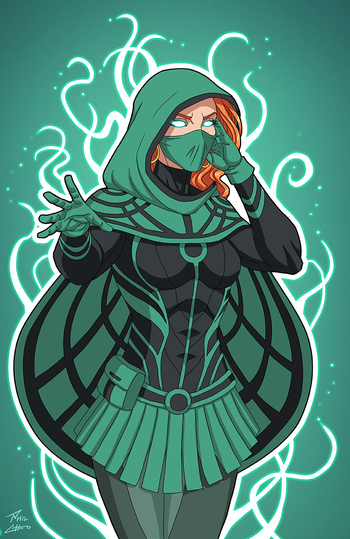 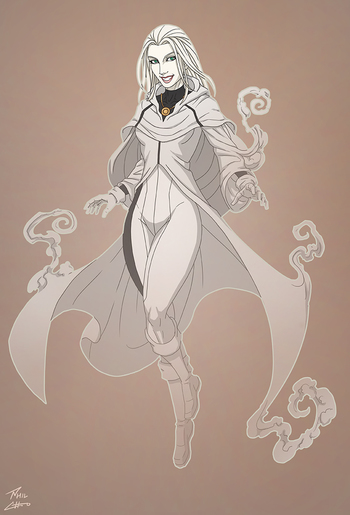 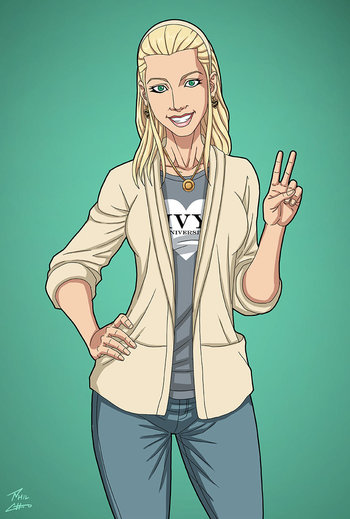 The ghost of a girl murdered in a ritual. Having been killed by her adoptive brother Billy Hayes, she remained stuck on this plane of existence as a ghost. This makes her a gateway between the living and the dead, allowing her abilities including flight, teleportation, shapeshifting, and taking souls to the other side.