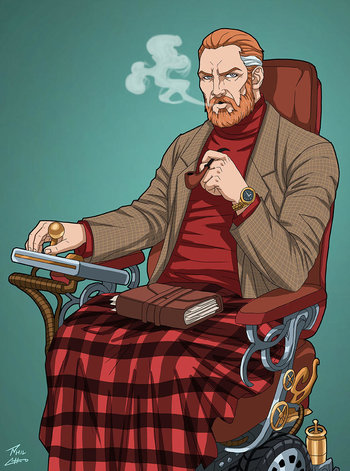 The founder and leader of the Doom Patrol, Niles Caulder is a genius inventor, gifted scientist for STAR Labs and a former FBI agent who's crippled by one of his enemies. 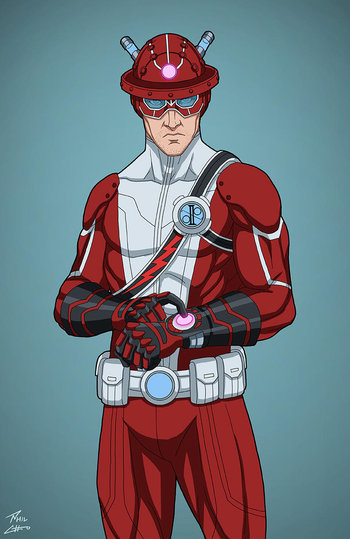 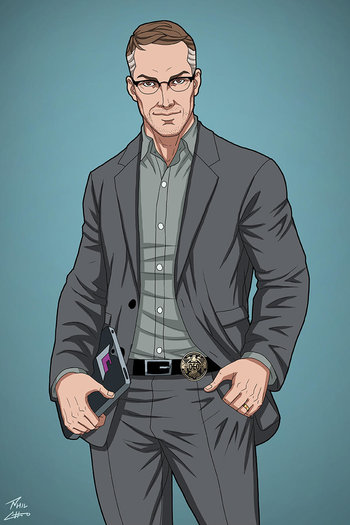 Steve Dayton, one of the world's richest men, built himself a helmet to enhance his mental abilities and calls himself Mento. This is an attempt on Dayton's part to impress Elasti-Girl (a.k.a Rita Farr) of the Doom Patrol. Although his arrogant manner annoys the male field members of the team, he is successful, Mento and Elasti-Girl are married. They soon adopt Beast Boy and both would later have a daughter named Holly. 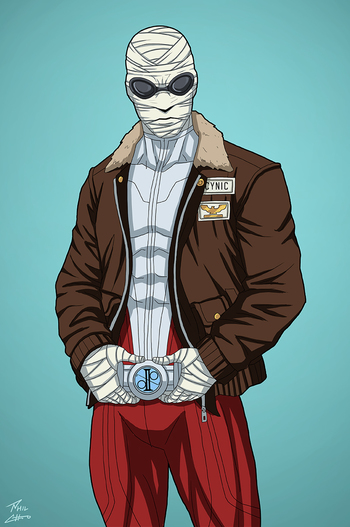 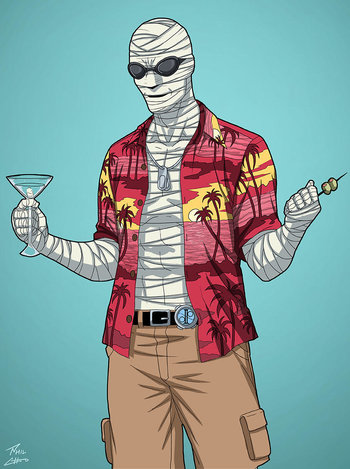 An Air Force pilot whose body was irradiated during a flight, Larry Trainor's body was left severely disfigured and radioactive. He gained the ability to manifest a second body, the Negative Man or Spirit, composed of "negative energy". The cost was leaving him weak and defenceless. He sees his powers as an infection and a curse, yet nevertheless served as a founding member of the Doom Patrol. 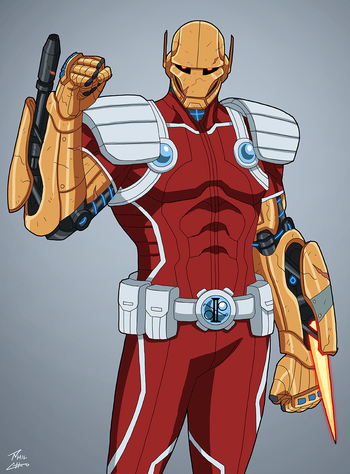 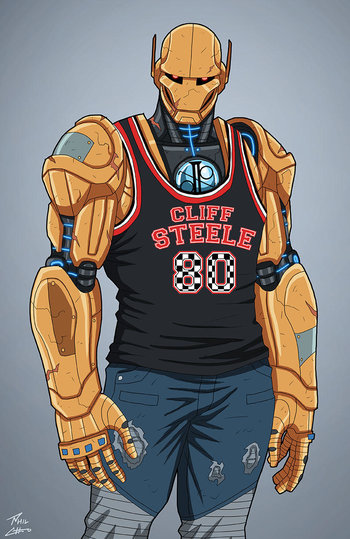 A former race car driver and extreme sports athlete whose body was left ruined after a terrible accident, Cliff Steele's intact brain was implanted into a robotic body by Niles Caulder and became Robotman, and a founding member of the Doom Patrol. 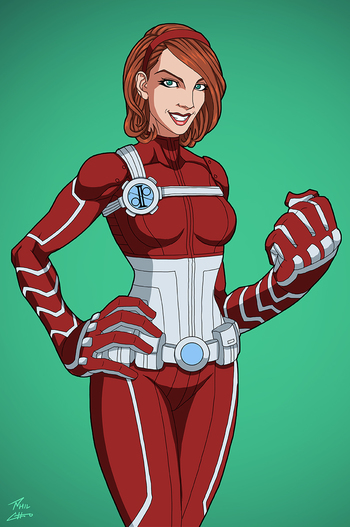 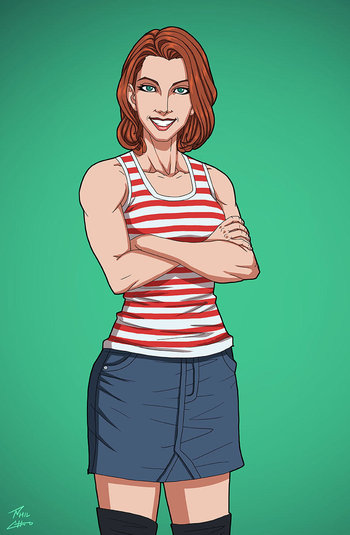 A former actress who gained the power to stretch her body to absurd degrees after exposure to chemicals, and became a founding member of the Doom Patrol. Initially deeply unhappy with her state, she eventually grew used to it. 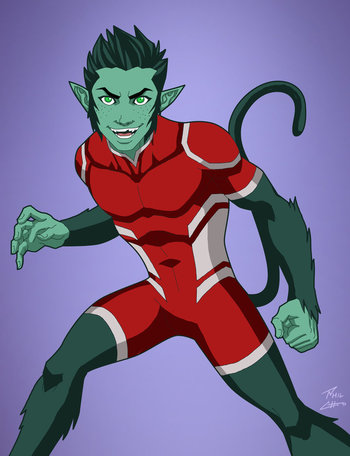 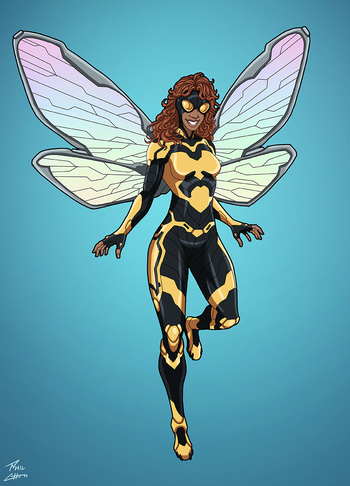 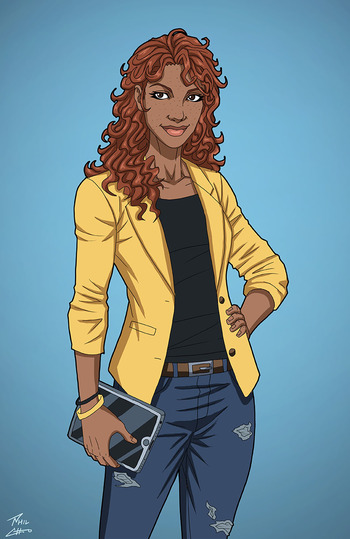 Karen Beecher is a scientist that created a scientific super-suit which gives her superhuman strength and the ability to fly. She was a former member of the Titans and is a member of the Doom Patrol. 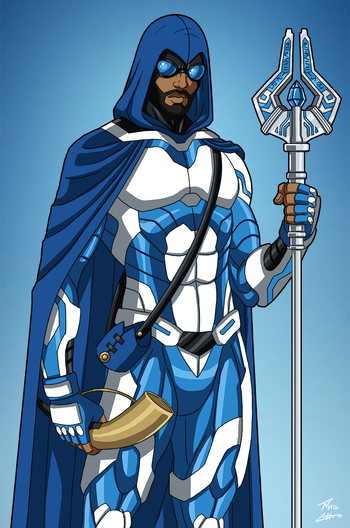 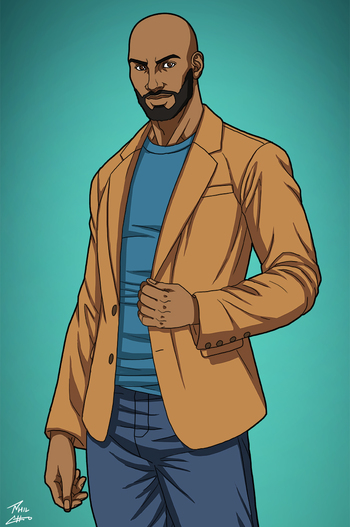 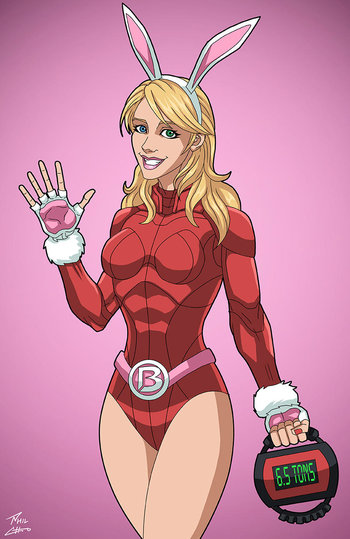 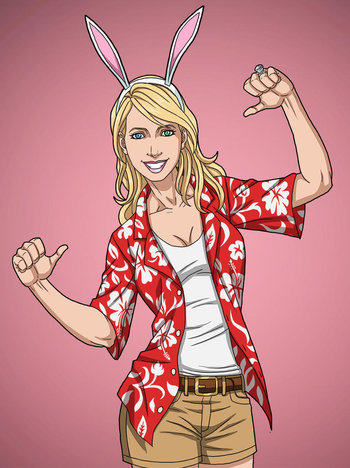 The younger sister of Angel O'Day and cousin of Steve Trevor. A later addition to the Doom Patrol, Tough Bunny is stronger than an ox — and almost as intelligent. She is highly incompetent and heavily relies on her teammates to fight crime. She's also the wife of Irwin Schwab aka Ambush Bug. 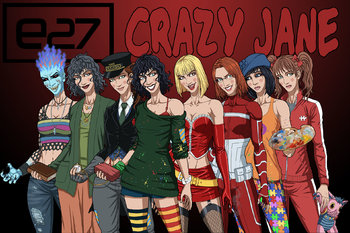 A woman who suffers from multiple personality disorder. As the result of a meta gene bomb, each personality has its own distinct superpower. The personality in charge most of the time is Crazy Jane. 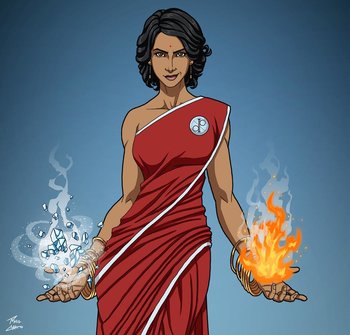 The estranged wife of Niles Caulder. 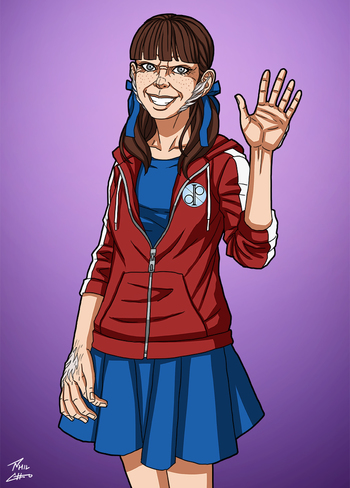 The adopted daughter of Niles Caulder and Arani Desai. 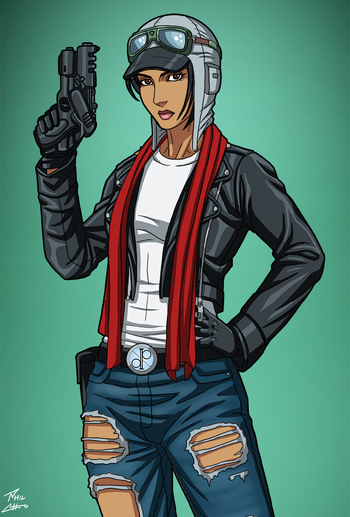 Deborah Ursula "Dusty" Marlow is the pilot and liaison of the Doom Patrol. 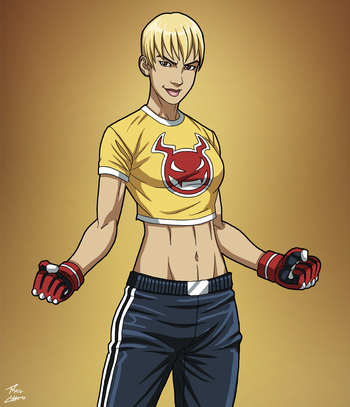 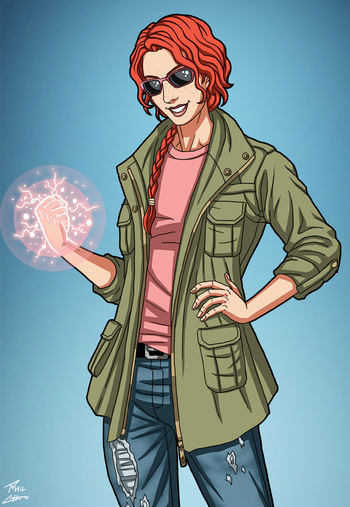 Coagula (Kate Godwin)
Coagula is a member of the Doom Patrol. She has the ability that enables her to dissolve any solid and coagulate liquids by touching them.
Grunt The Gorilla
Grunt is a four armed ape, who is not very smart and very impulsive.
Nudge (Mi-Sun Kwon)
Nudge can will people to do as she says, but only if her willpower is stronger than her target's.
Doodle Bug (Casey Brinke) 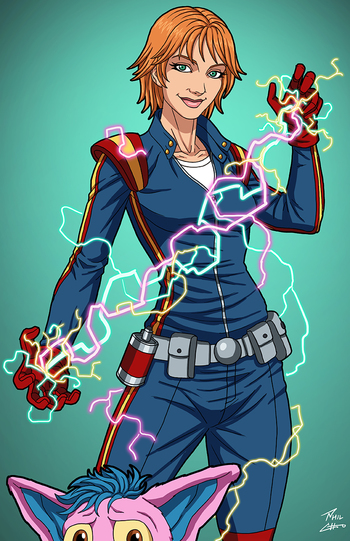 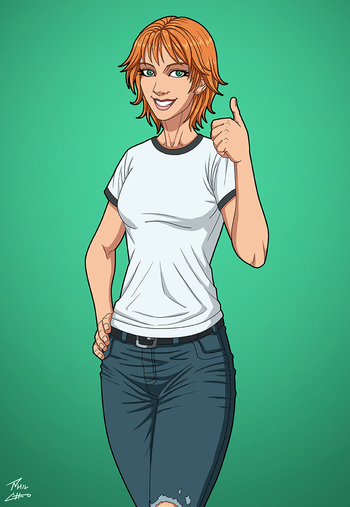 Introduced as an unassuming ambulance driver who just happens to be a Weirdness Magnet, she's actually a comic book character created by Danny to entertain his patrons. She somehow was given life and escaped, but still remembers her adventures as a comic character. 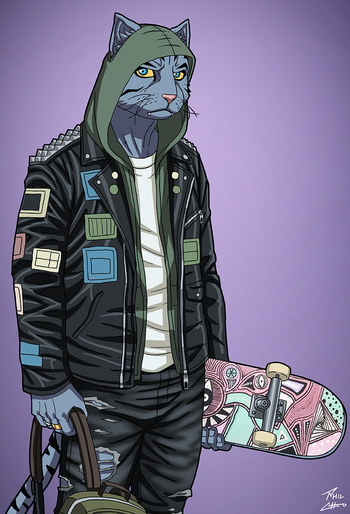 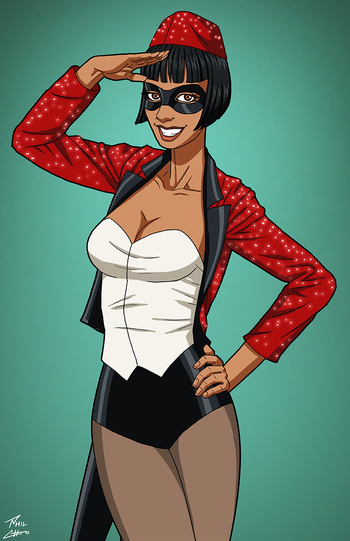 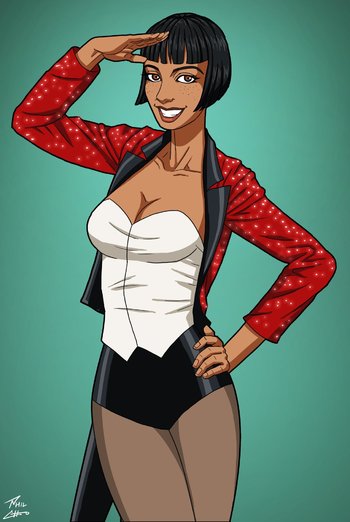 Daughter of Mr. Nobody and roommate of Casey Brinke, as well as her friend and lover. 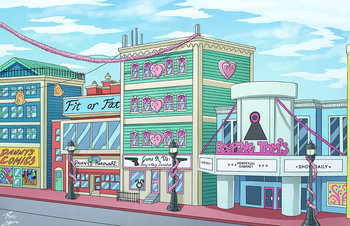 A sentient street who travels between cities, can generate matter and teleport, seamlessly integrating himself into existing cities. He serves as the Doom Patrol, Fables and the Legends' headquarters. 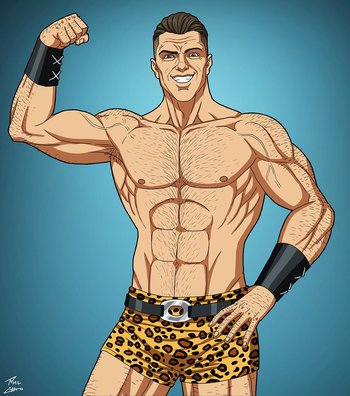 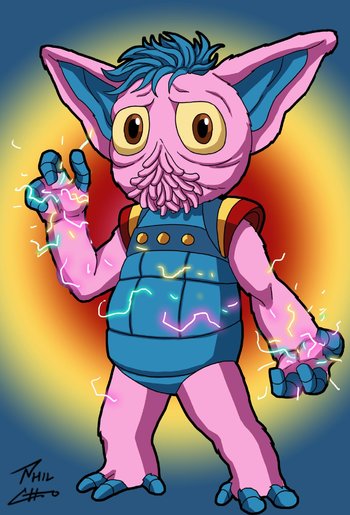 Fugg is a furry creature created by Danny the Street to accompany Casey Brinke. Fugg, who can only say the word "Fugg", has an organic tape player in his stomach that allows him to play instructional tapes for Casey.