Appeared in Lament of Innocence 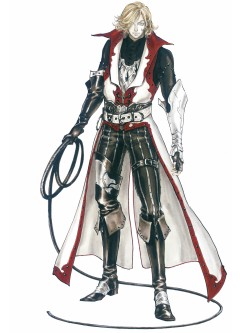 A near-invincible knight active during the medieval era, and along with Mathias Cronqvist, formed an invincible team. He abandoned his position when his betrothed Sara Trantoul was kidnapped (according to Mathias) by the vampire Walter Bernhard. Leon discards his sword and takes up the Whip of Alchemy from Rinaldo Gandolfi, and storms Walter's castle, only to find Sara in process of being vampirized. The only way to save her is to kill her. Leon does the job, changing the Whip of Alchemy into the legendary Vampire Killer.

Leon swears to kill Walter and the night. He almost succeeds, only to see Walter get backstabbed by Death, and Mathias reveal himself as the Magnificent Bastard behind the scenes. Leon refuses Mathias' offer to join him, survives a battle with Death, and swears that his family will always exist to oppose Mathias.

"We all decide our own fate. It was you who taught me that, Alucard."

A woman who was gifted with strange magical power. When her land is ravaged by Dracula, she takes up the Vampire Killer whip and invades Dracula's castle, encountering her friend Alucard along the way. After her ordeal is over, she settles down and has a child, Trevor.

She was slated to appear again in Castlevania Resurrection, but the game's cancellation prevented that. On top of that, when IGA took over the series, he retconned Sonia from the Castlevania timeline entirely.

"I am Trevor Belmont of the House of Belmont, and dying has never frightened me." 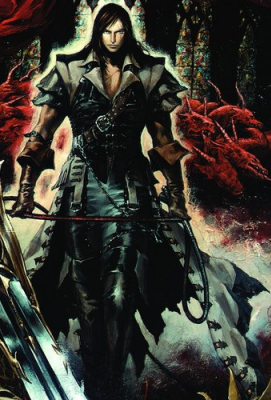 Leon's descendant (with or without Sonia) and the first Belmont to succeed in killing Dracula. When Trevor was young, he went into exile as the people feared the Belmont Clan's powers. But when Dracula strikes, Trevor takes up the Vampire Killer whip that was passed down through his ancestors, and travels around Wallachia to save the land and win the people's trust. It works, and the Belmonts are no longer feared. He also gets to marry one of his allies, Sypha Belnades.

He gets to reappear in Curse of Darkness as an uneasy ally for Hector. He ends up getting wounded by Isaac, but survives the overall ordeal. Unfortunately, he loses his headband in the process.

Appeared in The Adventure / Belmont's Revenge

Christopher Belmont
"Now you will lead us to Dracula and Illya, old man, or—" 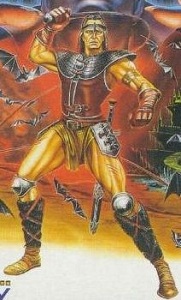 A Belmont descendant that takes on Dracula when he revives... that's all his story is about in Adventure. In Belmont's Revenge, his story was fleshed out a bit with the birth of his son Soleiyu, who was about to inherit the Vampire Killer until Dracula possessed him. Chris jumps back into action to save his son and succeeds. There is a remake of Adventure, which seems to be rather different in content. 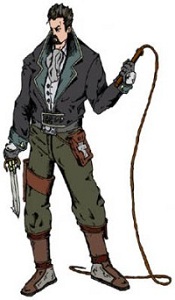 Although Victor was born in the 1800s, the Powers That Be pulled him to the year 1666 to assist Sonia Belmont in destroying Dracula. When he was young, he decided that he wanted no part of the Belmont family's job as vampire hunters, and ran away from home. As he grew older, he took up gambling and also learned of the arts of warfare. One night in the 19th century, he got in a fight with another man when gambling. As Victor pulled out a knife, he was suddenly transported to the year 1666 by mysterious forces.

Victor was going to be one of the protagonists of Castlevania: Resurrection, along with Sonia Belmont, but the game was unfortunately canceled. 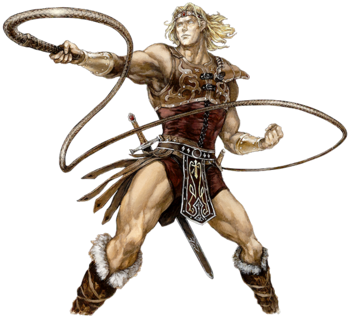 "On my honor as a Belmont, I will destroy you."

The very first Belmont in the series, and by far the most well-known and popular of them all. At first, Simon's purpose is simple: Fulfill his family's legacy by entering Dracula's castle and defeating him. He did so. But, Dracula, in his dying breath, gave him a curse that would slowly kill him. He didn't count on Simon's badass qualities, though, so despite being cursed, Simon travels around Transylvania and collects Dracula's body parts so he can revive and destroy him, ending the curse.

He also gets to appear in Captain N, but he's a completely different character; a bumbling Jerk with a Heart of Gold instead of the straightforward hero he usually is in the games.

Appeared in Harmony of Dissonance

"I told you so. Do not underestimate the power of my bloodline!!" 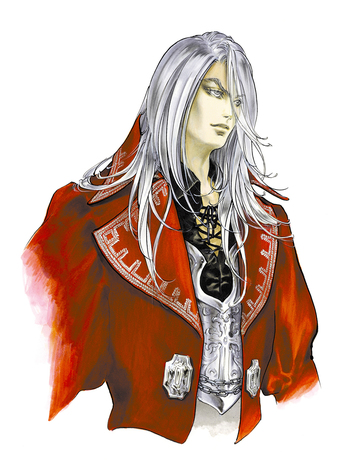 Simon's grandson, a prodigious warrior who inherits the Vampire Killer in his mere teens. Juste is unique in that he has a lot of the Belnades blood in him, making him a Magic Knight. For some reason, he likes decorating rooms. He is best buds with swordsman Maxim Kischine and is the lover of Lydie Erlanger. At one point, Lydie vanishes, Dracula's castle rises, and Maxim leads him there (acting a bit strange in the meantime). Juste investigates the castle, finding out that Maxim is being possessed, and ends up repeating Simon's feat of gathering Dracula's parts and reviving him only to destroy him again. Juste saves Lydie and Maxim, and it's all good.

Appeared in Rondo of Blood / Dracula X / Symphony of the Night 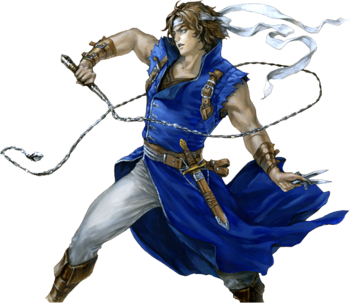 "Die, monster! You don’t belong in this world!"

One of the more infamous Belmonts (thanks to Symphony of the Night) and probably Juste's son or at least his grandson. Richter has a girlfriend named Annette, until Dracula suddenly takes an active stance and assaults his home, kidnapping Annette, Maria, and several other women. Richter heads to the castle, saves the maidens, confronts Dracula, and kicks his ass.

Four years later, due to a plan by the dark priest Shaft, Richter gets possessed and raises Dracula's castle, acting as its master. He's freed by Alucard, and leaves the rest to him. Since the release of Portrait of Ruin, he is canonically the last full-blooded Belmont to wield the Vampire Killer until Julius Belmont in 1999.

"This is not the anger of a vampire killer. This is the rage of all humanity!" 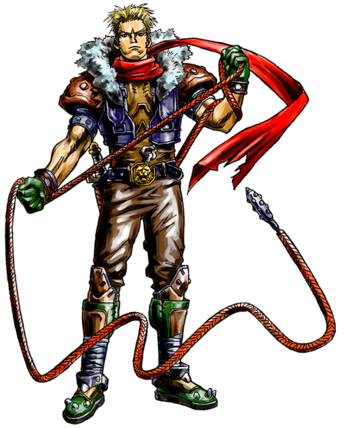 Though carrying a different name, he is a Belmont by blood and recognized as such by Death itself, who only addresses him as 'Belmont'. He's inherited the Vampire Killer whip as well as the duty of destroying Dracula whenever he arises. He was raised in the ways of the church and abhors attacking women and children, a trait that comes into question when he comes across a female vampire named Rosa in the abbey grounds. Even after her demise at the hands of Death, he remains resolute, successfully destroying Dracula's new incarnation and proving that even the damned are worthy of forgiveness.

Appeared in Aria of Sorrow / Dawn of Sorrow

"Farewell, my friend. Don't let me use that whip again." 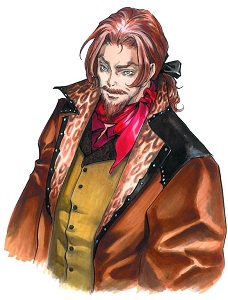 The next Belmont after Richter to wield the Vampire Killer. There was a prophecy that it wouldn't be wielded by the Belmonts again until a great battle in 1999, and when that magic time rolled around, Julius was the lucky one to be on Dracula duty. Julius has the honor of being the one who beat Dracula for good, sealing Castlevania in an eclipse (thereby denying Dracula's soul access to the stone that was keeping it out of the cycle of reincarnation long enough to resurrect), but the battle cost him his memory, and he lived as an amnesiac for over thirty years under the name "J".

Since the name "Dracula" filled him with dread for reasons he couldn't explain, he headed to Castlevania during its return at the solar eclipse to hopefully restore his memory. He meets up with Soma, and is eventually asked to kill him should Soma ever fall to The Dark Side.

Julius reappears to assist Soma in Dawn of Sorrow, and is the one to put him out of his misery in the bad ending of both games. In Otomedius Excellent, Kokoro Belmont is apparently his (non-canonical) little sister.

Appeared in The Battle of Old Castle 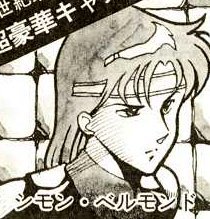 An actor descended from his namesake.

Appeared in The Legend of Satanic Castle: The Vampire Hunters 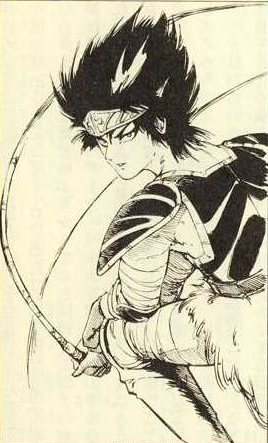 A descendant of Trevor Belmont.