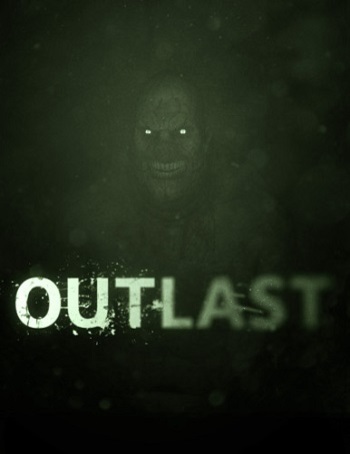 This time, being afraid of the dark is not irrational. Be prepared — to run. Hide. Or die.
God help me, I think I've seen the Walrider.
— Entry in the journal of Miles Upshur
Advertisement:

Outlast is a Survival Horror game released for Steam on September 4, 2013 with a version for the PlayStation 4 released on February 5, 2014, and an Xbox One version released on June 26, 2014.

You control independent journalist Miles Upshur, who breaks into Mount Massive Asylum for the Criminally Insane, which had been recently reopened by the transnational Murkoff Corporation, after receiving information from an inside source. Expecting a controversial scoop, Miles soon finds himself inside a horrible nightmare he could never imagine.

The gameplay largely revolves around Miles being a Non-Action Guy, with no combat options aside the ability to parkour his way over obstacles, hide in lockers and under beds, and cut off pursuers amongst the decrepit hallways of the facility. As an added mechanic, he has a camcorder with a Night-Vision Goggles mode, which is useful in the asylum's many pitch-black sections but requires batteries to operate.

An expansion pack, Whistleblower, was released on April 6, 2014. It follows Waylon Park, the inside source that tells Miles about Mount Massive, and takes place during the takeover of the asylum and after the events of the main game. Like Upshur, Park isn't physically equipped to handle the inmates and must run and hide while using a camcorder to see in the dark.

open/close all folders
Outlast
Whistleblower DLC
You made the right choice here, buddy.