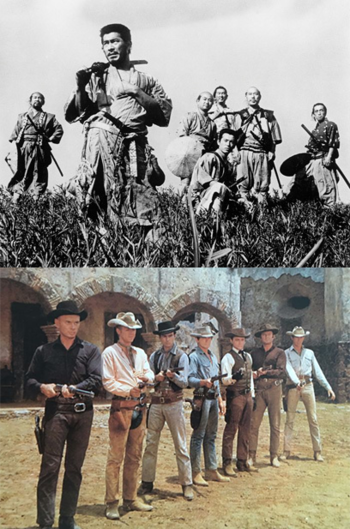 The trope title and namers are Seven Samurai (Shichinin no samurai) and The Magnificent Seven, the latter of which is famous for both transferring the Kurosawa classic to the Old West (with Kurosawa's blessing) and being a classic in its own right. (A trivial note: Seven Samurai was originally released in the USA as The Magnificent Seven; the English title was changed to a direct translation of the Japanese title later to avoid confusion with the remake.) Nevertheless, this trope is Older Than Feudalism, going as far back as Aeschylus's play Seven Against Thebes. The actual Trope Codifiers within Japan itself are probably the Eight Dog Warriors of Hakkenden (who were in turn inspired by the 108 heroes of Water Margin).