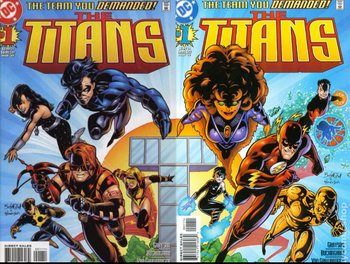 Titans, Together!
Titans was an ongoing comic that lasted from 1999 to 2003, which covered the immediate aftermath of JLA/Titans: The Technis Imperative. With Young Justice, established six months earlier, serving as a Spiritual Successor to the original Teen Titans team, Titans served as a more direct one, catching up with five of the original Teen Titans: Dick Grayson, Roy Harper, Donna Troy, Garth, and Wally West. The group decided to reform the team, with each of them choosing another member to augment the team in their absence: Dick chose Starfire, Roy chose Damage, Donna chose Argent, Wally chose Jesse Quick, and Garth chose Cyborg.
Advertisement:

In Rebirth, Dick, Roy, Donna, Wally, and Garth (along with other classic Teen Titans) team up again in Titans (Rebirth).