An outgoing orphaned girl trying to survive in Alba City doing multiple (and short-lived) part-time jobs. She meets with Tuesday when playing keyboards in the streets.

The daughter of a rich family (her mother is a famous politician) who ran away from home in the hope of becoming a musician in Alba City. Unlike Carole, she's rather timid and clumsy. She plays an acoustic guitar she calls Hummingbird.

A successful model who decides to take up singing to add more to her fame.

A man struggling in the music business who used to manage a couple of musicians. He immediately goes to Carole and Tuesday after watching a viral video of their performance of "Loneliest Girl", making himself their manager in hopes of helping them become big.

An acquaintance of Gus. His video recording of Carole and Tuesday's performance of "Loneliest Girl" goes viral after he uploads it. Afterward he joins Gus in helping Carole and Tuesday become professional musicians.

Angela's parent and agent. Has been pushing their daughter in their career since she was a child.

A successful music producer. He helps kick-off Angela's music career by writing her songs with his A.I.

Tuesday's older brother. He helps his mother out with her presidential campaign.

A presidential candidate for Mars, and also Spencer and Tuesday's mother.

Angela's new manager. She used to be a huge fan of hers.

An... odd old man, who turns out to be the famous music producer Tobe. He helps Carole and Tuesday out per Gus' request, albeit via Training from Hell.

A reporter who's following the presidential campaign. Since he's following Valerie Simmons specifically, he also takes an interest in Tuesday.

An IT guy who helps out Angela set up security for her house amongst other things.

Someone who starts leaving unsettling messages on Angela's social media after she debuts as a singer.

A famous DJ who Roddy works for. He later guest stars on Mars' Brightest to judge, which is unfortunate for Carole and Tuesday due to the... rough first meeting they have with him beforehand.

A musician Carole and Tuesday meet at the Cydonia Festival.

A troublesome musician who Carole and Tuesday are asked to ("potentially") cover at the Cydonia Festival in case his erratic behaviour leaves him unable to perform.

A legendary musician who stopped appearing in public at one point.

A former singing star who was discovered by Gus before signing a contract with a big label and cutting ties with him. Gus, Carole and Tuesday find her 20 years later, homeless and broken.

Famous rapper and childhood friend of Carole, back when they lived on Earth.

The head judge for Mars' Brightest.

A judge for Mars' Brightest.

An A.I and judge of Mars' Brightest.

A social media star and contestant for Mars' Brighest.

A contestant for Mars' Brightest who takes an immediate liking to Tuesday. 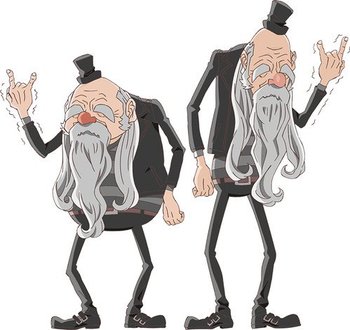 99-year-old twins and the oldest contestants in the history of Mars' Brightest.

A contestant for Mars' Brightest, and Carole and Tuesday's first opponent.

A group of siblings and contestants of Mars' Brightest.

A whimsical contestant on Mars' Brightest.