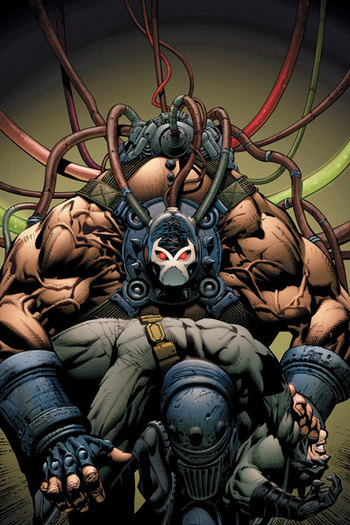 "I could kill you... but death would only end your agony — and silence your shame! So instead, I will simply... BREAK YOU!"
Click here to see his "Classic" design 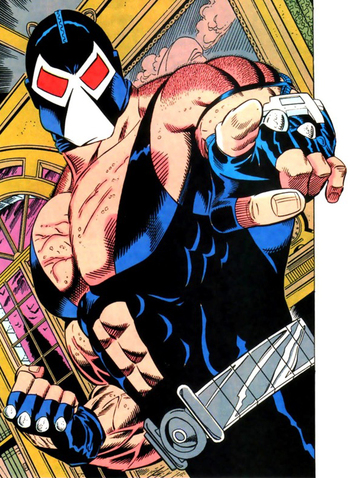 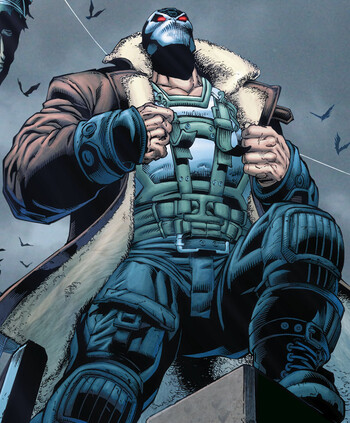 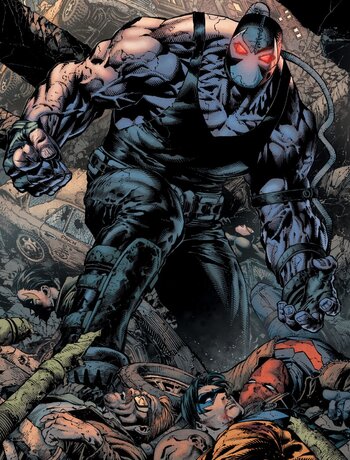 Alter Ego: The Man Who Broke the Bat, Ubu

Bane never had it easy. He was sentenced to life in the prison Peña Dura before he was even born, due to the corrupt government of his home country, Santa Prisca, punishing him for the crimes of his father. From early childhood, he was tormented of visions of a bat in his sleep. He developed his knowledge and skills in prison, learning how to defend himself, gaining a Classical education from a Jesuit priest, and mastering several languages. He slowly climbed up the social ladder of the prison, even committing his first murder at age eight, until becoming "king" of Peña Dura.

The people in charge noticed this and forced him to be the test subject for an experimental Super Serum, Venomnote no, not that Venom. The drug, which had killed every subject before him nearly destroyed him too, but he survived and discovered that the drug also increased his strength vastly at the cost of being highly addictive and dangerous to stop using.

He eventually escaped the prison with several others and set out for Gotham City because, like Peña Dura, it too was ruled by fear: the fear of The Batman, who Bane is convinced is the demonic bat from his nightmares.

Bane became one of many of Batman's enemies, but he was best known for snapping Batman's spine during the events of Knightfall. Despite being a relatively recent addition to the Dark Knight's rogues, Bane quickly shot up to the A-List of Gotham's criminals and became one of Batman's most prominent foes ever since.

Bane was originally created in order to replace Bruce Wayne with a different character in the role of Batman, Azrael. This was all in an attempt to make Nineties Anti-Heroes less popular, and it worked.

He later weaned himself off the drugs and become something of an Anti-Hero himself, and was a member of the Secret Six until their dissolution shortly before the New 52 initiative. In the New 52, he seemingly never underwent any of his character development, but did break Batman's back.

He has made appearances in many different DC adaptations, including Batman: The Animated Series, The Dark Knight Rises (played by Tom Hardy), and Young Justice. His video game appearances include the Batman: Arkham series, LEGO: Batman and Batman: The Enemy Within.