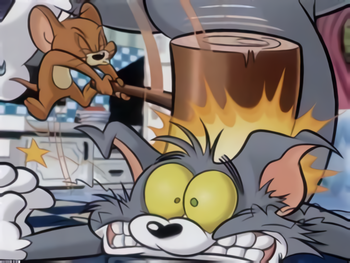 He's also known for being buffoonish.
Vision: It's funny because of the grievous injuries that man just suffered?
Wanda: No—he's not really injured.
Vision: Ah. How can you be certain?
Wanda: It's not that kind of show.
— WandaVision (while watching Malcolm in the Middle)
Advertisement:

Injuries in classic cartoons and slapstick comedies never have any lasting effects, are only painful for a short while, and are often a source of visual humor. Occasionally, you will see a character in traction or on crutches or sporting Instant Bandages; however, this is strictly for punctuating a gag or putting a cap on an episode, and will never last more than 10 seconds. Gunshots and explosives in particular can lead to Amusing Injuries; what would normally destroy a large chunk of someone's face in real life often does little more than blow soot all over a cartoon character. Guns in these shows often inexplicably emit directed explosions to the face rather than firing bullets.

This can lead to very jarring circumstances within a show. Like say when the plot of an episode rides on a character getting injured and taken out of an event, or when there's a character who's a physician of all things, or in the rare event that the amusing injury actually does cause a major gruesome injury, or a permanent death actually occurs. It'll be treated at least somewhat seriously in that particular instance, but next thing you know it, they're back to jumping off cliffs and juggling chainsaws. ...Or trying to see if they can do both at the same time.

Sometimes, it can also involve a huge Double Standard. A male character will often suffer them at the hands of a female, who can punch/kick/beat/attack him as much as she wants and it'll be often taken as mere comedy. Try imagining the same situation with a Gender Flip... yeah, people will be up in arms. See Double Standard: Abuse, Female on Male.

Amusing Injuries are usually healed via Negative Continuity. A character who is constantly suffering them is often an Iron Butt Monkey. A common variety is The Pratfall. Can overlap with Groin Attack (possibly with Instant Soprano) and Ass Shove. Required for Hyperspace Mallet and Megaton Punch. Extremely common in a Plank Gag. Cranial Eruption is a subtrope. Compare with Inconvenient Itch. Contrast Bloody Hilarious, for when serious injuries are Played for Laughs, and This Index is a Real Pain.

Somewhat subverted, however...
Harry: (complete with eyes sewn shut) But the pain will be more than real...