Character page for the Player Character of Fallout 3 and their companions. Some spoilers may be unmarked. 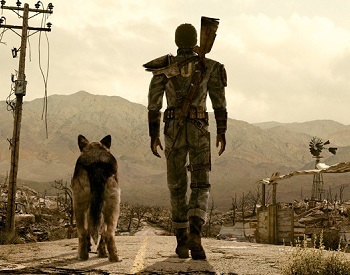 You want the one on the right.
"The kid from Vault 101, aka the Wanderer, aka That Crazy Sonnuvabitch..."
—Three Dog

The Lone Wanderer lived happily in Vault 101 for the first 19 years of his/her life before his/her beloved father escaped, leaving The Wanderer alone and with the overzealous Overseer's men after them. Marked for death and needing answers, the Wanderer flees the Vault, thrust into the harshness of the outside world with no experience and little more than a handful of Vault security equipment and supplies. The search begins to find Dad and why he left the Vault, sparking a quest along the path to greatness. 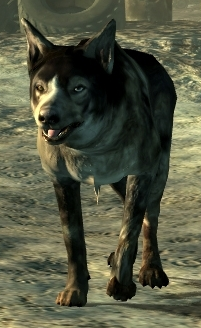 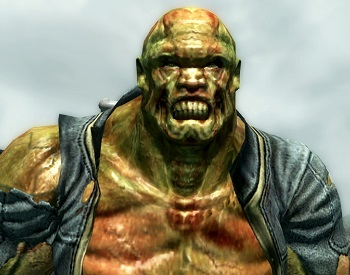 Voiced by: Wes Johnson (English), Andrey Yaroslavtsev (Russian)
"In all things, a calm heart must prevail."

Formerly a security guard living in Vault 87, Fawkes was one day chosen for an experiment involving FEV, which turned him into a super mutant. Unlike his brethren, Fawkes retained his intelligence through the transformation. This caused the other Super Mutants to shun him, and when the player first meets him he's locked up in a cell in Vault 87. He carries a Gatling Laser and can only be obtained with Good Karma. 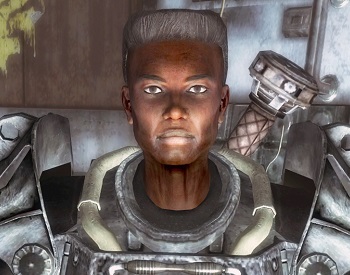 Voiced by: Shari Elliker (English), Nina Gogaev (Russian)
"A Brother well-equipped is a brother keeping to his duty."

The highest ranking Paladin of the Brotherhood of Steel, Cross is Elder Lyon's adviser and bodyguard. She was injured in the field years ago, and given cybernetic implants to save her life. She can be a follower to a player with Good Karma. 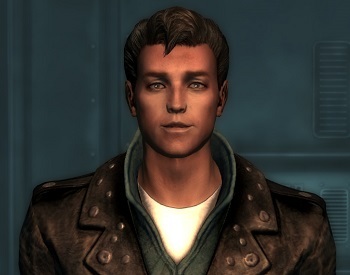 Voiced by: Craig Sechler (English), Alexander Morozov (Russian)
"I could be out there and kicking butt in my own gang and everything. The Tunnel Snakes could ride again! Or, y'know, slither again. Whatever!"

Formerly a bully at Vault 101, Butch has grown into a man tired of living in the Vault and aching for some freedom. If the player has the Vault opened in the Trouble On The Homefront quest, he can be found in Rivet City and can be recruited with Neutral Karma. He has weak default weapons, a 10mm Pistol and his Switchblade Knife. 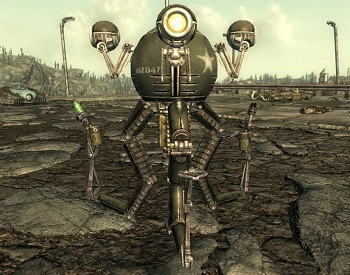 Voiced by: Jeff Baker (English), Vladimir Antonik (Russian)
"There's nothing I like better than making some other poor bastard die for his country."

A pre-war Mr. Gutsy type military robot armed with a plasma weapon and a flamethrower, RL-3, like many robots, is still running on his fission battery and survived the nuclear war. However, he is not instantly hostile, and as a result was acquired and fixed up by a trader named Tinkerer Joe, who is currently selling RL-3 for 1,000 caps (500 with a speech check). However, RL-3 has his own programmed personality, and will only join people who are not too "extreme" (which means you can only buy him with Neutral Karma). 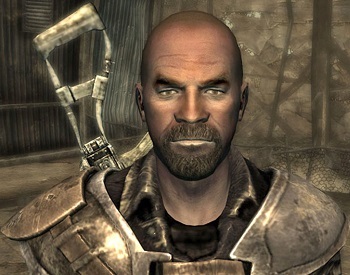 Voiced by: James Lewis (English), Oleg Belov (Russian)
"Say what's on your mind then get out of my face."

A former Raider currently living in Megaton, Jericho has decided to leave his life of stealing and killing behind him. He just lounges around Megaton all day, sleeping in his one room shack or getting drunk at Moriarty's bar, but can be recruited by a player with Evil Karma. He carries a Chinese Assault Rifle and a nailboard. 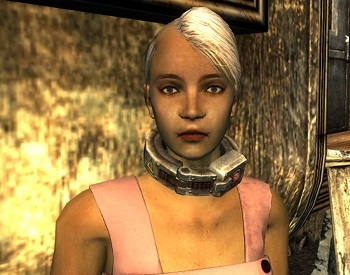 Voiced by: Jan Johns (English), Elena Solodinin (Russian)
"Can I do something for you? Or... to you?"

Eulogy Jones' personal bodyguard/sex slave, she is utterly devoted to her master. She can only be initially purchased by an Evil Karma player, but can then later be re-hired regardless of Karma. 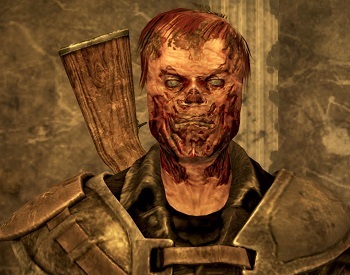 Voiced by: Mike Rosson (English), Oleg Shcherbinin (Russian)
"You are my employer and I will do as you command."

A ghoul with a mysterious past, Charon was apparently brainwashed in his childhood to blindly follow whoever holds his contract. He is currently a bouncer in an Underworld bar called the The Ninth Circle, where his contract can be purchased from its current owner, Ahzrukhal, or obtained from him by killing off his competition on the alcohol business.