Deputy Weld: "Welcome to Megaton. The bomb is perfectly safe. We promise."

Megaton is one of the more stable settlements around, with about thirty people, a sheriff, a water purifier, scavenging teams, and a wall to keep Raiders out. However, there is the little problem of an unexploded atomic bomb in the middle of the town, but hey, it keeps those nuts at the Church of the Children of Atom occupied, so how bad can it be? When the Lone Wanderer arrives, Megaton's fate can be decided. However, both New Vegas and 4 reveal that that canonically, Megaton survived the events of Fallout 3 and has greatly expanded in influence as both one of the most populous cities in the Capital Wasteland and the origin of the Wasteland Survival Guide. 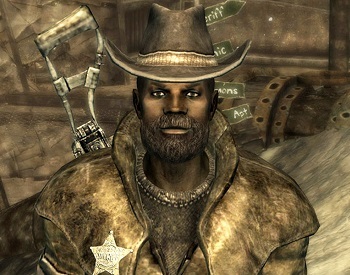 Voiced by: Gregory L. Williams
"This here is my town. These are my people. You so much as breathe wrong, and I'm gonna fuckin' end ya."

The de-facto Sheriff (and mayor) of Megaton, and likely the first person the Lone Wanderer meets on the surface. He's loved by the people and is reasonable and fair, but he protects the town with great ferocity and will not hesitate to pull his gun on anyone who threatens the peace.

"How the hell did you get up here, anyway?"

A sniper who keeps watch over Megaton from his vantage point over the front gate. That's about all there is to him. 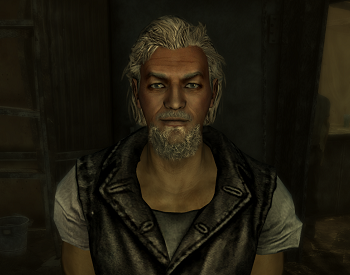 Voiced by: Mike Rosson
"My saloon, my home, my little slice of heaven in this backwoods little burg."

The owner of Moriarty's Saloon. Moriarity came to the Capital Wasteland from Ireland with his father as a child, and has been cooking up schemes ever since. He's got a lot of connections, and has a lot of people who owe him a lot of money. Lucas Simms may be the mayor of Megaton, but Moriarty is the one aiming to have complete control over the citizens. 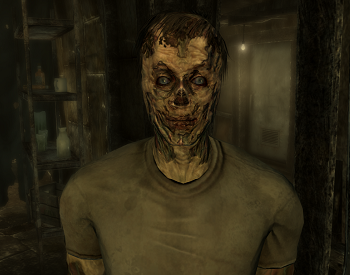 Voiced by: Mike Rosson
"I'm used to every asshole smoothskin in this town giving me shit 'cause I look like a corpse."

An unfortunate ghoul who came to Megaton from Underworld seeking adventure. He ended up as Moriarty's worker (basically a slave) to pay off a debt he owed, which Moriarty unfairly increases by charging him for trivial things like simply living there. 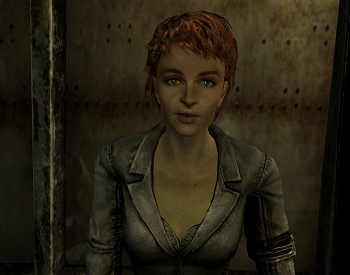 Voiced by: Karen Carbone
"Ohhh. You like it rough, huh? Well, that costs extra."

The town prostitute. Working for Moriarty (under duress), she clearly hates the guy like everyone else in town, but otherwise is rather decently regarded by everyone else. 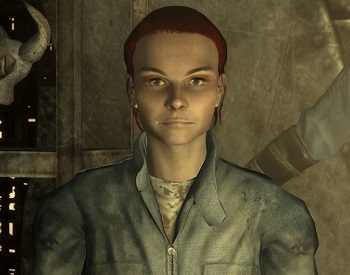 Voiced by: Karen Carbone
"Good luck with that research!"

The owner of the Craterside Supply, the general store in Megaton. She's weird. The Lone Wanderer can help her fulfill her life's dream of authoring the definitive book on how to survive the wasteland. Conversely, the Wanderer can rip her off, hiding out in the saloon all day, then coming back to give her idiotic and dangerous advice. 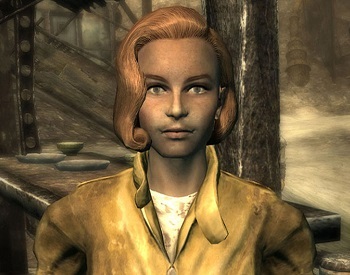 One of the owners of The Brass Lantern and Moriarty's only business competitor. 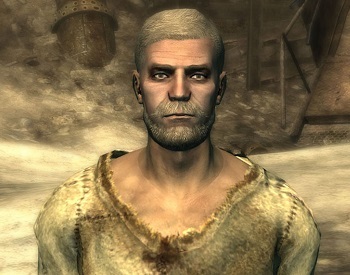 Voiced by: Peter Gil
"We seek creation and unification in Atom's glow."

An old (and possibly senile or insane) man who spends his entire day standing in a puddle of irradiated water next to an undetonated atomic bomb. He preaches about the "Children Of Atom", a bizarre religion that believes individual atoms contain entire universes, and thus nuclear destruction is not destruction, but a ritualistic purification and creation of new existences. 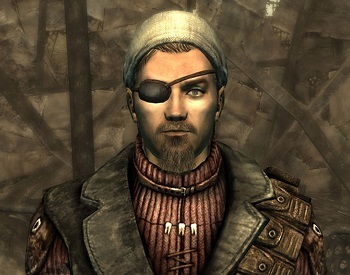 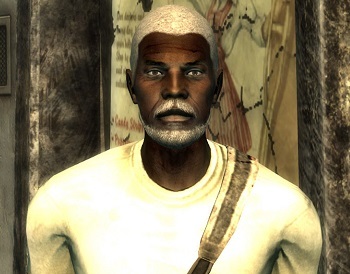 Voiced by: Gregory Gorton
"You'd best have cancer because from the looks of you, you're breaking rule number one right now."

A cranky old man who serves as Megaton's best (and only) doctor. Most players have a strong love/hate relationship with him, they hate his guts and annoying comments but love his stimpaks and medicine. The fact that he is one of the only easily accessible medics for the early parts of the game is a good enough reason to keep him around, otherwise he'd likely end up face down in the irradiated water surrounding Megaton's warhead next to Cromwell after his first introduction.