Characters / Call Of Duty Zombies Victis And Other Playable Characters

As a whole
The main cast of Black Ops II, referred to as "Victis". After the blast from the missiles hitting Earth and reducing it to a zombie wasteland, these four come to band together against the undead. These four seem to get along a bit better than the original four did, but they come into contact with both Richtofen and Maxis. As they grow to depend on each other, they must make their choice between the two otherworldly rivals, their actions determining the fate of the world and humanity. They are also the main protagonists in the Call of Duty: Zombies comic. 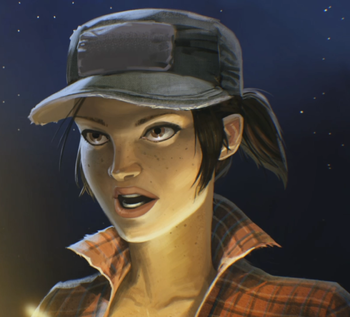 We keep moving, we keep fighting. It's what we do, day in, day out. If you really need a reason why we do this, I'll give you one. We do it because doing something—anything, is a whole lot better than doing nothing!
Voiced by: Stephanie Lemelin
Appearances: TranZit | Die Rise | Buried | Blood of the Dead | Tag der Toten

An abrasive young woman who has a crush on Marlton, likes Russman and will grudgingly get along with Samuel. 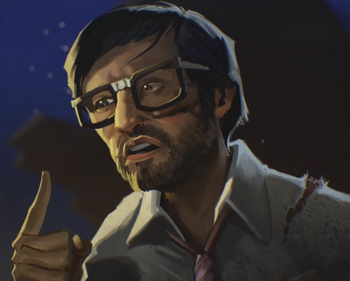 A self-loving nerd, who was present at Nuketown when the missiles hit. Afterwards, he met up with Misty, who he ended up developing feelings for, and later Russman and Samuel, the both of whom he shares a mutual hatred. 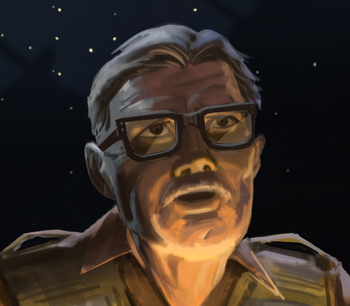 I'm the only one who knows what to do!
Voiced by: Dave Boat
Appearances: TranZit | Die Rise | Buried | Blood of the Dead | Classified | Tag der Toten

A paranoid conspiracy theorist, who's the only one who can hear Richtofen's voice in his head. He's friends with Russman, grudgingly gets along with Misty, and like Russman, shares a mutual hatred with Marlton. 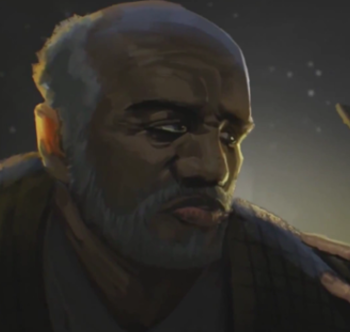 An elderly survivor suffering from Alzheimer's, who was a homeless man before the missiles hit. He's good friends with Samuel and Misty, but has a mutual hatred with Marlton. He acts as the group's leader following Die Rise.

Do not pray for easy lives, my friends. Pray to be stronger men.
Voiced by: Jim Meskimen
Appearances: "Five" | Ascension

The 35th president of the United States. He is forced to fight for his life alongside his allies and rivals when the Pentagon is overrun by zombies.

Secretary of State under President Kennedy. He's Kennedy's most loyal supporter and unofficial bodyguard during the attack on the Pentagon.

The Republican candidate for president who lost to Kennedy, who bears him no ill will and invites him to the Pentagon for a meeting with Castro.

The dictator of Cuba and leader of a Communist revolution. After the Cuban Missile Crisis, he meets with Kennedy's group to try to hash out a peace before they are attacked.

Let's slay some stiffs!
Appearances: Call of the Dead

Famous for her roles in Buffy the Vampire Slayer, Cruel Intentions, Ringer and others, Sarah Michelle Gellar is one of the actors working a film with George Romero until the zombie outbreak.

This must be a nightmare!
Appearances: Call of the Dead

The man who played Freddy Krueger in A Nightmare on Elm Street, Robert Englund is one of the four actors trapped on the set of the film he's making when the zombies attack.

You just fucked with the wrong Mexican!
Appearances: Call of the Dead
A popular and well liked former crook from works such as Machete and Sons of Anarchy, Danny Trejo has to put his toughness to the test in order to survive.
Michael Rooker

Michael Rooker has experience with zombies from his role in The Walking Dead. Never did he dream that he would be in a real life outbreak.

In general
A group of mobsters who have been incarcerated in Alcatraz for some time thanks to their own misdeeds. Their plan to escape goes awry as they are caught up in the zombie story when Alcatraz is overrun with the undead. Their attempts to escape and even to kill themselves are thwarted every single time, since they just keep coming back. Desperate to escape the hellish nightmare, the four learn the truth behind their fates, and must break the cycle if they've any hope of escaping and finding out where they are going from here.
Salvador "Sal" DeLuca

Let's get off this rock.
Voiced by: Chaz Palminterri
Appearances: Mob of the Dead | Blood of the Dead

A mob boss who was sent to Alcatraz for his crimes of bootlegging, gambling, and prostitution.

The harder you try not to feel… anything, the more it hurts.
Voiced by: Ray Liotta
Appearances: Mob of the Dead

A hitman who was sent to Alcatraz for a grand total of 116 confirmed cases of murder, and quite possibly more.

This is all just a game, isn't it?
Voiced by: Michael Madsen
Appearances: Mob of the Dead | Blood of the Dead

An Irish-American con man who was married to a silent film actress, whom then backstabbed him and got him sent to Alcatraz.

If they don't already suspect you they will soon.
Voiced by: Joe Pantoliano
Appearances: Mob of the Dead | Blood of the Dead

A con man who was also the money handler of Sal's mob.

As a whole
A group of four people who, one night where they were all at the Burlesque, fell asleep and woke up into a twisted version of their town.
Nero Blackstone

A master manipulator, veteran adventurer, and second-in-command to Scarlett.

A genius inventor and seasoned adventurer; her father Alistair was investigating the mysterious Order before suddenly disappearing. Though she was always skeptical, his final letter before his disappearance hinted that all his tall tales might have actually been true...

A hulking, brutish Frenchman with a gentle and remorseful soul. Formerly a member of the French Foreign Legion, now acts as a mercenary-for-hire.

An elderly alchemist and friend of Alistair. Serves as the lindquist, occultist, and overall "Smart Guy" of the group. Has a few nasty habits, however...

Voiced by: Kiefer Sutherland
Appearances: Dead of the Night

A rough and rumble cowboy, Gideon Jones just didn't seem to mesh well with the high class socialites. Regardless, he agreed to meet up with his friend Alistair Rhodes, only to find himself in a fight no one could have imagined.

Voiced by: BRIAN BLESSED
Appearances: Dead of the Night
A veteran general of the Boer and Zulu wars, the Brigadier had suddenly found himself in a brand new battlefield among the undead during a party hosted by his close friend, Alistair Rhodes. In spite of his age, his experience on the field more than formidable among the hordes of the undead.
Christina Fowler

Voiced by: Helena Bonham-Carter
Appearances: Dead of the Night
A fake psychic performing at Alistair's party was just doing what she does best when the Order came in and created a massacre involving the undead. Now forced to fight, she quickly proves to be much more prepared for the sudden fight than anyone could've thought.
Godfrey

Voiced by: Charles Dance
Appearances: Dead of the Night

Alistair Rhode's personal butler, and secretly a member of the Order. He quickly betrayed his master and proceeded to make sure there were no witnesses, but unfortunately was caught in a battle he couldn't avoid.