Muggle Power
aka: What Measure Is A Non Super 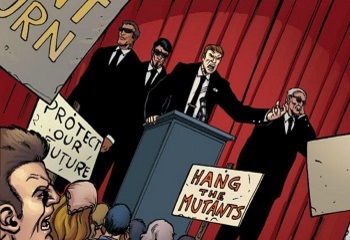 In a world with Differently Powered Individuals, what use are Muggles? They're weak, need protecting, are evolutionary dead ends and are of no real use. Even the Badass Normal on a team of supers can start getting depressed from this, and they are useful!

This usually serves as a motivation for individuals and groups who decide to "do something about it" rather than take it lying down.

Much like a super-power groupie, these people will try to get super powers by mimicking their betters, often at great risk by trying to replicate how heroes get their powers. If enough people get this idea, or the government gets behind it, then it becomes a case of Utopia Justifies the Means. This can include Organ Theft, free Super Serum, cyber augmentations half off, and in general making Emergency Transformations routine medical procedures. Interestingly, though this group means well, anyone aspiring to power (even if they want to share it) is inevitably misguided if not outright evil, because a muggle should Never Be a Hero. The route of Badass Normal seems to have much better odds, on the other hand.

These people usually come to this conclusion by adding some paranoia (justified or not) to Genetic Engineering is the New Nuke and fear that naturally born supers will out-breed or replace baseline humanity. They interpret the "obsolescence" of baseline humans as an edict to kill all Mutants/psychics/witches in an "Us or Them" fashion, fearing that supers will either forcibly take over or replace all humans. These types are usually spurred on by the villains' attempts to do just that, and end up branding all supers as threats. Previously nice supers, in turn, will interpret this xenophobia as cause to exterminate or enslave all humans... This is usually the fear behind any Super Registration Act. Typically accomplished by calling the Cape Busters. See also Tall Poppy Syndrome.

Whether the story chooses to address the underlying insecurity or not varies. When it does, it usually justifies baseline human's existence with a nice aesop like: our limitations drive us to excel, only humans can truly create, a world of all supers would devolve into planetary civil war (like we normals have done such a good job keeping peace without supers)... or, that we're so fundamentally bad that only a handful should have these powers, if at all. Since super-powered heroes are usually the focus of these stories, it's not rare to see a perfectly sensible initiative by the government to have its own supers, either to stop supervillains or to stop a hero if he should go rogue, turned into paranoid and militant unit bent on killing all heroes on the off chance of a super powered Social Darwinist takeover.

Post-Cyberpunk stories that include The Singularity often have conflicts between humans and post-humans. Earlier stories had Mutants on higher Evolutionary Levels that likewise were generally incapable of coexisting with their predecessors.

An interesting variation has the supers be vampires, werewolves, aliens, or some other "bad" race... or outright evil race. In which case those wanting power (or unwillingly transformed) are prone to Transhuman Treachery.

Sometimes this trope is unsure what to do with a Badass Normal.

Opposite of Comes Great Responsibility and Muggles Do It Better. Supertrope to Mutant Draft Board and Superhuman Trafficking ("If you can't join them, enslave 'em!")

Compare What Measure Is a Mook?, Ape Shall Never Kill Ape and Pro-Human Transhuman. Contrast Super Supremacist. A Sub-Trope of Fantastic Racism.

The Anti-Magical Faction is a variant of this trope that focuses exclusively on magic and those who can use it. This trope is very often a feature of Cape Punk stories. Not to be confused with some sort of special capability that non-magic users may have.