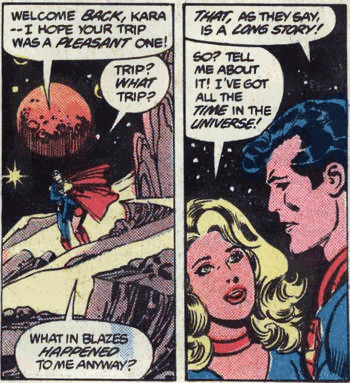 This is a phrase typically used when a character has finished an adventure isolated from the others. Since it is redundant to have them explain the events we just saw ourselves, the typical move to have the character answer the others' questions of what happened is with, "It's a long story" with the assumption that they tell it to them later, off-screen.

A variation can be used when the writers need to create a sense of mystery or suspicion about the recent off-screen past of a character. He will reappear or be found/rescued and when questioned by his compatriots will use this line and refuse to elaborate until the court-martial. "It's complicated" works the same way when it's used like this.

Occasionally subverted / parodied when one character says this in response to being questioned as to what is going on, only for another character involved to sum everything up in one sentence, thus proving that it's not actually that long at all.

Another subversion is for the person on the receiving end of the story to be not open to stalling, to say "I have time."

This phrase can also be used as a substitute for the explanation of a Noodle Incident.

Compare It Makes Sense in Context where this trope is used but not invoked, or To Make a Long Story Short, where the events are quickly recapped. Frequently overlaps (often simultaneously) with No Time to Explain, Don't Ask, You Do NOT Want to Know.