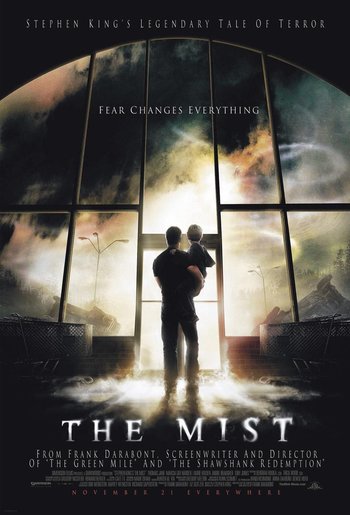 "There's no defense against the will of God. There's no court of appeals in hell. The end times have come; not in flames, but in mist..."
Amanda Dumfries: People are basically good. Decent. My God, David, we’re a civilized society!
David Drayton: Sure, as long as the machines are working and you can dial 911. But you take those things away, you throw people in the dark, you scare the shit out of them, no more rules. You'll see how primitive they can get.
Advertisement:

The Mist is a 1980 horror novella written by Stephen King for a horror anthology titled Dark Forces and later included of the 1985 King collection Skeleton Crew. The story revolves around some of the inhabitants of a small town in Maine who find themselves trapped in the local supermarket when, following a violent thunderstorm, a thick unnatural mist envelopes the area. While tensions arise within the group, the survivors face vicious attack from abnormal creatures prowling in the mist.

A film adaptation was released in 2007, marketed as Stephen King's The Mist. The film is written and directed by Frank Darabont, who had previously adapted Stephen King's work and had been interested in adapting The Mist for the big screen since the 1980s.

It features an ensemble cast including Thomas Jane, Marcia Gay Harden, Laurie Holden, Toby Jones, Andre Braugher, Alexa Davalos and Sam Witwer. Darabont began filming The Mist in Shreveport, Louisiana in February 2007. The director changed the ending of the film to be darker than the novella's ending, a change to which Stephen King was amicable. Unique creature designs were also sought to differ from creatures in past films.

A television series adaptation aired on Spike TV in 2017.

Not to be confused with Miguel de Unamuno's novella Mist, or with John Carpenter's The Fog (1980).

This Novella/Film Contains Examples Of: