Squad E is a unit in the Edinburgh Army composed primarily of foreigners from Gallia volunteering to fight the Empire. Lead by Claude Wallace, the unit had many notable accomplishments during Operation Northern Cross. After the events of Chapter 5, Squad E also consists of several officer-ranked members of Squad F.

For non-officer members of Squad E, consult the character lists of their respective classes:

Part of the esteemed Ranger Battalion of the Edinburgh Army and the primary viewpoint characters of the game. Lead by Lieutenant Claude Wallace, the group gained early notoriety by enrolling and later passing the ranger course together as a unit. Since then they have gained a reputation for completing dangerous and even "impossible" missions. Their motto is "It will be done". 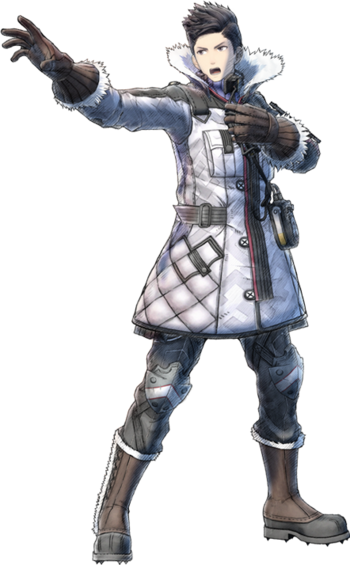 The commanding officer of Squad E. He commands a battle tank, the Hafen, in combat. 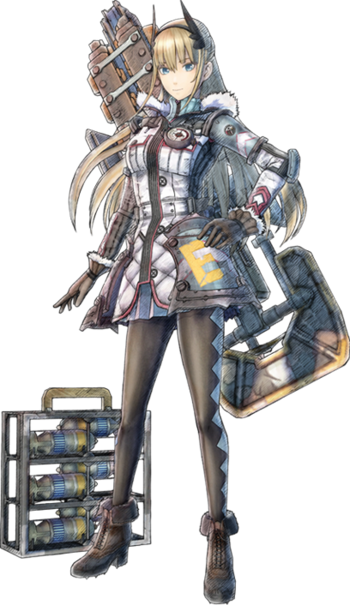 An inventor who specialises in ragnite technology, and a childhood friend of Claude's.

A hot-headed, foul-mouthed Darcsen who claims to be invincible due to his superior physical ability. He is one of Claude's childhood friends.

A skilled sniper who operates as Squad E's sergeant major.

Commander of Squad F with the rank of Lieutenant. She was one of Claude's classmates during his time at the academy and it was there she developed a fierce rivalry towards him.

Tank commander and primary engineer of Squad F. He has a very cold professional demeanor, and is quite loyal to Minerva. He drives the Glory, a customizable Gallian light tank that was purchased for Squad F.

One of the Squad's mechanics and tank driver for the Hafen, he knows Claude and company from their military training days (except Riley).

Another mechanic and driver of the Cactus. Very serious about his work ethic in maintaining the squad's vehicles.
Angelica Farnaby 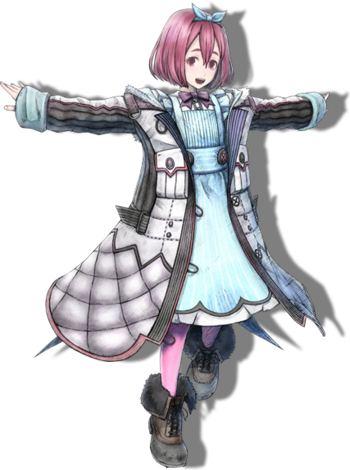 An amnesiac, yet cheerful and kind-hearted civilian girl who is found by Squad E in the Centurion's Forbidden Zone. 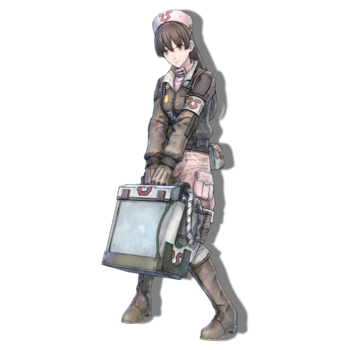 Born to an all-male household and the eldest child, Karen's medical training is proficient to treat male soldiers. She serves as Squad E's lone nurse who doubles as a medic. Karen wanted to attend medical school, but decided to join the military instead.
Ragnarok

Known as Rags, the dog becomes the Squad's mascot and team pet over time. He was a former stray dog.