Characters / Knights of the Old Republic I 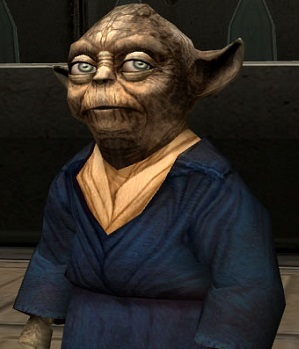 A member of the Jedi Council. He is of the same species as Yoda.

"The lure of the dark side is difficult to resist. I fear this quest to find the Star Forge could lead you down an all too familiar path."

A particularly stern member of the Jedi Council. He returns in the sequel, where the Exile searches for him on Dantooine.

A Twi'Lek Jedi Master in the council of Dantooine. He was a master of Revan and Malak.

Adopted son of Hidden Bek leader Gadon Thek. He defected to the Black Vulkars after Gadon refused to make him leader.

A high-ranking member of the Exchange, Calo Nord's and Canderous' former employer, and the owner of the Ebon Hawk.

Carth Onasi's son, who was presumed dead following the destruction of Telos.

An old friend of Jolee Bindo’s who's been accused of murdering a Sith woman on Manaan.

Zaalbar's elder brother, the one responsible for his exile and Czerka Corp's increased presence on Kashyyyk.

The cold and estranged mother of Bastila Shan.

The conman older brother of Mission, who raised her as a kid.

A species of amphibian humanoids with tall craniums and two eyes on short stalks on each side of their heads, the Rakata were a very advanced race with a strong connection to The Force, who created the infamous Infinite Empire and ruled the Galaxy with an iron hand before their eventual downfall.

A soldier who served under Canderous in the Mandalorian Wars.

A slaver with a connection to Juhani's past.

The Genoharadan and their targets

A mysterious and ancient guild of bounty hunters, the Genoharadan claim to work in the name of the Republic from behind the scenes, assassinating individuals they believe might endanger the status quo. They are known only to a select few in the upper echelons of the Senate... up until you successfully eliminate an infamous bounty hunter - whereupon the Genoharadan extends you an invitation to work for them.

Your contact in the Genoharadan; first encountered on Manaan, he will only talk business with you and you alone.

A slaver who got the attention of the Genoharadan after kidnapping the daughter of a senator; the girl managed to escape the situation alive, but he's being targeted for fear he might try ransoming another hostage in exchange for political secrets. He can be found on Dantooine, at the Matale estate.

An anti-Republican terrorist, Lorgal is directly responsible for two dozen bombings and hundreds of deaths, all intended to bring down the Republic. He has recently been arrested, and is looking forward to his trial - as it will give him the perfect chance to spread his beliefs to a wider audience. As such, the Genoharadan want him silenced before his day in court. He is current incarcerated at the Republic base on Manaan.

A freelance bounty hunter with a sadistic streak, the Genoharadan want him eliminated as both a competitor and a threat; quite apart from being extremely skilled, his wanton cruelty has the potential to cause serious political damage if allowed to continue. He can be found in the Dune Sea on Tatooine, where he is currently hunting for a Krayt Dragon.

A shapeshifting assassin of unknown origin, Rulan is responsible for a number of high-profile killings across the Outer Rim of the galaxy. The Genoharadan fear that he might be considering a move to the Galactic Core, where he can wreak havoc on politically important planets like Coruscant, perhaps even taking out contracts on the Senate - hence why they want him dead. He can reportedly be found honing his skills in the Shadowlands of Kashyyyk.

A professional con artist and blackmailer who has robbed millions from wealthy families across the galaxy, he commonly poses as a dealer in rare antiques so he can get close to affluent buyers. However, he also has a sideline interest in trading in secrets, which the Genoharadan consider far more politically dangerous even than his blackmailing practices - and much more worthy of assassination. He is currently on Manaan, though he never shows his face in public and only arranges for meetings via his assistant Vek.