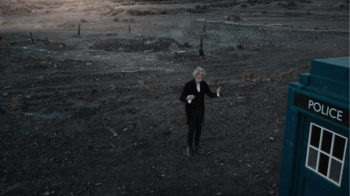 "A life this long, do you understand what it is? It's a battlefield, like this one, and it's empty. Because everyone else has fallen."
"Can't I ever have peace? Can't I rest?"
The Twelfth Doctor, "Twice Upon a Time"

The Lives of the Doctor

Hell, the Doctor's been a woobie from the start. Let's see: Forced to run from their own people, they've found themselves placing the people around them in danger, and despite their best efforts to keep them safe have failed in one of the biggest Tear Jerkers of all television, have tried time and again to bring out the innate goodness in all life and then end up forced to kill once they realize there's no other way, and have continually been forced to regenerate, which doesn't always end well...