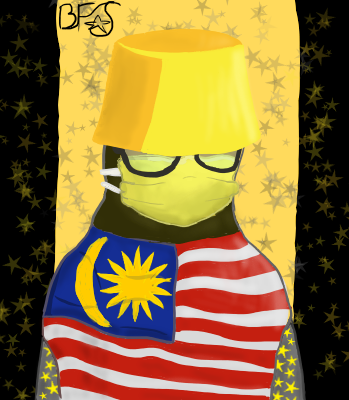 Multifandom Malaysian Muslimah (might add a different background to portray the "multifandom" bit) (drawn with Fire Alpaca)
"The greatest jihad (struggle) is to battle your own soul, to fight the evil within yourself"
— Prophet Muhammad (ﷺ)
Hello there, I'm just another troper who happened upon this site and made an account sometime in August 2020 to make use of You Know That Show, then gradually got accustomed to the site and hooked as a result. A fair amount of my contributing goes towards local (Malaysian) works and anything related or in between, or general cleanup, with a few oddballs here and there.

If you find a video example where the audio cuts in the final second or so, chances are that I probably uploaded it, cuz Filmora's a meanie, though I've worked around it as best I could. See a full list in the "Troper Contributions" folder below.

Work pages and respective subpages: Solely subpages and others:

Image Pickin (of what I recall)

Tropes/Info regarding me
Just some info, probably not the overly personal stuff. Hopefully.

Tropes to add: Safety in Indifference, Ridiculous Procrastinator (How ironic), Freaky Is Cool?

Favourite works (WIP)
Because a list of everything I liked, even those I grew out of liking or only liked a little, make too long a list. Restricting it to favourites I may comment on for the sake of conciseness.

A majority of the media I watch tends to be animated. Whether I'm into it for the story or just getting a laugh out of it, I like them all just fine since they're meant for entertainment. (Maybe splitting this to Asian, Other, and Western.)

Genre-wise, I'm rather flexible to what sounds nice, but my favourite noises range in rock, metal and electronic. A mix of one or more tends to be music to my ears too. There was a time when Nerd Core occupied the majority of the music I listened to.

I'd consider myself a casual gamer. As in "mostly plays browser games" type of gamer, and mobile ones on occasion. I seldom spend to play, and often watch gameplays for games I'm uninclined or can't get to play myself.

Games I've only seen others play 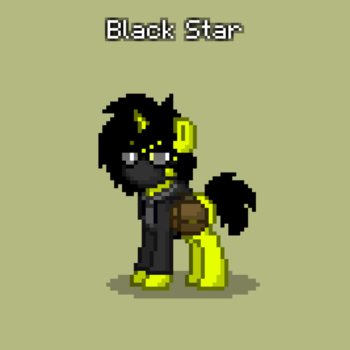 My first legit OC, whose name makes up two-thirds of my internet handle. Unmasked and showing cutie mark 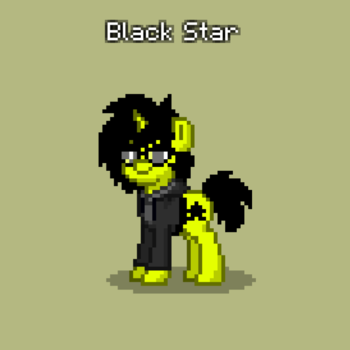 For OCs and the like. Black Star here was initially the image atop the page but I have a different idea for what to place there. Many of my original characters are Author Avatars simply because of my Author Appeal towards interactions of different aspects of self. Frankly, I initially thought all OCs were self-inserts (then again, each character we make pertains some personal value in some form, don't they?) and rolled with it. Many of said OCs had unofficial alterations as I developed over the years, as I never officially documented the majority of them, just having them sit or float around in my head.

An exercise in besting internal turmoil was the goal, and the idea to do so sparked the creation of beings inside oneself to fight. They changed with time, from allies to enemies to somewhere in between, though the extremities in particular came around in 2019 as a group of 3 personifications of mental constructs on a sliding scale of extremes, the third being an unhealthy mix of the other two mentalities. The mind that made them, too unstable to finalise their fractured story but unwilling to erase their progress, instead extracted them from their abstract setting to be revised.

The most positive of the group as she is meant to embody the white side of Black-and-White Morality. However, as an extremity, she was constructed to explore the idea that too much of anything, even happiness, can be bad.

Initially the middle-person for Muna and Fiq who became bent by not balancing their mentalities healthily, craving chaos instead.

"Faith" (placeholder name to be replaced)

The fourth who was added to sustain order in the group, even before being revised as an extremity of order itself. Faith was her former name as a creator stand-in until she was reconfigured as Alias' opposite.

Muna's opposite and equal, representing the black end of Black-and-White Morality. Heavily reclusive, cynical and brooding

The most recent addition to the group. Initially a persona stand-in after (formerly named Faith) to guide the extremities, she also acts as a leader to prevent transgressions.
Fun randomness + lists
Forum Game threads I made: The 3 Characters I'm most like (still finding them) Candidates? Starlight Glimmer? (May need to rewatch but this post

gave me stuff to consider), Stygian? (too bad he wasn't explored all that much, most of his story pertains to fantastical elements or skills in strategy I may lack, but both of us are aspiring/prolific writers), Priya from Turning Red? Watchlist: Stuff to check out in the future

Commenting on Relationship Statuses (because why not :p) (WIP)

Realistically speaking, my relationship status is: not set. TV Tropes has more creative terms, however, but mind that I am likely blind to whatever they're referencing. Only doing the ones I'm compelled enough to use for whatever reason.
Advertisement:

to know my views on a certain topic. If unavailable, this Quora answer