This character sheet includes the characters in both BoBoiBoy and BoBoiBoy Galaxy. 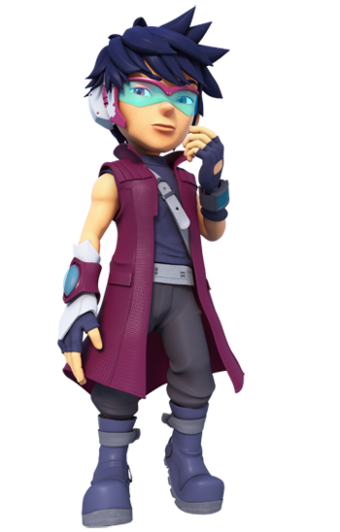 The Rival later The Lancer
Boboiboy's main rival. He made his debut as an aloof and cold student who disliked Boboiboy due to the other being more popular than him. He has the power to manipulate shadows, which he accidentally obtained from Ochobot after saving him. He slowly becomes a good friend toward Boboiboy and the others. As the story progresses, he confirms that he isn't human, but an alien. He was sent by his own brother and superior, Captain Kaizo, to obtain the power band, so Kaizo can protect it from being abused in the wrong hands. 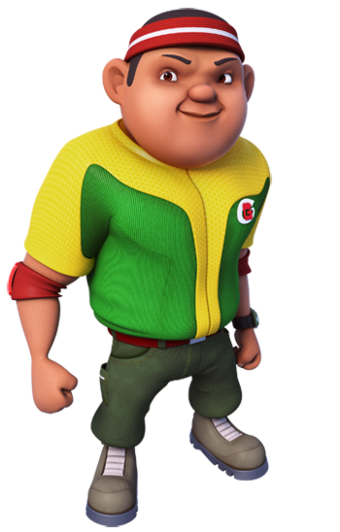 The Big Guy
Gopal Kumar is Boboiboy's best friend. Even though he's naive and a coward, he's still able to hold his fight in very critical conditions. Ochobot gives him the power of "molecular manipulation", where he can transform any object to anything he thinks about. Since he's a huge fan of food, he always uses his power to change objects into food.
Yaya Yah/Hanna 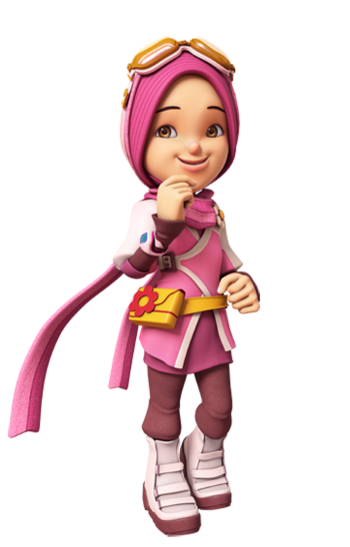 A Nice Girl heroine but once you mess with her, you are in serious trouble
Yaya (or Hanna in international version) is the main character also one of the main heroine of the series. She is Boboiboy's grandad's neighbor and one of Boboiboy's closest friends. She is the second person who received a power from Ochobot, and her main power is "gravity manipulation". At school, she is acknowledged as the smartest student at their school.
Ying 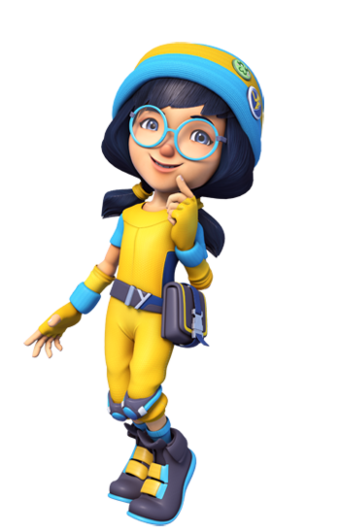 I'm Ying!
Ying is a Chinese girl and also Yaya's best friend. A nice, hot-blooded but shy girl, also like Yaya, she's considered as one of the smartest students in their school. Ochobot gave her the power of time manipulation, which at first was mistaken as "super speed".
Ochobot
A Power Sphere and Robot Buddy of Boboiboy and his gang. He is the source of their superpowers.

Granddad
Granddad or Tok Aba in Malay is Boboiboy's grandfather. He lives in Rintis Island and owns a cocoa shop, where Ochobot and Boboiboy always help him in their free time.
Papa Zola
Mama Zila
The Parents
This section refers to all the main characters' parents.

Captain Kaizo
Kaizo is Fang's Aloof Big Brother who made his appearance in episode 24 of season 3. He is the leader of his own team and also a member of T.A.P.O.P.S. Kaizo is also known as Legendary Space Rebel with his exceptional skills of swordsmanship and energy manipulation.
Lieutenant Lahap
Lahap is Captain Kaizo's incredibly loyal right hand man. Or, alien for that matter.
Klamkabot
The first Power Sphere with the power of teleportation.
Koko Ci
A spaceship janitor who is later confirmed to be a spy from an organization named G.A.G.A.L. He returned in "Boboiboy Galaxy" as Commander of T.A.P.O.P.S.

Allies From in Boboiboy Galaxy

Cattus and Bellbot
Cattus is a cat-like alien who comes from Gurunda Planet. He has a power sphere named Bellbot, where he bestowed a power of size shifting.
Admiral Tarung
Tarung is Admiral of T.A.P.O.P.S. Initially, he retired from his position and now works as a conservationist, specializing in taking care of endangered species. After recieve a secret message from Koko Ci, he return to his old position in T.A.P.O.P.S
Sai and Shielda
Sai and Shielda is pair of twins who is the member of team Kaizo and one of member of T.A.P.O.P.S.
Tok Hang Kasa
Tok Kasa is Old Master who make debut in Boboiboy : The Movie 2, where the Heroes decide to sought him to be trained by him for sake of defeat Retak'ka
SPOILER CHARACTER

''Don't worry. Let him do by himself, he need to prepared to faced another huge mission"

Amato is mysterious hero who appear in post-credit scene in Boboiboy: The Movie 2. He seen speaking with Maskmana. His heroes name is Mechamato.

The main Big Bad through Season 1 until in the middle of Season 2. He is an outcast alien from Atata Tiga, who explore the entire galaxies to find something to make him hailed as hero of his planet.

Probe
Adu Du battle robot and his The Dragon.
Adu Du's Computer
Bago Go
A space Arms Dealer from Atata Tiga.
Ejo Jo
A former elite soldier who become space bounty hunter. He is used to be Adu Du rival at their youth.
Boboibot
Bobobiot is one of Adu Du's creations, which was built by him based on Boboiboy to destroy and kill him.
Bora Ra and Tengkotak
Tengkotak is a rogue and notorious power sphere hunter who is a main Big Bad in the first Boboiboy the Movie. This group was lead by Bora Ra. After Bora Ra death, the rest Tengkotak member are captured.

Captain Separo
Captain Separo is one of Power Spheres Hunters that capture Power Spheres for his own personal gain. He is the head of Space Pirates that are willing to do anything to get what he wants.
BAD DUDES
The group of Power Sphere hunter which is consist three space Monster Clown. Their base were in a Circus planet.
A.B.A.M/B.R.R.O
A.B.A.M. (Accurate Ballistic Arrow Mercenary) , known as B.R.R.O (Ballistic Robot Ranged Offense) in the English Translation is a power sphere hunter who become Cattus sort-of Arch Enemies .
Captain Vargoba
Captain Vargoba is the leader of Space Pirates Colony.
Retak'ka
A Big Bad and Supervillain who made his debut in Boboiboy: The Movie 2.