The main good guys in the series, the Striders are an organization of freelance mercenaries who claim descendance from the ninja of ancient times. Their agents are experts in fields such as subterfuge, demolition, espionaje and assassination; and carry out assignments to their very end, even at the risk of their lives.

The Striders' organization is the central focus in the manga's story, while serving a simple background role in the games themselves. 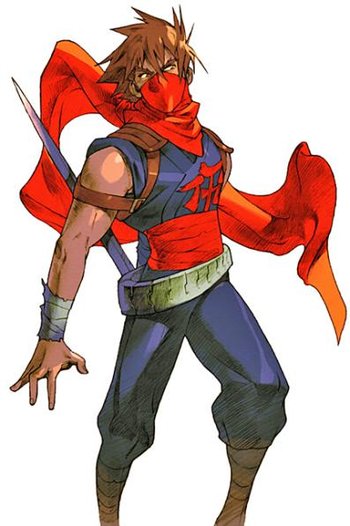 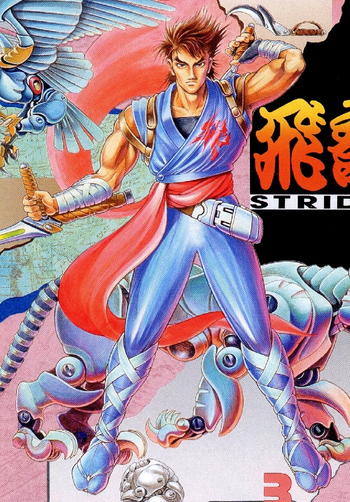 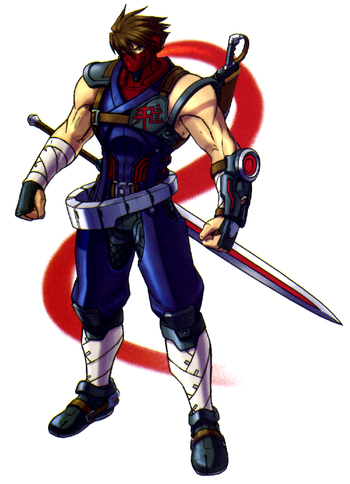 for his portrait from the 2014 Remake.
Voiced by: Kaneto Shiozawa (Strider for PC-Engine), Kosuke Toriumi (Strider 2, Namco's ''Cross'' series), Marc Biagi (Strider 2014), Yuji Ueda (Japanese, Marvel vs. Capcom series), T.J. Storm (English, Marvel vs. Capcom series)
"You must be kidding. Are you sending a toy into battle?"
The main protagonist of the series. An orphan since he can remember, Hiryu joined the Striders at a young age and survived its training program to become the youngest member in the organization's history to attain the highest rank, Special-A Class. An specalist in sabotage, assasination and espionage as well as an expert of martial arts, Hiryu favors the use of the Cypher, a plasma-enhanced sword wielded only by the best members of the Striders and capable of cutting through virtually any material effortlessly. A Consummate Professional of few words, he's the strongest Strider in history.
Kain
"No telling what evil lies ahead... personally, I'd prefer a cute girl...!" 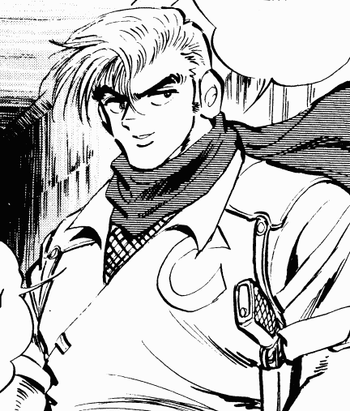 Hiryu's best friend since training school and a Special A-Class Strider. Although he conducts himself like an aloof goof during missions, this is merely a facade he hides under, and in truth he's a very competent Strider who knows when to start taking the situation seriously, and established to be unrivaled in the Striders when it comes to fighting skills, standing on equal grounds to his friend. While in the middle of a mission in the Kazakh Federation Kai ends up captured by enemy forces, and is up to Hiryu to rescue him...under orders to eliminate him for having been captured. 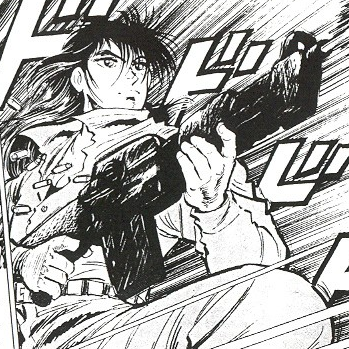 "Well, now that you're back, Hiryu... there's nothing left to fear!!"
Hiryu and Kain's close friend, also from way back in training school, and an A-Class Strider with a preference for firearms. She appears distant and stern most of the time, and is a woman of few words during an assignment. In the manga, after Kain was captured by the Kazakh Secret Police, Sheena stood behind to try and rescue him, and is eventually reunited with Hiryu. Together they track down and rescue Kain, although Sheena is unaware of Hiryu's orders to kill him. In the NES adaptation, she's entrusted to take care of the injured Kain by Hiryu as he leaves to destroy the ZAIN Terminals, but Kain eventually slips out and she has to search for him, worried over his wounds.
Director Kuramoto 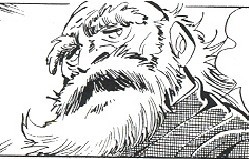 "You've gotten stronger, Hiryu"
The aged founder and Director of the Striders. In his prime he was a respected and feared Strider himself, gaining himself the title of "God of Death". In his old age, however, he appears to have lost his edge and is now close to senility, spending most of his days alone in his personal room at HQ, watching his collection of Japanese films, leaving Matic unopposed control of the group. Hiryu treats him with the utmost respect, and Kuramoto likewise considers him like a son.
Mariya
"H...Hiryu...what on Earth...have I..."
Hiryu's sister and accomplished Strider as the first woman ever to reach the A Class in the group. One day, however, something went wrong and Mariya turned insane, killing around 10 Strider trainees. As no one could match her skills, Hiryu ended up being selected for the mission, and although he tried hard to reach her with words, he finally was forced to stab her through with his Cypher in self-defense, killing her on the spot. As Hiryu dearly loved her, this would eat away at his mind for a while and eventually lead to his resignation from the organization.
Ryuzaki

"Go after Matic! It's all his scheme!"
A character from the NES Strider, Ryuzaki is a low-rank Strider the player runs into at some points in the story. He's working on his own behind the scenes and has seemingly discovered Matic's betrayal of the group, so he helps Hiryu by providing hints in certain stages to proceed or to find useful items such as the Attack Boots.
Matic
"Striders can only die in battle. That is a Strider's destiny..." 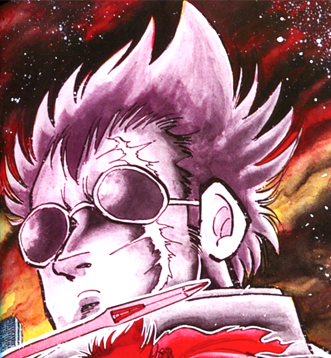 Vice-Director of the Striders and main antagonist of the manga and NES game. Following Kuramoto's semi-retirement, he has taken up de-facto control over the organization, and has secretly struck an alliance with Enterprise to help the development of the ZAIN mind control weapon. Matic is cruel, amoral and ambitious to no end, and his ultimate goal is to take over the world with the Striders' power and Enterprise's technology on his side. He fights with a customized Cypher of his own, and favors manipulation, underhanded tricks and dirty tactics. 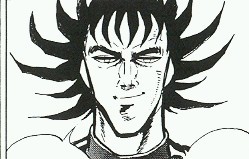 One of Matic's subordinates. A Special A-Class Strider whose specialty is the use of a fine, almost imperceptible razor wire to set up trap zones capable of cutting up flesh by mere contact, or otherwise ensnare and capture targets. The way he uses the wire is comparable to a spider's web, and he himself acts like one and keeps pet tarantulas around him at all times. He was tasked by Matic to stop Hiryu and Kain at the Amazon.
Kubira 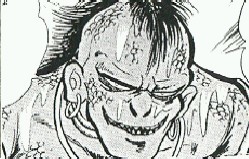 One of Matic's subordinates. An A-Class Strider who has subjected himself to Bio-Augmentation, turning himself into a scaly, reptilian-looking monstrosity with enhanced water-fighting skills, being able to breath and move with incredible speed and precision underwater. Kubira has known Hiryu from their time at training school, and he's well aware of his skills with the Cypher, and has prepared his own strategy to counter and kill him. Ordered by Matic to assist Arana in stopping Hiryu and Kain.
Dragon Fiend
One of Matic's subordinates from the NES Strider. A Strider who fancies himself as a samurai, fully clad in a red, samurai armor and wielding a katana with plasma-shooting capabilities. Dragon Fiend was tasked by Matic to keep watch over Kuramoto at his residence in Japan and kill anyone who attempts to see him.
Badger
One of Matic's subordinates from the NES Strider. Quite a stout fighter, Badger chooses to fight wielding a short sword and a large riot shield, slowly approaching his enemies while keeping his shield in front of him at all times. Hiryu first runs into Badger in the Chinese base, and he'd face him a few more times afterwards.
Flash Blade
One of Matic's subordinates from the NES Strider. A quiet Strider decked in a purple uniform, he wields two long blades on each hand which he uses to block attacks by crossing them in front of him, and to perform a top spinning attack which sees him fly all around the room like a tornado. Seemingly a close subordinate to Matic, he's only faced in the game's final chapter.
Navigator
A character introduced in the PC-Engine port of Strider. A member of the group who assists Hiryu from the Strider Base with intel about the mission and the areas he visits.
Hinjo
The main character in the non-canonical Strider Returns, a simple white and neon green palette swap of Hiryu's sprite. Hinjo has not much going on about him, outside being touted as the "most pumped out Strider of them all" and having to go on a quest to save his girfrield from "The Evil Master".
Hien 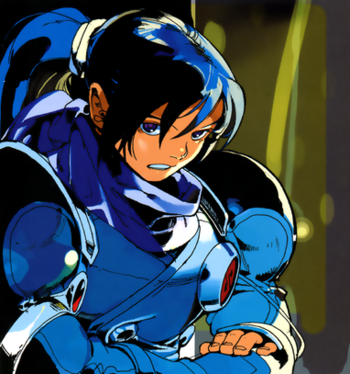 Voiced by: Kosuke Toriumi (Strider 2, Namco × Capcom)
Introduced in Strider 2, Strider Hien is a Special-A Class Strider and a close friend of Hiryu, having worked together in several missions beforehand. Feeling jealousy of Hiryu's strength and reputation among the Striders, however, Hien decided to betray them and join Grandmater Meio, releasing the overlord from its confinement and sabotaging the Striders, leading to their elimination. Still caring about his old friend, however, Hien will attempt to coerce Hiryu into dropping his mission to assassinate Meio and join him, citing the futility of his mission now that the group is gone and the fact Meio is the Creator of the world and how pointless would be to oppose him.